All you need to know about John Hughes

Proven SPL and Scottish Championship boss John Hughes has taken the reins at East End Park in a bid to haul The Pars clear of relegation trouble.

With a 17-year playing career and an 18-year managerial career so far, Hughes has been involved in the Scottish game for 35 years and is highly respected.

If you’d like to know more about Hughes’ past achievements as a boss, read on as we reveal the highlights of his career to date.

Hughes concluded his playing career with a second spell at Falkirk. In the second year of his time with The Bairns, he was offered the chance to work as joint-manager with Owen Coyle.

Coyle later departed for Dundee United, with Hughes taking the job on his own. Within two years at the helm in sole charge, Hughes steered Falkirk back into the Scottish top-flight and four years later took them to a Scottish Cup Final, narrowly losing to Rangers at Hampden Park.

His successes with The Bairns saw Hughes touted for the vacant Hibernian hotseat, which he took in the close season of 2009. Hughes led the Hibees to fourth place in the SPL and Europa League qualification. However, a dismal start to the 2010/11 campaign saw him dismissed in October 2010. Hughes then spent nine months in charge of Livingston, before being tempted south of the border to take charge of struggling League Two side Hartlepool United.

On a hiding to nothing at Hartlepool United

Hughes arrived in the north-east of England at United without a league win in 20 games. Hughes certainly stemmed the tide and oversaw an upturn in fortunes, but the damage was already done, with the Monkey Hangers relegated to the National League. Despite pledging his future to the club, Hughes was relieved of his duties in May 2013.

Unprecedented success in the Scottish Highlands

Hughes then returned to the SPL for a three-year stint with Inverness Caledonian Thistle. Hughes steered Caley to a Scottish League Cup final in his debut season and a Scottish Cup final victory in the following year – ironically against his former employers Falkirk. 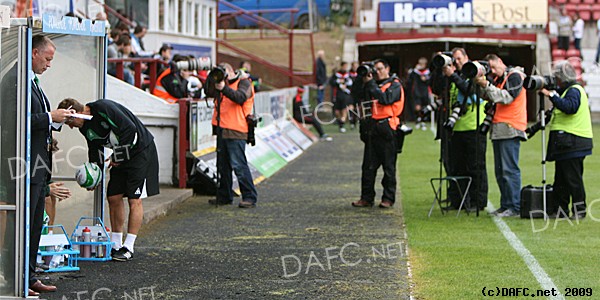 Hughes left later in the season following a disagreement with Thistle’s owners regarding the ongoing first team budget. Surprisingly, he was left unemployed until Championship side Raith Rovers appointed him in February 2017.

With three months of the season remaining, Hughes and assistant Kevin McBride were unable to arrest Rovers’ slide into the relegation playoffs, where they would be shock losers to League One Brechin City.


One of Hughes’ most impressive feats as a manager came last season during his brief sojourn with Ross County. The Staggies were floundering near the foot of the SPL table when Hughes took over. Furthermore, they didn`t have a bulging squad that could enable Hughes to handle the proven effects of congested fixture schedules using squad rotation.

Against all odds, Hughes and County won three of their last five SPL fixtures to move themselves three points clear of the relegation playoff place. Despite what the club described as one of its “most difficult campaigns” in the SPL, Hughes’ success did not encourage him to sign a long-term deal at Victoria Park.

is by no means ‘mission impossible’, says Hughes
County’s loss is now Dunfermline’s gain. The 57-year-old is now tasked with helping The Pars retain their Scottish Championship status in 2021/22.

With just one win in 14 games, Athletic are rooted to the foot of the table but are fortuitously just three points behind sixth-placed Ayr.

During his first official interview with the club website, Hughes admitted he “doesn’t have a magic wand” to turn The Pars’ fortunes around.

However, he believes the squad is good enough and that a lack of confidence has resulted in a “lack of momentum” at East End Park.