Allan Johnston has parted company with Dunfermline Athletic Football Club after three and a half years at the helm of the Pars.

The former Kilmarnock manager replaced John Potter in the summer of 2015 after Athletic finished 7th in League One.

AJ successfully negotiated his way through Scotland`s third-tier at the first time of asking, as Dunfermline romped rk the title.

Since the clubs return to the Championship, it has seen progression year upon year with Johnston initially finishing fifth and narrowly missing out in a promotion playoff place before, last term, achieving the minimum aim of 4th spot: despite losing out in the quarter-final`s of the promotion playoffs, it was seen as a successful season for the Fifers.

Hope and expectations were raised coming into this campaign with an impressive BetFred Cup Group Stage - seeing 4 wins out of 4, including a victory away to Premiership side Dundee - had Dunfermline fans dreaming of another prosperous season under the stewardship of the ex-Queen of the South boss.

Unfortunately, form was inconsistent following the bright opening and Dunfermline have slid to 7th in the table, just 9 points off bottom spot. However, only 4 points away from fourth suggest all is not lost and the Board of Directors clearly feel some fresh impetus may resurrect the East End Park sides season, in what is a very competitive division.

In total, Allan managed 168 competitive games while in the dugout alongside assistant manager Sandy Clark. The duo clocked up 79 victories in their time in charge; drawing 44 matches and losing 45 throughout their tenure. That equals a win ratio of 47%, which is nothing to be ashamed of.

In the end, it is with a heavy heart that both Johnston and Clark have left the club after a reasonably positive 42 or so months in West Fife.

Tensions were clearly high over the course of this season so far and many supporters seemed to lose faith within the management structure and this was evident quite clearly at recent matches, none more so than the last match in charge for the duo, versus Alloa Athletic, as a second half Alan Trouten double saw the Pars lose a 2-0 half-time lead. It proves how tight a division this is, with one slip allowing the striker to score and Johnston has suffered the consequences.

While fans may be glad to see fresh impetus and possible change brought to the team, the group of players are more than capable of climbing this division and I am sure that despite the vitriol towards those in the dugout recently, in the cold light of day, the efforts of AJ and SC will be remembered in the future, after bringing the club back up to Scotland`s second-tier, as well as overseeing major developments to the off-field structure with a newly improved scouting system; a new gymnasium, the introduction of Sports Science through Gary McColl, and so on... 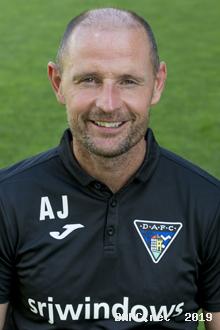 All that is left to be said is thank you for your time, dedication and professionalism while in charge of DAFC and good luck for the future!