It was the annual awards for the Scottish Football Supporters Association (SFSA), with one special Dunfermline Athletic Football Club supporter winning the `Fan of the Year` award...

The event saw star names such as Steve Clarke; Denis Law and Andy Robertson picked up trophies within their respective categories, but, it was the achievements of one Pars fan which has caught the attention of many.

Marvyn Stewart, also know as Steaua from the forum section of this website, has volunteered and aided the club in many ways before and after administration hit the club in 2013. 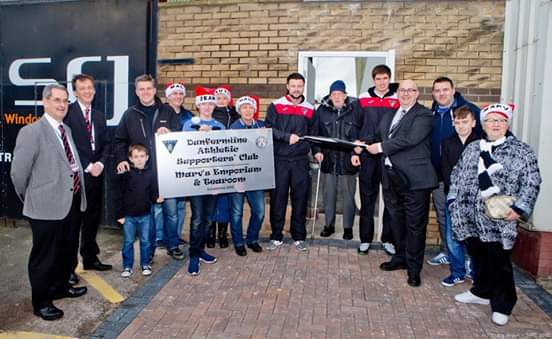 However, in most recent times, she has caught the attention of many - both Pars supporters or opposition supporters who attend East End Park.

For the past few years, we have seen "Marv`s Emporium / Tea Room" which has raised over £50,000 for the football club! 👏

Initially, the venture started out by selling old match-day programmes, football kits or other such memorabilia that was donated to Marvyn. It was clear very early on, though, that this would be no short-term solution for her beloved Athletic.

After moving premises to the corner of the Main Stand, the Emporium has gained much welcomed recognition far and wide; up and down the country.

The dedication of Marvyn could never be questioned: despite having other priorities in life and voluntarily giving up her own time, she has bonded together a group of helpers who cook, sell or do anything else that needs done.

These days, you`ll traditionally see Steaua advertise her opening times on the forum - yes, it isn`t just match-days that she opens her doors!! To have regular custom throughout the week when there`s not many people at the stadium emphasises the incredible feat which has been achieved. 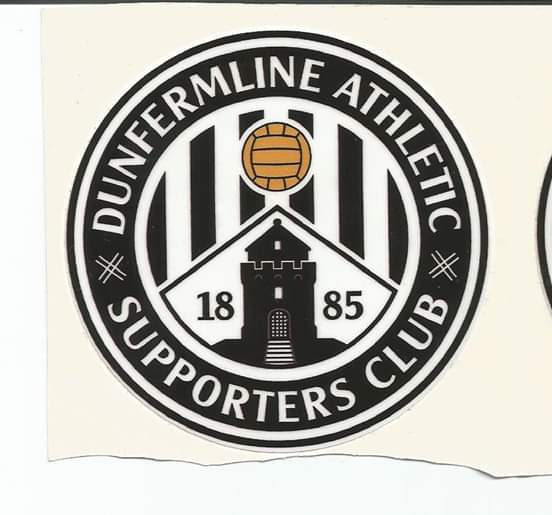 With over 4000 views and 50 responses to the thread announcing her award on the football forum, it indicates the strong feeling of goodwill by her fellow friends and football colleagues. Speaking to this website, Marvyn commented:

"I think it is a great award, not only for myself: not just from the Administration period, but, for right down the years too. I would like to go back to when Kenny Cowan and I sold club merchandise from a market stall outside the old ticket office and before the club had a shop, approx 30years ago...

It is a superb award for the club and I would like to include all the volunteers who have worked in the Hub since it opened. To think I started it with just four shirts (from Netta McKenzie) and the Dunfermline Athletic Supporters Club (DASC) kindly gave me their wee office to sell the shirts out of and it has just snowballed from there. We have given the club £50,000.00, up to now, with the hope we can continue. I am very proud to have received this award and I would like to thank everyone for their support and voting for me."

Massive congratulations to the new SFSA Fan of the Year - MARVYN STEWART! 👏

A thoroughly deserving winner of the `Fan of the Year` award from the SFSA - it shows the high regard Marvyn is held in amongst the fans of Scottish football and the terrific work she is doing on behalf of DAFC.

From everyone here at dafc.net, we`d like to congratulate Marv on her fantastic work and wish her every success for the future with the continued fundraising she will undoubtedly achieve.

The SFSA hold these awards on an annual basis

Find below the full Press Release from the SFSA.

The SFSA’s Fans Awards were run in partnership with GambleAware, the leading charity in the UK committed to reducing gambling-related harms.

Clarke won the manager of the year award ahead of Ayr United’s Ian McCall who was voted into second place, both ahead of Celtic’s Brendan Rodgers who was third.

The poll carried out by the SFSA saw nearly 2000 votes cast.

‘Goal of the Year’ went to James Forrest for his fantastic second goal against Albania in Scotland’s’ 4-0 victory in Shkodër. Adam Hammill’s incredible strike for St Mirren from inside his own half in a 2-2 draw with Hibs was voted as the second best.

In an incredibly difficult category, Dunfermline Athletic fan, Marvyn Stewart was chosen as the Fan of the Year award winner. Since the club fell into administration, Marvyn has raised over £50,000 for her club through numerous fundraising efforts.

Joint top goalscorer for the Scotland international side and Manchester Utd legend, Denis Law received a Lifetime Achievement Award in recognition of his contribution to Scottish football.

A Special Achievement Award has been made to Shelley Kerr, Scotland’s Women’s team manager, for guiding Scotland to the World Cup finals in France.

Scotland’s ‘Best Ref’ was named as Craig Thomson who beat John Beaton and Steven McLean to the title.

Aberdeen fans were knocked off the top spot this year by Hibs fans who were named as the country’s top travelling fans. Hearts fans were named as runners-up with the Dons fans coming third.

Tynecastle retained its position as the ground most away fans like to visit for the third year in a row with Ross County as second favourite, ahead of Kilmarnock’s Rugby Park.

For the third year running, Mascot of the Year went again to Partick Thistle’s Kinsgley.

Alana Watson, Director of The SFSA said: “It’s been another great year for Scottish football fans with so many talking points and wonderful highlights. Having an independent vote by customers of Scottish football, the fans, means that fans get to award who they think have made the biggest impact. Having fans at the heart of decisions made in Scottish football is vital. Well done to all winners and thanks to everyone who took the time to vote.”

Iain Corby from GambleAware said: “Football fans are the lifeblood of the game and it plays a huge part in the lives of people every day. Across Scotland there are over 230,000 people who are classed as either problem gamblers, or at risk of becoming so, and many of these are football fans so we GambleAware is delighted to be a partner in these important awards. This partnership helps us find a way to ensure fans are aware of the risks of gambling, and know they can come to us for free help and confidential advice if they are worried about gambling. By being the SFSA’s charity partner for these prestigious awards, we also hope we can encourage discussion about the relationship between football and betting in Scotland.”

The SFSA is a not-for-profit, members’ body open to everyone, whether they are individuals, supporters groups or affiliates. It currently has over 70,000 members. This is its third Scottish Fan Awards poll.

For further information on the SFSA and the Fans Awards, please contact Paul Goodwin on 07702-252519.