Any worries that the Pars might rue their first half profligacy in front of goal were dispelled 80 seconds into the second half when David Graham scored the first of a brace. Further goals for Buchanan and Kirk led the Pars to a comfortable victory.


Central Park is not a place I’m overly familiar with. I remember a dreadful game there in 1984 when Scotland were winning the Triple Crown, my masochistic pleasure in the low quality fare on offer being ruined by a rather good Gavin Tait goal and a Ziggy Bowie winner. And then there was our last visit back during Jocky Scott’s stewardship, when the sudden appearance of Jim Leishman on the terracing caused a bit of commotion, a fact noticed on the pitch by Paul Smith who made a beeline to salute the Bard of Lochgelly when he scored what proved to be the winner. Fast forward to 2011 and some things had changed. A coloured band was attached to my wrist in exchange for my ticket, and there was bright sunshine – so much so that it was a struggle to see at times. However, further similarities to an all-inclusive holiday at an exclusive Caribbean resort were limited, although the pie was tasty and the coffee hot, which is more than you can say for some grounds. Nevertheless, Central Park retains a welcome link to the game’s prehistory and of course, the stock-car race track is legendary. 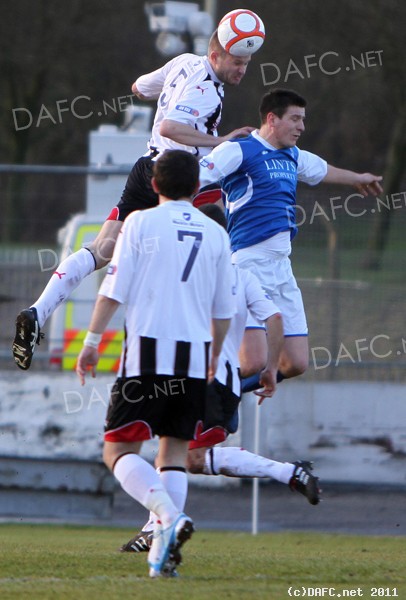 Jim MacIntyre had virtually a full squad to chose from, so back came Chris Smith from suspension to reclaim the goalkeeping jersey, and the previously cup-tied Liam Buchanan formed a striking duo with Andy Kirk. Nick Phinn might have been a slightly surprising choice to partner Gary Mason in the middle, but the rest of the team virtually selected themselves. After his promising debut Rutkiewicz linked again with Keddie in central defence, Woods and McCann were the full backs, and with Joe Cardle wide left, David Graham started on his allegedly less favoured right wing. Kyle Allison and Alex Burke dropped to the bench alongside new signing Martin Hardie, Neil McGregor and Steven McDougall. The youngsters Willis and Thomson could count themselves a tad unlucky to join Paterson and Bell in one of the main stands.

As for the Blue Brazil – they had added the experience of Stevie Crawford and Lee Makel since the sides had last met; would the curse of the former player returning to haunt his former team-mates favour the former Pars players, or would Liam Buchanan score his first Pars goal?

Cowden kicked off playing into the sun, but the early stages favoured the visitors. Buchanan showed his good first touch in the second minute and played a1-2 with Kirk before releasing Cardle, but his cross eluded Kirk. Phinn was next to threaten, but couldn’t find the target with a left foot effort.

In 11 minutes we saw the first of the home team as an attacking force – Robertson was getting well forward from the right-back slot, and after Keddie had fouled him Makel stuck in a dangerous free-kick which Rutkiewicz had to head behind. Smith gathered the corner and his quick throw allowed Graham to run the length of the park, but his centre was again just ahead of Kirk. 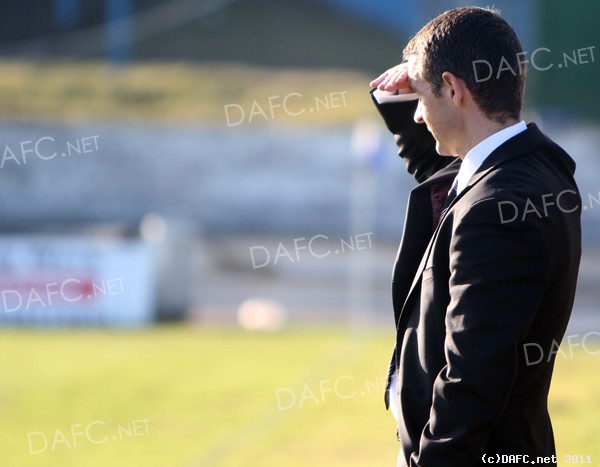 The Pars were on top, and Cowden’s struggles were exemplified when given a shy in 14 minutes – the ball boy had to chase the ball half-way up the race-track, only for Winter to miscue the ball straight back off the pitch, prompting further scurrying from the young lad. Meanwhile on the pitch, the Pars came close when Woods was nearly caught in possession by Campbell, only for a deft turn to give him some space to deliver a super ball inside the left back for Phinn who reached the byeline, but Kirk’s shot from the cut-back was blocked at close range.

Makel at least forced a save, although Smith wasn’t unduly tested by the midfielder’s 18th minute attempt but the traffic was mainly in the other direction. Buchanan and Kirk were beginning to time their runs better, Buchanan in fact managing to latch onto a through ball, but although he took the ball beyond keeper Hay he was too wide to do any damage. Graham came close half-way through the half with a drive just over the bar, and Cardle did the hard work to create a shooting chance on the half hour, but his shot was just past Hay’s right hand post. A late Buchanan effort just before the break took a slight deflection allowing Hay to save to his left, but half-time came without the Pars cashing in on their undoubted superiority.