The new look Pars played with width and pace and eased to victory over their lower division rivals with goals from David Graham and doubles from Kirk and Bell. It’s difficult to gauge how good a performance this was, but it was certainly entertaining and encouraging.

It was just over 2 years since Pars had played their only previous match at the Strathclyde Homes Stadium - a pre-season friendly. On that occasion Gerry McCabe(!)’s team had given the Pars a fright before Scott Thomson took the game by the scruff of the neck, the Pars running out easy winners with goals from Nipper, Stevie Crawford (2), Owen Morrison and Jim Hamilton. How times change, with Stephen Glass the only starter from the 17 Pars who featured that day. 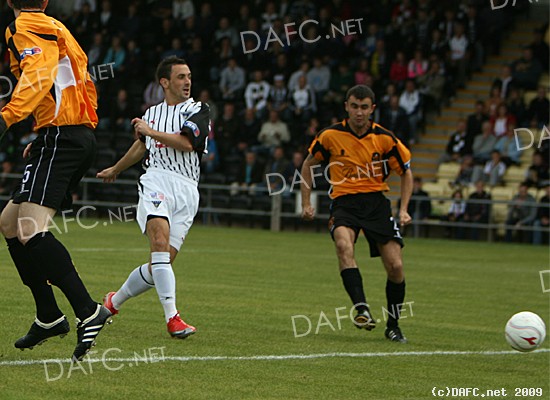 The visitors made one change from last week - after his superb performance as a trialist against Coventry, new signing Neil McGregor came into the heart of defence replacing Austin McCann who dropped to the bench. So the Pars lined up with Fleming in goals, Ross at right back, MeGregor right centre-back, Higgins left centre back and Stephen Glass, wearing the captain’s armband at left back. Bell and Burke were in the middle of the park, with David Graham wide on the left and Willie Gibson wide on the right. Kirk and Bayne led the line.

The Pars started brightly, Graham pouncing on a loose ball to feed Kirk, who won a first minute corner. Nothing came of that but the Pars took the lead with 2 minutes on the watch. Graham twisted and turned in the middle of the park before switching it wide to Gibson. Gibson played a 1-2 with Bayne who was fouled as he gave the return, referee Boyle waved play-on and Gibson sent a low cross into the 6-yard box which was met by the onrushing Graham who swept the ball home. 1-0 Pars.


Just the start the Pars wanted to dispel any early nerves, and although McGregor had a shaky moment in 7 minutes, he recovered well, and 2 minutes later the Pars doubled their lead. Again Graham was involved, going past Chisholm as if he weren’t there before chipping to the back post with the outside of his red right boot - Bayne nodded back across goal and Kirk tapped home from a couple of yards. 2-0 Pars


Stevie Murray was featuring on the right for the Sons (at least to begin with) and although he appears to have put on a bit of beef since his days at Killie and Partick, he still has the ability to cause disquiet in the Pars rearguard - his 14th minute cross field ball taking a deflection to set up Carcary, but Fleming made a fine save at his feet.

Kirk and Gibson both tested the Sons defence before McGregor was next to come to the Pars’ rescue after McLaughlin left Higgins for dead at the bye line - clearing the resultant corner as well, but the Pars were soon back on the offensive. 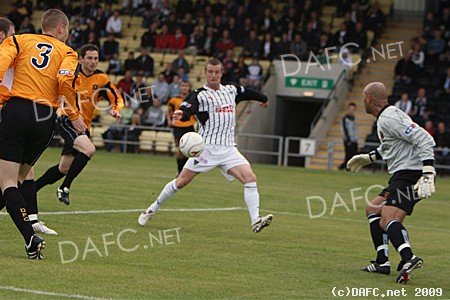 Another cross, another goal! Pars go 2-0 through Kirk

Chisholm was a little unfortunate to get a yellow card with a slightly mistimed challenge on Graham who was causing all sorts of problems, but the crime count was evened up when McGregor headed McLaughlin rather than the ball in an aerial challenge. The Pars were well on top now, and Graham should have done better than blast past after Kirk had elected to pass on the half hour, as should Bayne with a tame effort 4 minutes later. Graham at least forced McEwan into a fine save in 39 minutes before the Pars scored again in injury time, and again Graham was involved. Bell did well to get his head on a clearance, knocking the ball to Kirk, who showed fine control to feed Graham on the left. David cut inside, fed Burke, who let fly with his right foot from 25 yards. It took a touch off Bell and flew into the net - both players celebrated, and both were congratulated - the announcer gave it to Burke (whose mock celebration failed to convince Bell that he was the rightful scorer). No matter