QUICK-FIRE DOUBLE SINKS INJURY-HIT PARS. Two goals in six second half minutes separated the Pars from their high-flying visitors as individual errors, top class counter-attacking and a lack of a killer touch yet again left Dunfermline without a home win this season.

Despite playing well for large spells and reducing the Steelmen to a direct style of football more akin to Raith than Motherwell, the Athletic yet again left the pitch knowing another team has keft East End with all three points.

Despite Jim McIntyre`s belief that last week`s performance at McDiarmid Park was one of the worst of his tenure, there was only one change from the defeat in Perth. Fit-again Jordan McMillan came into the side at right-back with Andy Dowie shuffling into the central area beside Alex Keddie. Austin McCann started at left-back with Patrick Boyle moving onto the bench. The rest of the team was identical to the starting XI against St Johnstone, with David Graham, Gary Mason, Ryan Thomson and Joe Cardle filling the midfield berth and Martin Hardie supporting Liam Buchanan in attack. On the bench, Steven McDougall joined Boyle, Kerr Young, Ryan Goodfellow, Shaun Byrne and Paul Willis as possible replacements.

The biggest plus for many fans was seeing Andy Barrowman also joining the subs bench, the big striker having missed the last six games. Motherwell also made one change, Keith Lasley being replaced by Omar Daley. When you consider Stuart McCall has only had to use 17 players in his starting line-ups this season, it puts Jim McIntyre`s injury list (also 17 players* at the last count, with Paul Burns and Andy Kirk the latest to join the inactive list) into some perspective. 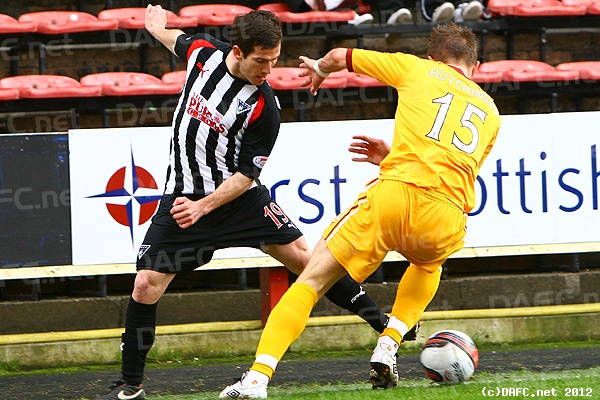 With both fans in decent voice, the game began with the Pars shooting towards the visiting support in the Cowdenbeath end. The match didn`t take too long to settle, and it was the home side who were making the early play. Buchannan and Thomson combined well and after Cardle had had a touch, the former Partick man drove towards goal. His shot was tame though, and Randolph held on comfortably. The Pars had some defending to do as the pacey Motherwell counter attacking style created an opening for Daley but his touch was poor and the covering Mason got back. With no target man up front, it was left to Hardie to win headers up front and to be fair to the Big Mad Mental one, he was having some success. On one occasion the ball broke on the right and the Pars forced a corner. The ball in wasn`t good though, not the first time this would be the case today.

With the game looking like it was heading towards a midfield battle, Martin Hardie almost shocked the Motherwell goalie with a dipping volley from the edge of the box. Randolph did well to cover the ground and save though, and with no Pars player taking a chance on the rebound, the ball was easily cleared. Henrik Ojamaa was having a quiet game, but he managed to have a snatch shot as the visitors broke up the park. Luckily for the Athletic fans in the Norrie, the ball flew up towards them rather than into the net. In truth both sides wingers were having off-days, with Cardle misplacing a few passes on the few occasions the Pars midfielders were making forward runs, Graham taking one touch too many at the edge of the box and Ojamaa and Daley seeing little of the ball as Motherwell resorted to long punts up towards Michael Higdon.

This tactic seemed all the stranger given that the big striker barely won a header in the first half, despite trying to foul his marker each time he challenged for the ball. The one shot Higdon did get away was tame and Smith gathered, but his only other contribution in an even first half was to lead with his elbows in another attempt to flick on a high ball. Referee Brian Winter had seen enough and gave the former St Mirren man a yellow card.

At the other end, Liam Buchanan`s tenacity was causing the Mothewell defence all sorts of problems. He managed to win a series of corners for the Pars, but the crosses were poor and on each occasion the chance was gone.

There was no surprise then to see Paul Willis going for an extended warm up as the first half drew to a close. Before the break though Motherwell went in search of the opening goal. A foul on Buchannan was missed, and the ball was filtered across to Daley on the right. His ball was blocked for a corner by Keddie, with the set piece coming to nothing as both teams went in at the break tied. 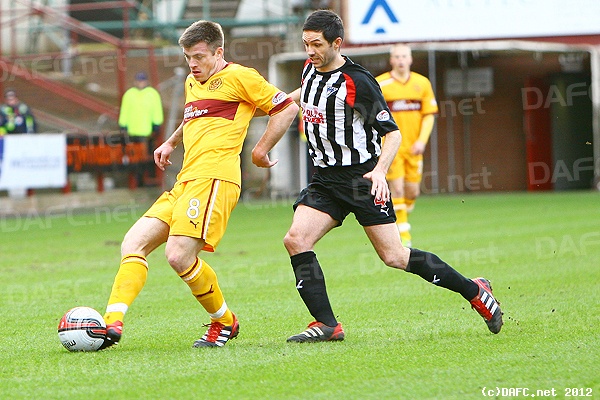 Both teams made changes at the start of the second half and it was no shock to see wingers in both sides being replaced. Paul Willis came on for a largely ineffectual Cardle and Omar Daley was replaced by the man who did so much damage on his last appearance at East End Park, Chris Humphreys. It was the home side who seemed to adapt to the changes more easily, as a rushed clearance in the Motherwell back line fell to Graham. The chance was lost though, as the final ball never quite came despite several Pars players being in attendance.

This left Dunfermline short at the back and a quick break set Murphy away. It was great to see so many Pars players busting a gut to get back and in the end four Pars players made it back to the penalty area and it was captain McCann who smuggled the ball clear with a few Motherwell fans asking, somewhat incredulously, for a penalty.