With this fixture originally scheduled for the day after Christmas, perhaps it was fitting that the two sides who love to hate each other finally met the day after Valentine`s. In the end it was the Pars who got out of jail, Andy Kirk`s late leveller saving the home side like a petrol garage bunch of roses on the way home from work.

With financial constraints on both clubs, it was perhaps a surprise to find both teams arriving with strong squads. Jim McIntyre was only missing long-term injury victim Stephen Bell, while Stephen Pressley arrived without the suspended Marc Millar. His visiting Bairns didn`t include former Par Tam McManus (or his magic hat) though, despite him recently returning to fitness after a lengthy lay-off.

Ironically enough it was a former Falkirk winger who gave this game the added edge with a late winner against Raith Rovers on Saturday. With both these sides winning at the weekend, the Pars knew top spot was up for grabs and Falkirk`s fans started believing that they could turn the Irn Bru First Division Championship into a three horse race. 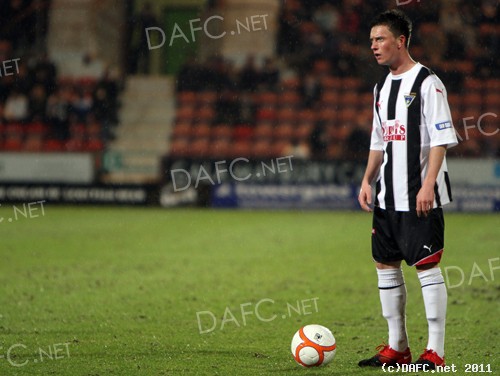 Cardle lines up a free kick

With the floodlights on full power and the rain turning to sleet overhead, the game kicked off with both sets of fans in fine voice. Falkirk, roared on by a vocal visiting support, made the early running and forced an early corner. The Bairns` tactic of bunching the players outside the far post came to nothing however, and another tactical innovation from “Elvis” was quickly shelved. Compton was enjoying this opening period, and after more good build up play his shot was blocked on the slide by Austin McCann. More danger was to come for the Pars when a corner was only half-cleared. The resulting cross was volleyed spectacularly off Chris Smith`s left hand upright by Scobbie. Worryingly for the home side, the corner was conceded after more indecision at the back after Rutkiewicz had to slide a ball into touch with Smith both silent and static on his goal-line.


The Pars had started slowly and without cohesion but at least moved into the Falkirk half when they broke from a defensive position. The attack came to nothing however, with Joe Cardle penalised for a handball. After ten minutes or so the game was settling down, only for a bizarre incident involving Olejnik, Compton and Higginbotham threat ened to bog the game down again. With Compton injured and heading for an early shower, the goalkeeper Olejnik took an age to take the free-kick given for the handball. With the Pars asking the referee to re-start the game with the visitors down to 10 men, the goalie was booked for time-wasting. Strangely though, the referee then allowed Falkirk to make their substitution. The sub was to have a major impact on the game, despite the inauspicious start to his involvement.

After the commotion had died down, Falkirk settled into a rhythm and Flynn was next to try his luck with a low shot that was well held by Smith on the greasy surface. The Pars were also starting to get more into the game, and a Cardle corner was headed wide by Liam Buchanan with others waiting to pounce on any rebound from post or bar. With the game now a battle in the sleet, chances were few and far between. Falkirk did look the likeliest though, and after a shot by Duffie that went well over the bar, the Pars again found themselves in trouble. This time a scramble in the box looked set to be stabbed home but for the intervention on Calum Woods. The Liverpudlian then had the visiting fans on their feet (and their manager on the pitch) after Smith caught his passback. Despite their protests though, referee Law had spotted that Woods had played the ball back using his thigh. 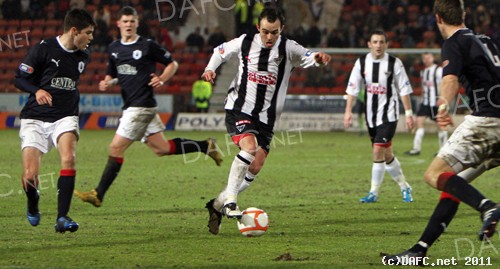 Dunfermline looked to impose themselves more on the game as the first half passed the midway point, but a Woods cross-shot that Olejnik held at his near post was all they could muster. Their cause wasn`t helped by some strange refereeing decisions; Nick Phinn in particular was upset when Law blew for a foul by him when he was being nudged by not one but two Falkirk defenders. Phinn was warned but escaped a yellow card for his dissent. As the tempo increased, both sides had half chances. Firstly Flynn crossed into a dangerous area only for Keddie to clear. A minute later, Duffie was caught sleeping after Buchanan won a header and Cardle moved in on goal. Sadly for the home fans, his cut back was into a good area but there were no takers in black and white. Falkirk also had more chances as the game moved towards half time.

A neat lay-off by Finnigan fed Murdoch but his shot was blocked. Stewart then had a wild shot over and wide when clean through, before the best move by the home side created a chance for Kirk. He ran onto a through ball and moved in on goal, but with Cardle free on the left, the Ulsterman shot tamely into Olejnik`s chest. This spurred the Pars on and they caused more panic at the back with a series of half-blocked shots in the box. Eventually Olejnik tried to take charge of the situation but dropped the ball. Sadly there were no Pars takers this time.

As the half moved to an end, Falkirk tried to grab a lead to take into the break. Duffie managed to cut the ball back into a dangerous area, but the ball was scrambled clear. When the ball returned to the danger area, Flynn chipped an inviting ball across the goal-line but Finnigan`s stretch wasn`t quite enough and the ball was smuggled away from danger. Again the ball was returned with interest and only a McCann block stopped Stewart from getting a clean shot away. With the referee checking his watch the Pars managed to force a corner after Woods had bulldozered his way into the box, but Cardle`s cross came to nothing.

With the sleet showing no signs of letting up, both teams returned to the pitch looking to take the initiative. It was the home side who threatened first, with new Par Buchanan almost scoring on his home début. Sadly for the former Cowdenbeath and Partick man, his lob over Olejnik only managed to nestle on the roof of the net. Kirk was next to try his luck, with a shot from the edge of the box. Although the shot was on, Davie Graham was in a good position on the right and a ball into the channel may have seen greater rewards. Falkirk weren`t too slow in getting back up to speed either though, and with a Pars attack breaking down, Flynn led a counter attack although his shot was tame and drifted wide.


The Bairns were enjoying a good spell and forced several corners, which the Pars couldn`t quite escape fully from. Higginbotham was seeing a lot of the ball and his crossing was causing problems at the back. After a scramble, another ball was fizzed in low, but again Smith had his angles right and gathered despite the slick surface. The Pars did break out though, and Kirk again tried his luck. The ball was blocked and during the resulting scramble, some Pars players and several thousand Pars fans demanded a penalty for handball. In truth it would have been a soft award, and the pleas fell on deaf ears.