The Pars should have won a point in this match but ended up with a 1-2 defeat and Andy Tod sent off.

The serious stuff started today with Hearts narrowly edging a 2-1 victory that they barely deserved. In fact, if the Pars were not having to play against 12 men with a totally incompetent referee Brian Winter losing the plot, the Pars would have got something out of this game. Much has been said about the large foreign contingent at Hearts which sadly seems to mean they are even more adept at falling over and conning the officials


The Pars continued with the 3 5 2 line up from midweek against WBA with Roddy McKenzie in goals. A back three of Scott Wilson, skipper Greg Shields and Souleymane Bamba now signed on a two year contract. Calum Woods was at right wing back, McGuire, Simmons and Mason in the middle with Muirhead on the left. Freddie Dacquin partnered another new signing, Noel Whelan. 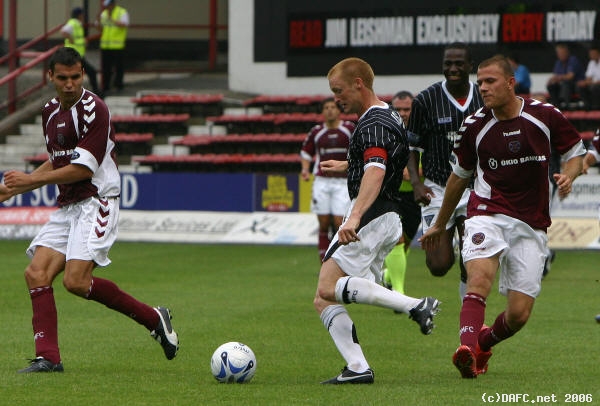 Shields marshalling the defence and getting Hearts rattled. 29th July 2006

It was completely ironic that Whelan should only last 5 minutes before having to go off injured. Why was he playing in the first place if it was acknowledged he was 4 weeks short of match fitness? Surely it would have been a better option to play a younger fitter player alongside Dacquin? Freddie had actually started the game well and looks very quick and clearly troubled the Hearts defence. He worked very hard alongside substitute Andy Tod who set about the Hearts defence with gusto.

Brellier blasted high over the bar in 7 minutes which was the first tentative attack by Hearts. Referee Winter slipped up big style in 10 minutes when he failed to see a blatant handball in the Hearts penalty area which didn’t bring any credit to his lineman either. It was probably Pressley because it seems there is a special rule in the SPL that “Elvis” can use his arms in any way he can without being penalised.

It was a complete pain in the tonsils that Hearts took the lead, against the run of play, after McKenzie had a rush of blood to his head to come out for a ball on the right of his area then change his mind while Hearts were able to pass it past him and Bednar stuck it over the line in 15 minutes. McKenzie did not have a lot to do during the whole game but did make a couple of saves but he will have nightmares about his indecision leading to the goal.

Defensively the Pars were looking quite strong with Scott Wilson and Greg Shields outstanding. Also settling into the side was Bamba who still had an odd erratic moment but there are signs he will prove to be a useful signing if he stops causing problems for his own team-mates. Aguiar was rightly booked for a foul on Muirhead in 32 minutes then as if to redress the balance 30 seconds later he booked Tod for a challenge on the Hearts keeper. How Tod was supposed to stop himself in mid air when he was rightly challenging for the ball only Mr Winter can explain. Stephen Simmons had the ball in the net in 34 minutes but had been flagged offside or at least Mr Pressley stuck his arm in the air and the linesman obliged. McKenzie made a couple of average saves from average shots in 36 and 40 minutes. Bednar was booked for a ridiculously late challenge on Shields in the left back position. Half time 0-1.

The Pars had got into gear quickly winning two corners as the second half got underway. The Pars did get a break in 52 minutes when Hearts hit the post with the ball bouncing wide and was cleared.

Bamba was even more prominent in the second half and made a fabulous tackle deep in the 18 yard area cleaning whipping the ball away from Bednar (who, of course, collapsed in a heap).

It is strange how often a player comes back to haunt a former club and again today Stephen Simmons came close to equalising in 60 minutes as Gordon struggled to tip around the top corner a touch on by Simmons. Then a couple of minutes later Simmons was on hand to bundle the ball over the line for an equaliser in 62 minutes. A deserved equaliser at that.

Tod had a looping header that flashed over the bar. Muirhead was booked for a silly foul on the Pars left hand side of the 18 yard box but McCann’s free kick flew well over. McCann was replaced by Berra in 70 minutes.