The Pars got very little Christmas cheer with another home loss, this time to relegation rivals Motherwell. The transfer window cannot open quickly enough for Stephen Kenny to improve this squad.

The Pars plunged themselves deep into the relegation mire after good performance in the first half degenerated into an ill-disciplined farce in the second against the Steelmen. This was supposedly a “must win” match for the Pars and they failed miserably. Chances missed and two very sloppy goals given away makes it look as if the Pars are heading for the 1st Division unless Stephen Kenny can prove that he does indeed "walk on water".

With Stevie Crawford missing due to suspension the Pars line up had to be changed with Dacquin and Burchill back in the side. The team lined up with De Vries in goal, Shields, Wilson, McGuire and Young the back four. Freddie Dacquin was wide on the right and Mason and Bamba the central midfielders with Muirhead on the left. Jim Hamilton and Burchill led the attack. 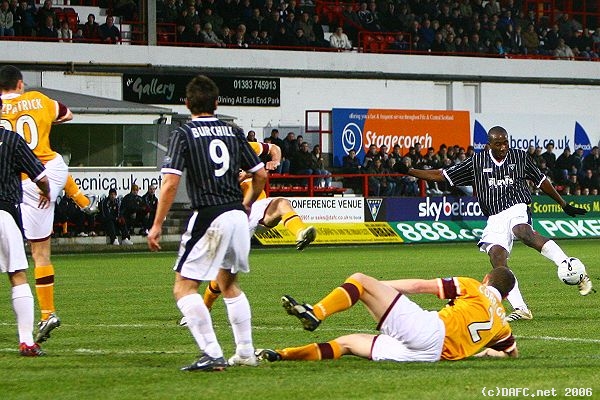 Souleymane Bamba has an effort on goal.

The Pars started positively with Bamba showing up well in midfield giving a much need physical presence but he managed to hit tamely over from 18 yards in the first minute. A couple of minutes later a good cross by Muirhead found Dacquin but his shot was saved for a corner kick. Shields made a good run forward in 6 minutes linking well with Dacquin and his cross was met by Muirhead but he was offside.

Phil McGuire made an outstanding tackle deep in the Pars penalty box in 12 minutes to take the ball from McDonald although Kerr hit wide from the loose ball. Straight up to the other end and Burchill picked up a ball on the edge of the ‘Well area and with plenty of time he managed to hit the bar. The Pars were building up momentum and won two corners in quick succession with Wilson coming close with a header cleared off the line. Bamba then hit a shot over from the second corner. 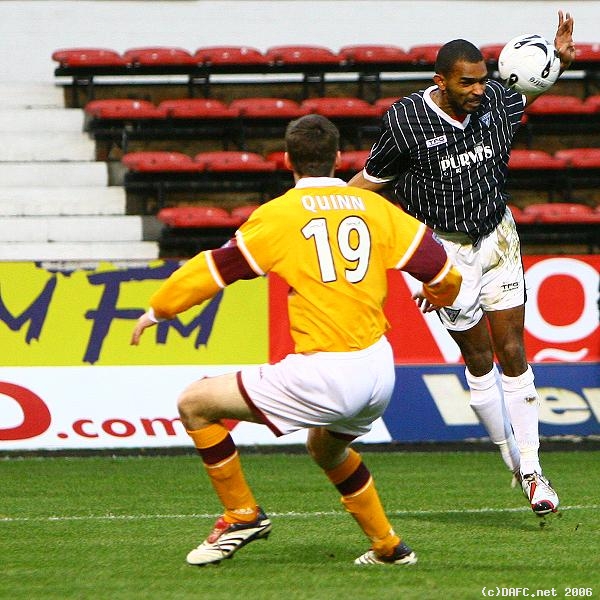 Young was playing well in the left back role and made a good break in 20 minutes finding Muirhead who hit a low cross which the keeper held. Elliot came close for Motherwell in 23 minutes with a shot hit over the bar. A minute later Young hit a shot wide which he really did not get hold of. Burchill picked up a yellow card after shouting for a penalty for handball waved away by referee Richie. Then disaster for the Pars as Motherwell took the lead. The ball found its way to the Motherwell left with a two on one situation (Dacquin not Shields), Fitzpatrick easily shot past De Vries. The goal was totally against the run of play and continued the terrible run of losing the first goal in the match. Bamba shot wide in 28 minutes as the Pars tried to get back on level terms. 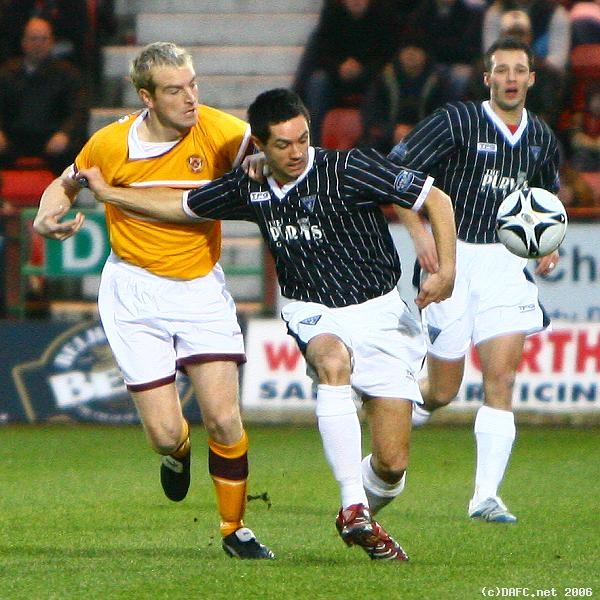 Elliot had a great chance to increase the visitors lead in 29 minutes as he was through but De Vries made a great stop. The Pars then had their best move of the game as Bamba was set up for a shot that he put in the side net. Burchill then had another good effort this time it landed on top of the net instead of in the net in 35 minutes. Another good move saw Bamba put Shields through but his cut back from the bye line had no takers. The Pars had to make a late change as Morrison came on for Dacquin who appeared to hurt his thigh. That was to prove a big loss in the momentum the Pars had built up in this game. Half time 0-1. 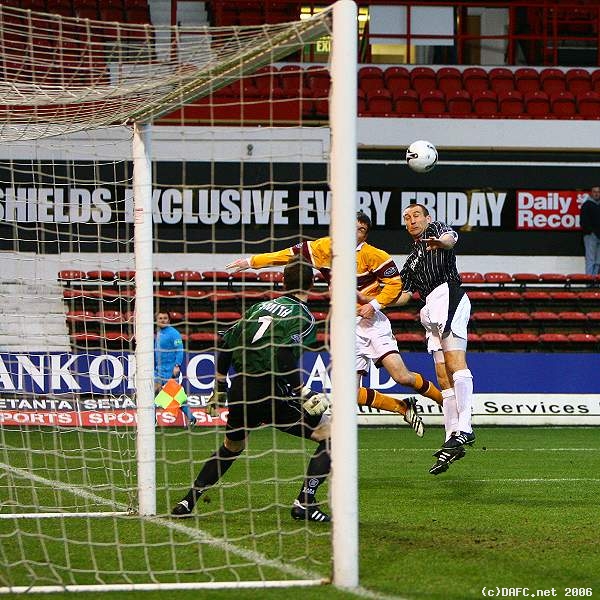 Burchill was set up brilliantly by a Bamba through ball in 47 minutes but the striker slid the ball across the goal when it seemed certain he would score. Jim Hamilton was playing well and was very close with a header from a Young cross in 51 minutes. Darren Young shot wide himself a minute later. Bamba then hit a good cross from the right which resulted in another Pars corner.

Motherwell were hardly seen as an attacking force but managed to win a corner in 58 minutes as Muirhead made a crucial lunge to deflect a shot wide. ‘Well made a change in 29 minutes with Smith coming off to be replaced by McGarry. A Pars free kick in 63 minutes saw a Mason cross fall to Muirhead who seemed to have the whole goal to aim at but he sliced wide with his weaker left foot. Greg Ross replaced Bamba in 68 minutes. 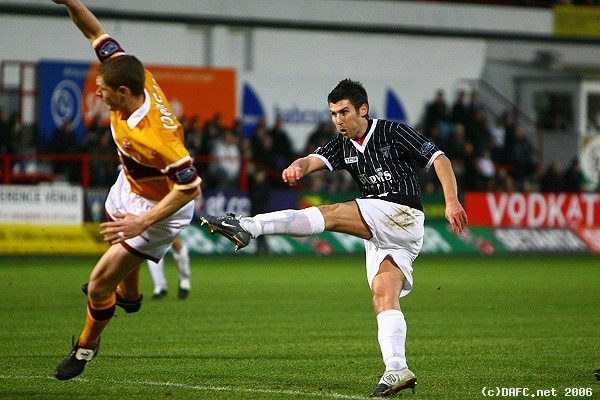 Scott Wilson picked up a senseless yellow card in 75 minutes for what looked like a piece of retribution for an earlier foul by the Motherwell player. A stupid reaction from the experienced defender. A minute later Muirhead also got a yellow for mouthing at the referee.

Motherwell scored the decisive second goal in 78 minutes as McDonald cut in from the left leaving two defenders in his wake and he drove the ball past De Vries. It was game over. It then got worse as Hamilton was rightly red carded for elbowing a Motherwell defender. The Pars players obviously felt aggrieved that Foran had picked up only a yellow card earlier for a similar action against the Pars but Hamilton was completely irresponsible for putting the referee in that position.

De Vries made another good save from McDonald as the Pars had totally lost their way by this time. Despite Hamilton being off they still insisted on playing the long ball forward which was pointless. There was disappointing lack of urgency from the Pars as the game drifted away from them and with other results going against them this turned out to be a major set back to avoid relegation and a tremendously generous Christmas gift to their relegation rivals. Final score 0-2.