Another home game, another defeat, with the promise of Tuesday’s performance soon evaporating in blustery conditions. Again the Pars started well, again they trailed to a sucker punch although this time, having thought they had equalised, they fell out of the game and finished poorly.

With the squad pretty much down to the bare bones, Kirk having joined the injury list (and the absent Harper assumed never really to have been off it), Jim McIntyre named the same starting eleven as that which took the field at Livi, in the same formation: Gallacher in goals, a back four of Thomson, Shields, Wilson and McCann, a midfield 5 of Bell on the right, Phinn, Glass in a holding role, Burke and Graham, and Mole ploughing his lone furrow up front (but hoping Graham could get forward often to support). On the bench there were recalls for Ross and Willis, who joined Loy, Muirhead and Reidford.

This formation, albeit with different personnel, had achieved a result at Firhill and a performance at Almondvale so there was some justification for the eternal optimism one has at kick-off as the Pars took the centre defending the Norrie McCathie end. In a promising start, the Pars took the game to Thistle, and in 4 minutes had a good chance to open the scoring. McCann on the left fed Burke who in turn found Graham, who turned his man to set up a shooting chance. Tuffey could only parry the ball, and Mole seemingly surprised to get the opportunity, didn’t get his follow up shot away properly. 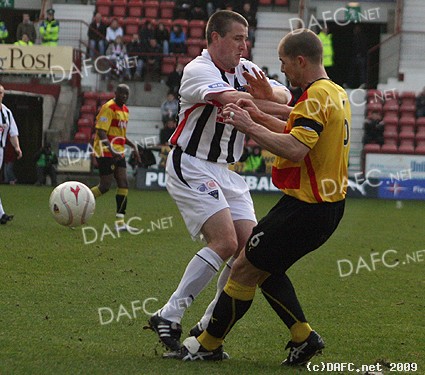 Mole got a better connection in 12 minutes, volleying into the side netting from wide in the box after a Shields free-kick into the area had been headed skywards, and Graham dragged a shot past the other post on the quarter hour from Phinn’s lay-back, Glass having picked out his diagonal run despite slipping.

The Pars continued to dominate possession, when, just like on Tuesday night, they conceded a goal to the opposition’s first meaningful forward foray. Wilson had ventured forward in 19 minutes to help the attack, but lost possession. Thistle broke and found Paton on their right; Burke seemed to have averted the danger in the left-back area, but the ball was swung over to the edge of the box where Harkins was downed by Wilson - as clear a penalty as you will you see. Harkins took the spot-kick himself, and although Gallacher guessed right, the Jag’s finish was exemplary. 1-0 Thistle.

Scott Wilson gives away the penalty

Dunfermline are used to having to come from behind this season, especially at home, and to begin with seem unperturbed, continuing to pass and create half-chances. Glass had a pop from distance in 21 minutes, which wasn’t close, Burke likewise two minutes later, when he had more time and space to do better, but the closest came in 24 minutes. Mole got to the bye-line on the right, sent over a deep cross which Burke played back to Graham. The midfielder’s cross was half blocked, but deflected onto the bar with Tuffey beaten. 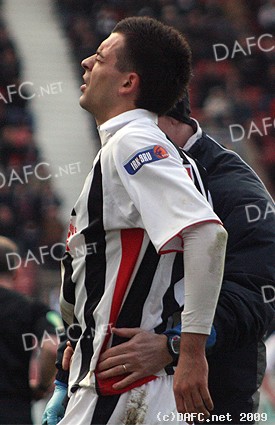 Bell picks up an injury

Gallacher had to block with his chest at the edge of the box as Doolan was nearly through, and Harkins had an effort wide just after half an hour, before Bell limped off to be replaced by Loy. The Pars had lost momentum, and although a they put together another promising multi-player move on half-time Paton’s tackle on Phinn brought that to a halt and the Pars left the field to some muted booing.

The second half was only 30 seconds old when Paton had space to shoot, but his effort was high and wide, and 4 minutes later Twaddle was allowed to run virtually unchallenged down the wing and along the bye-line, but the threat was dealt with eventually.

Thomson had the Pars first effort of the half when he cut inside in 58 minutes and hit a firm left foot effort which Tuffey dealt with at his near post and when Glass burst forward 2 minutes later McKeown had to block Loy’s shot from close range. Meantime Muirhead had replaced Burke as the Pars had switched to a 4-4-2, with Loy moving up front and Graham to the right.