Raith Rovers come away with all 3 points in a pulsating Fife derby. Trailing to a fine Murray strike Willie Gibson is controversially sent off before a second half breakaway clinches the win. Try as they might the Pars can’t find a way past McGurn.


So much for my suggestion that Rovers would make more changes than the Pars - one change (in personnel at least) was made by each manager following the mid-week match - Dowie in for Higgins and loan signing Casalinuovo in for Weir. The Pars went with a 4-4-2 - Fleming in goals, Woods, McGregor Dowie and McCann along the back, Bell and Phinn in the middle, Cardle and Gibson on the wings (see later) and Bayne and Kirk up front. Rovers adopted a 4-1-4-1 with Murray in the holding role and Tade in a more withdrawn position. Glass featured on the bench for the Pars - but Davidson failed to recover from his head-knock for Rovers.

Cardle started on the right and Gibson on the left as McIntyre tried to second-guess his opposite number, and the Pars nearly got off to a fantastic start in the 5th minute. Burke tidied up in his own box, and facing his own goal picked out Woods with a pass across his own penalty area. The full back fed Bell who made a powerful run through the centre before finding Cardle on the right. Joe’s centre was swept in the net by Kirk. A brilliant move, but Kirk had strayed off-side by a whisker.


Rovers had their first effort in the eleventh minute when McGregor half tackled Casalinuovo as he chased Smith’s through ball and although the debutant was first to the loose ball his chip landed on the roof of the net. At the other end Bayne got on the end of Woods’ free-kick but a back-pedalling McGurn tipped the ball over the bar, Dowie blasting over from the corner.

Often when the same two sides face each other twice in a week, the second game is much closer as each team’s threats are nullified. This was proving to be the case as there was little to choose between the two Fife rivals mid-way through the first half, and Cardle and Gibson reverted to their usual stations. Rovers were certainly fired up and Murray was booked for going through the back of Bayne in 24 minutes.


Bell couldn’t direct a 28th minute header on target after another neat passage of play with the ball being switched from wing to wing culminated in McCann crossing first time from Burke’s incisive pass, but this burst of fluency was something of a rarity. The foul count was again running high and referee Somers seemed to lose patience when Bayne was yellowed for his first foul. However the game was turned on its head in a dramatic two minutes just before the break. In the 42nd minute Woods and Burke both went for the same ball, and the clearance fell to Grant Murray 25 yards out, whose first time half-volley flew into the net to Fleming’s left. Murray had only scored 5 league goals in over 300 appearances, but this was an absolute peach. 1-0 Rovers. 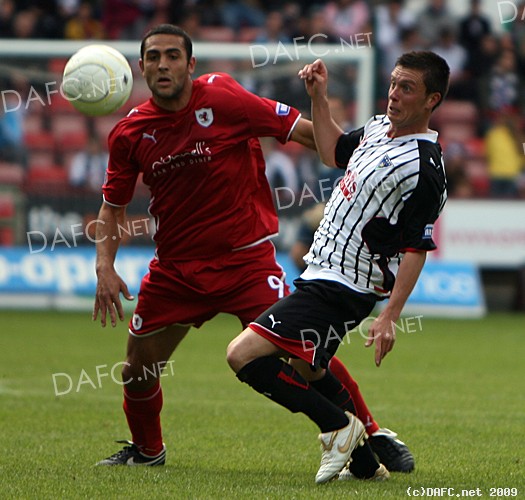 Joe Cardle fighting for the ball

Then things went from bad to worse. Smith and Gibson clashed near the dug-out, the Pars winger brushing away his opponent with his arm. A little bit of pushing and shoving ensued and Somers waded in to book both miscreants. However, the linesman flagged, and the referee showed a red to Gibson instead. Mayhem - with Bell showing a rare burst of pace to intercept Gibson before he could put his differing point of view more forcibly. No further cards in this incident (although if Mr Somers was of a mind to punish dissent his pen would have run out of ink) but McGregor saw yellow in injury time for a cynical foul.

From the way the Pars lined up it the game plan was clear - 4-3-2, sacrificing width by moving Cardle inside, but keeping 2 up front. However, corners were defended with 10 men back as was evidenced when McGregor had to tackle Casalinuovo in 53 minutes, shortly after the Argentinian had become the sixth player in the book after bumping into the Pars number 5.

Tempers were getting frayed and Burke was lectured after throwing a strop when Bayne was fouled for the nth time, Kirk smashing the free kick miles over the bar. Then on the hour mark, another critical moment. Cardle won a corner, took the kick himself and Bayne’s header seemed net-bound but for a wonderful save from McGurn. With the Pars committed to attack, Rovers broke down the left, Smith put in the cross and Casalinuovo slammed home. 2-0 Rovers, when it had looked like being 1 each.