It wasn’t quite the homecoming we expected. A slightly subdued atmosphere and performance saw the Pars struggle against St Mirren, but rally sufficiently to secure their first point of the campaign, although the Buddies missed a first half penalty that would have given them a deserved lead.


It was all a little surreal to begin with – football had returned after the briefest of absences, but on a Monday night, still in July, and we had a Pars team in yellow and blue against a visiting side in red and black. Despite some half-hearted celebrations involving the raising of the First Division Championship flag the occasion never quite ignited.

There was an interesting contrast in team selection: a severely revamped side on the one hand, and a manager largely keeping faith with those who had won promotion on the other. Macca largely kept faith with his first division heroes, with only three of his summer signings getting a starting berth. As fate would have it two of them were former players Gallacher and Potter who would make their second debut against the side from which they had signed, with Jason Thomson being the 3rd debutant replacing the departed Calum Woods at right back. Alex Keddie started at left centre-back and of course captain McCann was the left back. Hardie and Mason were in the centre and Cardle and Graham started on the wings. There was a slight surprise (if squad numbers are anything to go by) when McDougall was favoured over Andy Barrowman to partner Kirk in attack.

SPL rules mean that up to 7 potential replacements can be named. Ryan Thomson and Paul Willis were 2 obvious choices to satisfy the requirement of having 3 under 21 players in the squad, with the relatively unknown Kerr Young being the third. More likely candidates to get a game at some stage were Dowie and Burns and the complement was completed by Barrowman and keeper Smith.

Danny Lennon had made wholesale changes and included both Steven Thomson and Steven Thompson (the former Dundee Utd, Rangers, Cardiff City and erstwhile Scotland striker) in what was a fluid (and more normal for the division) 4-3-3/4-5-1, with Gary Teale and Nigel Hasselbaink supporting the front man.


Losing the toss further added to the surreality as the Pars were forced to kick towards the Norrie McCathie stand in the first half. It only took a few seconds for the Pars to get a taste of life in the top flight as Jason Thomson’s forward ball was easily blocked and Potter had to be on his toes to make a saving tackle in front of the Saints’ fans in the North East stand.

However the Pars did create an early chance, quickly squandered, when Graham ran on to a Hardie head-flick but sliced his shot wild and wide from the angle. Alarm and encouragement in equal measure then but it was soon the former that predominated. Gallacher was nearly embarrassed by a McGowan cross-shot, making a belated yet wise choice to help the ball round the post, and shortly after the keeper was well out of his goal shepherding the ball out for a shy.


The Pars keeper was in more conventional action in 8 minutes when the visitors fashioned a good chance for McGowan but Gallacher blocked well at the expense of a corner.

Kirk and Cardle had hardly touched the ball and with St Mirren outnumbering the Pars in the middle of the park, that wasn’t to change soon, although Cardle did get the chance to bring the ball down and cross in `18 minutes but Samson gathered comfortably. The Buddies continued to look the more likely, with Hasselbaink coming close to scoring at the midpoint of the half following an exchange with the left back Tesselaar but his side –footed effort was just off target. 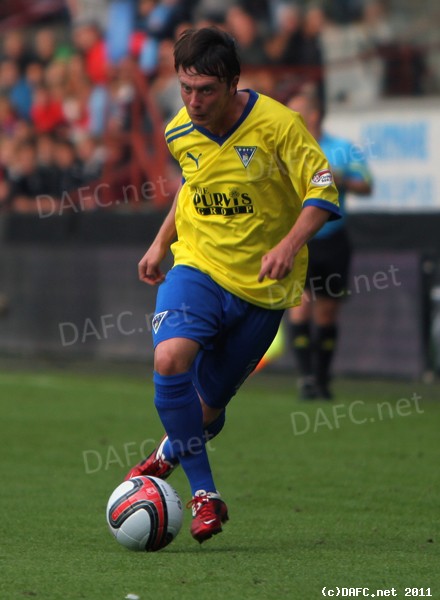 An indication of the poverty of the Pars’ play was that they only looked remotely threatening from set pieces. In 36 minutes Cardle fired in a free-kick from the left that skimmed off Goodwin’s head for their first corner, and 3 minutes later Kirk won a free-kick in Martin Hardie territory. Once the wall was back the whole ten yairds Hardie bent the ball round and over and it took a decent one handed save from Samson to keep his goal intact. However, the Saints hit back, breaking from the corner with Hasselbaink evading two Mason challenges (for which Gary was booked) before Graham, tracking back, gave away a debatable foul 30 yards out. Also debatable was the award of a subsequent penalty when Potter got himself in a tangle with Thompson trying to defend the free-kick. A yellow for Potter and a gilt-edged chance for Thompson to open his account, but his effort from the spot was at a nice height for Gallacher who dived to his left to save.

No scoring at the break, although had the Pars trailed by a couple there could have been few complaints.

Despite being distinctly second best in the first period, the Pars made no changes in personnel for the resumption and did not get off to a good start. Hardie was slack with a pass and ceded possession but Thompson over-elaborated, then Keddie gave away a free-kick which Gallacher only half cleared but Teale lobbed wide. Hasselbaink continued to torment the Pars defence, first catching McCann in possession only to be virtually rugby tackled, then robbing Jason Thomson to allow Steven Thomson this time to draw another save from Gallacher. McCann twice put the ball into the car-park as the Pars continued their rearguard action, before a couple of substitutions made a bit of difference.