The Pars lost the Scottish Cup final with a late freaky goal that was hard to take after an outstanding display where they had matched SPL champions Celtic in every department.

With the enforced changes in the team there was much speculation about how Stephen Kenny`s team would line up. The back four was where thesurpises started with Scott Morrison brought back at left back with Scott Muirhead stepping forward into midfield. The remaining players in the back four were as expected in front of Dorus De Vries with Shields, Wilson and Bamba.

The midfield was the crucial area with Muirhead joined by Darren Young, Adam Hammill and Jamie McCunnie. Jim McIntyre and Mark Burchill were the attacking duo. Surprisingly, there was no place for Phil McGuire. 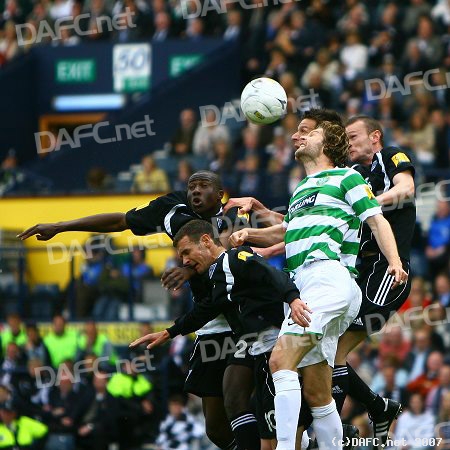 The Pars support was tremendous and clearly up for the game despite being outnmbered 2 to 1 by the quiet Celtic support. After their respective huddles it was game on as the Pars attacked the end with their fans behind the goal.

Adam Hammill got some early touches and looked as if he was going to be on form although was a bit over enthusiastic with a challenge on Naylor. The Oars had an early chance as McIntyre set up Bruchill who pulled his shot wide when he should have hit the target but it was very encouraging for the Pars support.

In 9 minutes there was a half hearted shout for a penalty as Burchill appeared to be tumbled in the area. That was almost repeated in 15 minutes and it seemed a more certain penalty but again Kenny Clark waved play on.

Bamba was playing well with some great headers and interceptions and in 17 minutes he was moving back towards the right touchline when he was barged by Hesselink. The game was surprisingly end to end with the Pars playing well.

Celtic had th eball in th enet in 21 minutes but De Vries was pushed by Hartley with the whistle going well before the ball was in the net. A Scott Morrison free kick in 26 minutes was just over the bar. There was then the bizarre sight of Bamba on the left wing attacking Celtic but his shot come cross was poor.

Hesselink had a great chance to score in 32 minutes when a cross by Miller was headed wide by the Dutch striker.


The Pars were passing the ball well with McCunnie and Young in the centre of midfield doing a great holding role. Mark Burchill got a yellow card for a foul on Doumbe who also got a card for his reaction.

There was no doubt the Celtic defence looked uncertain with McIntyre winning a lot of the balls in the air and Pressley and McManus made to look very ordinary. Half time 0-0.

The Pars again started well wining a couple of quick corners. A chance for Kenny Miller instead saw a good save by De Vries in 50 minutes as the keeper stopped a header which was directed straight at him. The Pars were not getting the ball to Hammill as much as they did in the first half. Pressley is booke dfor a foul on Hammill which could have been a red card in an SPL match. 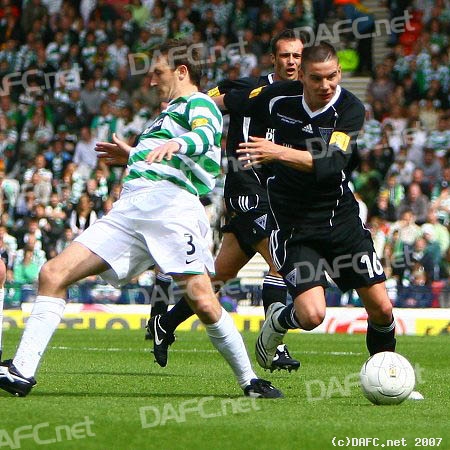 Although ths was the much vaunted Neil Lennon final he was subbed in 62 minutes having had a fairly inept game. But that change possibly started a period of the game where Celtic seemed to get their act in gear as the Pars were pushed back.

There was a bizarre moment in 72 minutes as Burchill robs Boruc of the ball after the keeper made a mess of a Pressley pass back but the keeper managed to scramble the ball back. Stevie Crawford replaced Morrison and Muirhead dropped back to left back. McIntyre had a half chance with a header into the side net from a Crawford cross in 75 minutes.