It was with no false modesty that Hamilton Accies turned up in their away kit, in the colours of the great South American world cup winners. By the end of this match the Accies had completely outplayed Dunfermline with the home side choosing today to give their worst performance, not only of this season but many seasons.

Make no mistake, Hamilton deserved to win and the only surprise was that they did not score at least another 3 or 4 goals.

Continuing with the side that won two weeks ago at Dumfries there was the news that Jim McIntyre was again missing this time due to illness. Gallacher was in goals with Woods, Bamba, Wilson and Muirhead the back four. McMnaus was on the right of midfield with Crawford and Phinn in the centre and Glass on the left. Burchill partnered Hamilton in attack. 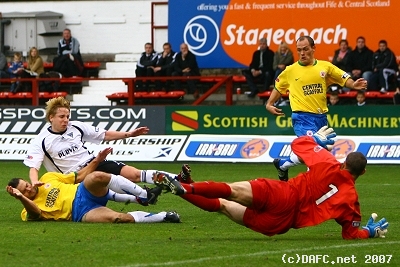 The game got off to the worst possible start for the Pars in 4 minutes as Bamba tries to walk a ball out of defence about 20 yard from half way and is dispossessed with McArthur easily scoring past Gallacher.

This gives Hamilton a real lift and in 8 minutes lack of communication among the Pars defenders saw Glass clear a ball for a corner when he had time to turn and clear. The first real effort at goals for the Pars came from a free kick which McManus blasted over in 13 minutes.

Bamba was at his defensive best in 14 minutes when slid in to put a ball out for a corner after Gilhaney left Woods for dead. Yet the afternoon was to go from bad to worse for the big centre back. 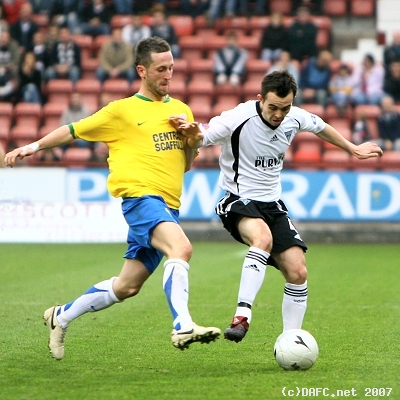 Gallacher had to look lively and dived bravely at the feet of the very lively McArthur in 17 minutes. But it was only a minute later when Gallacher was again picking the ball out of the net. Again, a Bamba mistake as he tried to head back to Gallacher but was well short with McCarthy nipping in to slot past the keeper with the rest of the defence posted missing. There was almost a sense of "game over" even at that stage of the match. Hamilton were a joy to watch. Quick passing and movement with good strength that the Pars midfield in particular simply could not cope with and in their centre forward, Richard Offiong, both Bamba and Wilson struggled.

Glass tried to slip a ball through to Burchill but he could not stop it going out for a bye kick. Bamba came close to setting up a third goal for Hamilton in 30 minutes when a few seconds later Offiong took a ball down and blasted a tremendous shot that dipped over Gallacher for the visitors third. The goal was rightly applauded by the home support as well as the tiny band of Accies fans looking lost in the huge East stand. 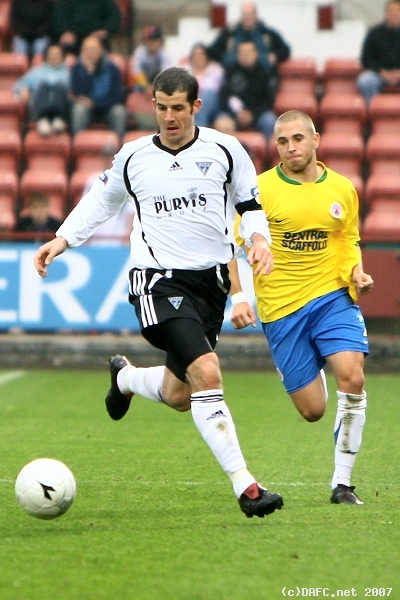 It looked as if things were going to get even worse for the Pars just before halftime when Wilson fouled Offiong and, as last man, he should have been sent off but survived with a yellow. Clearly, referee Conroy could see the Pars were being hopelessly outplayed by Accies even with 11 men on the park. Half time 0-3.

Surely, the Pars would come out with all guns blazing in the second half? Answer, no. As Winters lobbed a ball past Gallcher almost right from the re-start after yet another error by Bamba who played the ball off the Accies player.

Gallacher made a great save from Offiong in 47 minutes after Muirhead decided to try a "Bamba" and lost possession to Winters. The Accies looked as if they would score everytime they attacked and indeed they did in 53 minutes this time with the visitors creating the chance themselves with no helping hand from the Pars defence(other that they Pars players stood back and admired) Winters slotting past Gallacher from an Offiong pass.0-5. The home fans were understandably leaving by the hundreds at that point. This was quite simply embarrassing for the home side. 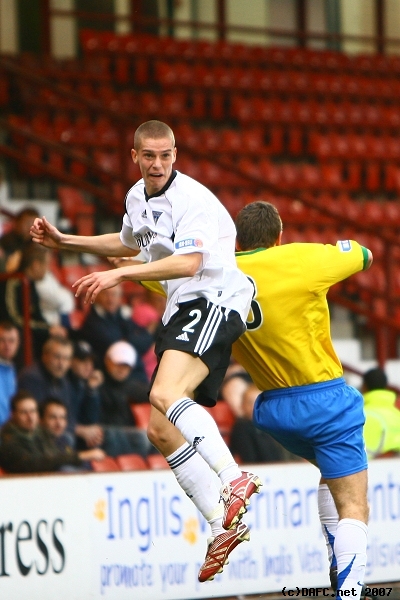 McManus had a great chance to score a consolation goal in 60 minutes but a great last ditch tackle by McCarthy blocked the shot and it also typified the spirit of the Accies team.

Offiong was replaced by Swailes in 62 minutes as the centre forward got a resounding round of applause from the few remaining home fans who appreciate a fine performance when they saw one and were no doubt a little glad to see the back of the Accies main tormentor.