It was Saturday afternoon, it was 3 o’clock and it was East End Park. Unfortunately, despite it being seven weeks since the last such conjunction of normal footballing parameters, the match was anything other than a crackerjack with 2 defensive mistakes gifting Hearts the win in a drab encounter. On the positive side, the Pars were much more competitive, without ever looking particularly threatening.


As ever, the first game after the international break threw up some more selection problems, although of the unavoidable kind – Barrowman’s operation (for details– see Appendix) and Jason Thomson’s loan conditions rendered both players unavailable. However, with 20 squad players on the pitch before kick-off we had plenty of opportunity to indulge in the sort of head-scratching over possible formations not seen since the Calderwood era. The 20 were soon down to 18 when Alex Keddie disappeared up the tunnel after (for reasons not immediately obvious) performing some press-ups in the middle of the pitch, followed shortly after by Shaun Byrne

Even when the line-up was announced things weren’t immediately obvious, other than that Gallacher would play in goals. However, it soon became clear that Macca was going with 3 centre-backs – McCann on the left, Potter in the middle and Dowie and the right, and two wing-backs. The inclusion of Paddy Boyle on the left would be welcomed by many who viewed the Maryhill Maldini as the answer to our defensive woes; meanwhile Paul Burns filled the right wing back role, the presence of two players with the initials “PB” causing havoc for anyone trying to take brief notes of the action, alas. The midfield 4 consisted of Mason, Graham, Ryan Thomson and Joe Cardle, the last named looking like the obvious candidate to support the lone striker Kirk, in what could be a 5-4-1 (if not a 3-6-1 on occasion).


We also had a surprise on the bench, with a rare sighting of Pat Clarke disproving the notion that Steven Bell on crutches was more likely to be selected. Pat seems unfortunate in that whereas he may not have Kirk’s eye for goals, Barrowman’s strength, Buchanan’s touch or McDougall’s trickery, he can still do a decent job as back-up. However, on the bench he was, alongside the returning McDougall, Easton, Buchanan, Willis, Smith and Young.

By contrast, Hearts went with a highly traditional 4-1-4-1, Eggert Jonsson sitting in front of the back 4, and Skacel and Templeman coming in from the right and left respectively to assist Ryan Stevenson in leading the line.

The teams were out a little early so referee O’Reilly delayed until the top of the hour before allowing the Pars to start play towards the Cowdenbeath end, but the early stages were not worth waiting for


Cardle drove in a second minute free-kick that just eluded the Pars offence, and a couple of minutes later his reverse pass allowed us our first glimpse of Boyle but he put his cross behind. Another reverse pass, on the right this time was intended for Thomson, but he had mistimed his run and was flagged offside.

Gallacher had been relatively unoccupied, but made a good take under pressure from Grainger’s inswinger corner in the 14th but his intention to start a quick break by launching the ball to Mason was foxed by the fact that Gary had had to leave the pitch for treatment, and wasn’t allowed back on.


Kello was similarly untested but the Pars had a chance in 16 minutes when Cardle’s poor touch tempted Black into a rash challenge (suffering an injury in the process) 30 yards from goal. Kirk’s free-kick was more like a rugby conversion than a serious attempt at goal.

The Pars won another free-kick which was about to be delayed to allow Black’s substitution but with
Taouil not being ready Mr O’Reilly, never the most patient of referees, insisted play proceed, with the Pars winning their first corner which Cardle contrived to overhit.

The substitute Taouil introduced some liveliness and just after the half hour mark he got the break of the ball to set up Templeton, with Mason diverting his centre goalwards but the ball was cleared before Gallacher needed to save. 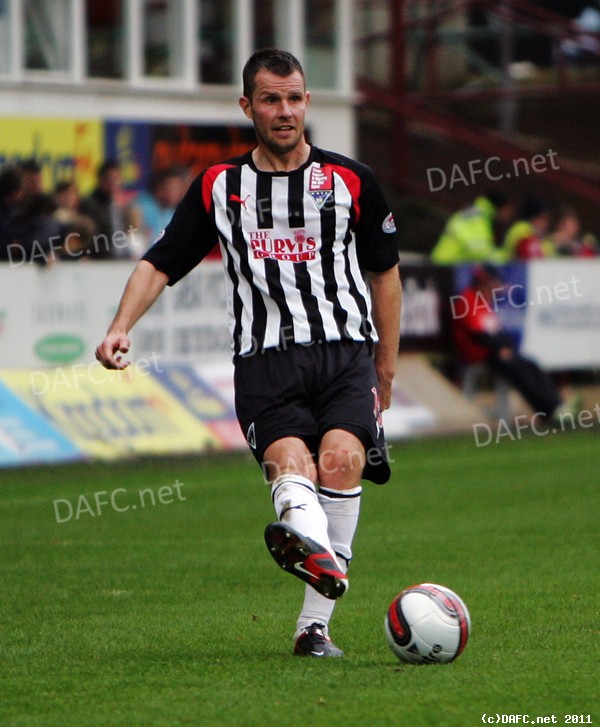 This was a rare break from dullness, though. Both teams were trying to pass their way up the park, but once the play got into the final third, the pass was poor, or predictable, or both. A Graham back-heel in 37 minutes was a rare flash of ingenuity but Burns’ centre was cut out at the expense of a fruitless corner.

The game needed a goal, but it came at the wrong end. Dowie had generally looked untroubled, but his clearing header in 40 minutes was too central and fell to Skacel 25 yards from goal. His shot was heading just inside the post only for Gallacher to make a fine save to his left. However Kirk’s miscued his attempted clearance of Grainger’s near-post corner and Webster was quickest to react to head home from 6 yards. 1-0 Hearts.

The goal couldn’t really be justified on the balance of play, and things got a little worse for the Pars when a Burns/Graham combination up the Pars right was defended and Burns, haring back to defend, dived in to take Taouil down for the game’s first yellow card.

The second half was also a little late in starting after a lengthy interval, and took even longer to generate anything of note. You can tell when you notice that 10 minutes have elapsed before you are moved to make any jotting s in your note-book that the game has taken on all the qualities of a turgid midfield battle. However, the tempo began to increase, Stevenson sprung the offside trap then went down easily under a challenge from Potter that gave rise to a freekick that was drilled off-target, before the same player produced a comfortable save from Gallacher with a 58th minute header.