The so-called curse of the Manager of the Month award was exorcised with a competent but never entirely convincing win, which makes up for coming home empty-handed when these clubs met in the first game of the season.

A week’s break for international duty gave the Pars a chance to add to their injury worries with Scotts Wilson and Thomson being missing. After his performance at Clyde, Woods as expected featured alongside Shields in the heart of defence and Greg Ross made a welcome return to first team action in the right back slot. The rest of the eleven was on usual lines - Gallacher in goals, McCann at left back, the midfield quartet of Harper right and Burke left bracketing Phinn and captain Glass, and Kirk and Bayne up front. No sign of Bell, injured playing for the reserves midweek, but Dearden provided defensive if inexperienced back-up on the bench alongside Wiles, Williamson, Campbell and Reidford. 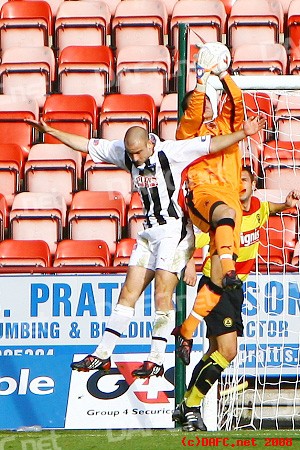 With both sides sporting their first choice kits, the visitors took the kick off shooting towards the Norrie McCathie end and also looked to be along normal lines, adopting a 3-5 -2 formation.

Glass showed his intention to be at the centre of all set pieces swinging a first minute free kick into the box but it was easily dealt with.

With the Pars back four never having played together before there was bound to be a few shaky moments; Shields welcoming Ross back to business with a tricky pass in the 3rd minute then misjudging a long ball over his head, but McKinlay couldn’t keep the ball in play.

In between a promising move involving Kirk and Harper came to naught as Burke unaccountably dummied the ball with no teammate behind. 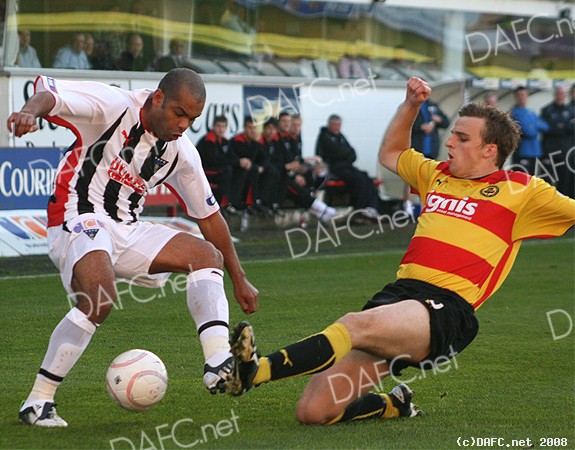 Harper was also aware of his defensive duties, but when he attempted to volley clear in 11minutes he didn’t get any distance and as the ball was fed back to Twaddle Thistle had their first chance but the wing-back skied his hurried shot high and wide.

Although the Pars were trying to build from the back with Gallacher feeding McCann quickly whenever the opportunity arose, most of their threatening moments were coming from Harper and Ross combining on the right, with Phinn looking to get forward and have a shot. 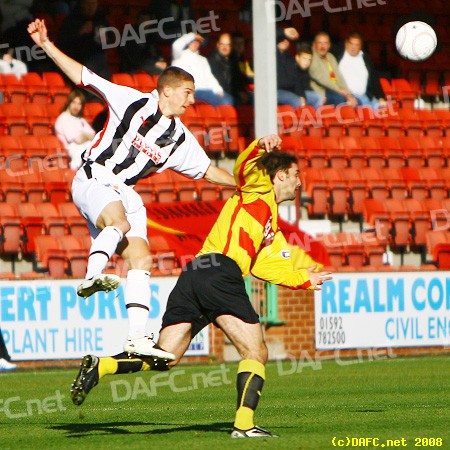 After a good first quarter the Pars faded a bit and it was Partick’s turn for slight ascendancy: Maxwell was looking to generate some goalmouth pressure with long throws into the box, and Harkins created a good chance for himself in 26 minutes but Woods blocked his shot.

However, the Pars took the lead in 36 minutes with a well worked goal - Harper was found on the right midway in the opposition half; he made some space as he waited for Ross to get on the overlap, before finding the full back with a perfectly weighted pass. Ross drove on before feeding Phinn; Nick reached the bye line and cut back for Kirk to bundle home at the near post. One nil Pars.

Boosted by this the Pars finished on top; Harper set up Bayne for an ambitious (and inaccurate) shot from 25 yards before having a go himself, cutting inside and sending a left-footed shot that seemed destined for the top left hand corner before Johnny Tuffey pulled off a fine save. 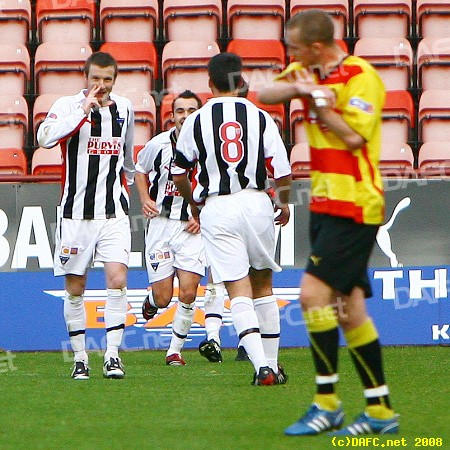 No changes at half-time, and the Pars were first to show in 47 minutes when Kirk flicked a Burke pass onto the onrushing Harper but his first time outside of the foot shot went just past Tuffey’s right hand post.

Tuffey had to tip over Glass’s cross in 49 minutes and two minutes later Gallacher also had cause to be worried when Paton’s cross deceived everyone before slipping past the back post.

In 53 minutes Ross and Shields lost possession whilst trying to set up an attack but Woods was able to clear up behind them. Time for changes with Diego McCall throwing on Liam Buchanan for Chaplain, switching Donnelly to mid-field as Thistle looked for the equaliser.