It took Graham Bayne all of two minutes to make an impact - his goal cancelling out Harkins’ earlier header. The Pars played well in the first half without creating too many chances, and fought back well after going behind.


No Bayne in the starting line up, with Graham playing through the middle instead; Gibson got the gig on the right wing and Burke retained his position in the middle, and got the captain’s armband to boot. Thus the Pars started this key match against the table toppers with Fleming in goals, Ross, McGregor, Dowie and Woods in defence, Burke and Bell in the middle, Gibson right, Cardle left and Kirk and Graham as the front pairing. No sign yet of Stephen Glass on the bench, nor of Chris Higgins or Steven McDougall - instead we had Bayne, Phinn, keeper Paterson and a return for Holmes and McCann.

Jocky Scott also started with a 4-4-2, with the front pairing of Griffiths and Higgins likely to catch the eye, along with the hard working Kerr in centre midfield and Harkins on the right.

The Pars started brightly, and for the first 20 minutes were much the better team. A couple of early corners gave the home fans hope of a better performance than lately; from the second, the ball was returned via Burke to Gibson, whose effort from 20 yards scraped the paintwork the wrong side of the far post. A minute later Gibson put the ball one side of Malone, ran round the other to collect but his attempt to cross was as bad as his previous play had been good.


The Pars were getting more joy down the right than the left, with Gibson linking well with Ross, the latter cutting inside in 13 minutes to let fly from 20 yards but his fierce shot was headed behind for the Pars third corner of the game. The corner count rose to four three minutes later but it should really have been the goals column that was getting the tally-mark - Cardle at the back post appeared to have a laid it on a plate for Kirk but somehow Lauchlan deflected his close-range shot over. Gibson was taking corners from both wings, and sent this one very deep, the ball wasn’t cleared and eventually Bell crossed for Graham but his header drifted wide.


Mid-way through the half Bell got a sore one making possibly his first tackle of the game and required lengthy treatment - don’t let that put you off tackling in future, Steven - and with Harkins switching sides for a spell, the visitors began to threaten. Ross mistimed his tackle on the former Partick man, who sent in a dangerous free-kick from close by the dug-out which eluded almost everyone, before Dowie stuck it behind for a corner. The corner was eventually cleared after a bit of a scramble and there was another heart-in-mouth moment in 32 minutes with a MacKenzie’s knockdown bouncing just in front of Griffiths. Sparky wasn’t quite sparking on all cylinders, although Dowie was again to the rescue to clear from virtually on his own goal line after Sean Higgins’s speed had forced Fleming to screw his clearance straight to a Dundee player. 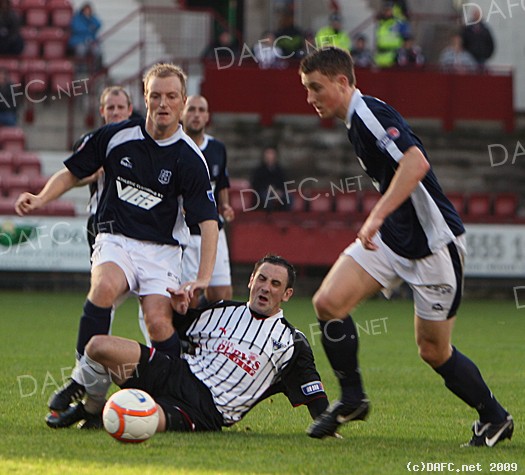 Kirk and Graham weren’t really hitting it off, although the former superbly brought the ball under control in 40 minutes but his next touch was too firm to set up the latter, and Cardle suddenly came to life just before the break but Bell failed to read the reverse ball as Cardle glided across the edge of the Dees’ box.

Lots of pretty football, but no real end product - still, a big improvement from last week.

There was slight consternation at the start of the second half. With the ball already spotted for the kick-off, it was clear that the Pars only had 10 players, missing Woods who had picked up a thigh strain in the closing seconds of the first period. However, McCann, possibly waiting for a studs inspection that never came, soon had his track-suit top off and was safely in position at left back in time. A couple of minutes later the trouble was on the other side - Dundee did well to work the ball to Forsyth who was totally free on the left and as the Pars struggled to deal with his centre it took a superb save from Fleming to deny Griffiths.