The Pars made it hard work to edge past Ayr in this game and reach the Challenge Cup final after a superb strike by Stephen Glass in the closing minutes of this match.

The Pars were either starting to take his competition seriously or were looking to get some continuity in terms of team selection as a strongish line up started the game. No Stevie Crawford, Darren Young or Calum Woods and Burchill and Hamilton were on the bench.

Gallacher was in goals with Thomson at right back, Bamba and Wilson in the centre and Glass at left back. Williamson was on the right, Phinn and Simmons in centre midfield with Morrison on the left. McIntyre, at last, started his first game of the season alongside McManus. 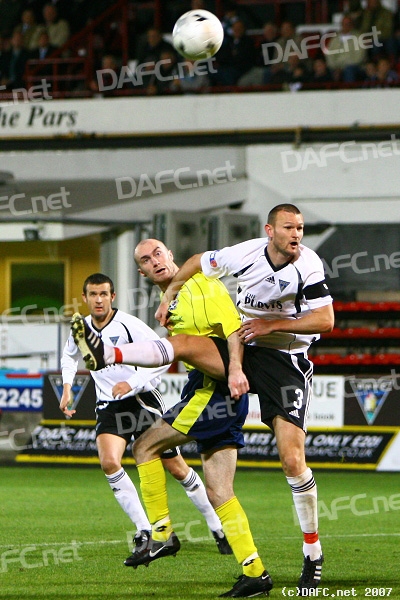 Nicky Phinn was looking very busy in the opening minutes looking for and getting the ball. He had the first shot for the Pars in 3 minutes that was easily saved by Corr. A floated lob forward was mis-judged by Corr as he pushed the ball out for a corner when it was going out for a goal kick. 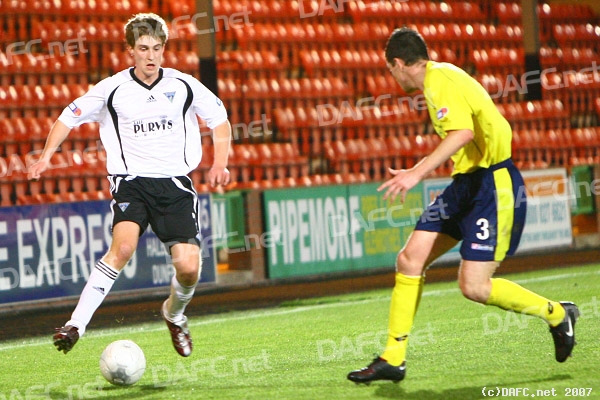 Ayr had a bit of an attacking flurry in 24 minutes as Wardlaw looked menacing with a header wide then Bamba and Wilson having to make successive tackles to stop Ayr making the breakthrough. Simmons hit another good shot over in 38 minutes. There was a close thing for Ayr in their own goalmouth as a ball spun over the keeper to be headed clear from under their own bar. McIntyre headed a cross straight at the keeper in 43 minutes. Half time 0-0.

Nipper does not come back out and Scott McBride starts with Iain Williamson dropping back to right back. McManus hit a low shot just past the post. A close chance for Ayr in 50 minutes as a corner is hooked back in the area with an overhead kick with the ball being headed wide by Henderson.

Robertson breaks forward and the Pars defence backs off allowing him to shoot with Gallacher taking two efforts to hold. McManus had a great chance in 60 minutes with his shot parried back to him by the keeper but his second shot going wide as he fell back. Scott McBride cut in from the left and hit a powerful shot high over from a tight angle.

Burchill replaced a tiring McIntyre in 61 minutes. Burchill set up McManus for a shot in 65 minutes but it was wide. A brilliant first touch by Morrison saw him pull down a high ball and cut into the area to shoot but his effort was blocked.