After what was by all accounts a good midweek performance at Tannadice, the Pars were looking to continue their good results when hosting the Division’s form team. Few who saw the teams back in August would have predicted then that the visitors would come to East End Park looking to go top of the division, but that is just what can happen in a tight league

Everything seemed set fair for the Pars as they took the field in their favoured black and white stripes, defending their favoured end for the first half and playing what looks to be Jim McIntyre’s favoured starting eleven - with Wilson and Shields both fit to start, they continued as the central defensive pairing, flanked by Woods and McCann. In front of them we saw Harper, Phinn, Glass and Burke, and further forward Kirk and Bayne. Gallacher was of course in goals. Even the bench had a settled look about it - Nipper Thomson for defensive cover, Bell for midfield, Wiles for wide, Williamson for up front and Reidford for goals. All according to plan.

However the plan didn’t last long. After winning a couple of early free kicks in the opposition half, the second of which actually set up a Saints break after a poor delivery by Glass, Wilson getting back to cover, the Pars conceded a free kick of their own in the 4th minute in a dangerous position. Glass appeared to win the ball, but referee Murray took exception to a perceived stamp. From 20 yards Martin Hardie curled in a free kick right footed over the wall to beat Gallacher to his right. A good execution, but it looked all a bit too easy for the mid-fielder. 1-0 Saints.

With players from both sides slipping periodically, Glass hit an effort just past in 10 minutes but it was the visitors who could have doubled their lead when Hardie latched on to a Holmes flick but sliced his effort wide from 12 yards.


However, mid-way through the half the Pars got back on level terms - Kirk managed to meet a Harper cross but diverted his header away from goal, surprising Craig who turned the ball behind for what was to be the only corner of the first half. Glass took the kick, inswinging the ball left-footed to Wilson at the back post whose firm header hit the roof of the net. One all.

Again St Johnstone nearly scored in 26 minutes when Sheerin outjumped Woods to meet a seemingly aimless lump to the edge of the area, and Milne nipped in but flicked the ball over Gallacher.


Moon appeared to suffer a bad injury just before the half-hour mark, going down after what seemed an innocuous challenge from Glass. The Pars man received a yellow card for his opponent’s pains although it seemed that this was based more on the seriousness of the injury rather than the tackle itself.

What little joy the Pars were getting was coming from the right, with Harper skipping past challenges and sending in early crosses - this nearly proved effective in 34 minutes when both Kirk and Phinn nearly got on the end of one such effort. Nearly, but not quite. 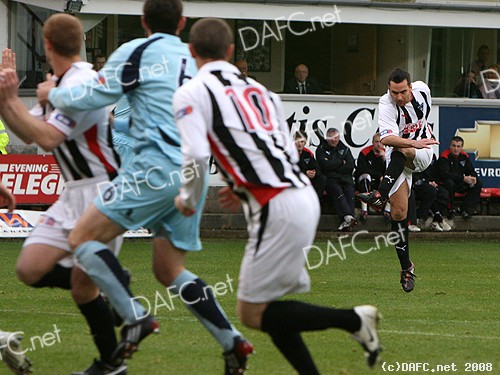 Shields made a bad error in 37 minutes, when having plenty of time to clear, miscontrolled, and let in the substitute Swankie. Perhaps he hadn’t quite adjusted to the pace of the game having only been on the field 4 minutes, but he shot straight at the keeper from 12 yards. A good save from Gall, but he shouldn’t have been given the chance.

Woods was always looking to get forward and with 3 minutes of regulation time left in the half he made a typically breenging run before attempting to set Phinn free, but Main was alert and quick off his line to smother.

Despite there being 5 minutes of injury time there was no further excitement. 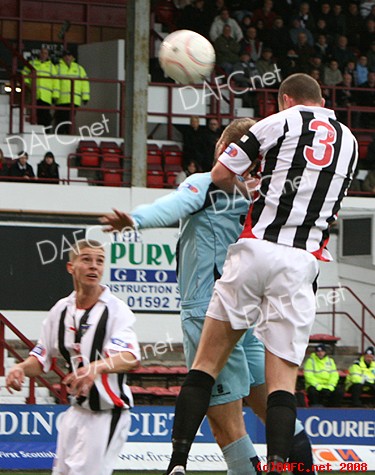 The Pars were late out after the break, perhaps taking on board some last minute advice, and certainly started brightly. After Main demonstrated he had lost none of his handling ability over the years when claiming Kirk’s early cross, Wilson’s hoof over the top set up Harper for a run on goal, but from a narrow angle he pulled his shot past the far post. Possibly squaring was a better option, but Harper has a good record of finishing given the chance.