Brilliant. Marvellous. Magnificent. Are there any other adjectives you could use to describe Martin Hardie? Rarely can a 35-year-old have been catapulted towards canonisation in a few short weeks but by scoring two second-half goals, one a regulation back post header, the second a tremendous free-kick curved over the defensive wall, BMMMH further endeared himself to the faithful as the Pars took an enormous stride towards promotion.


An end-of-season sequence of games is often described as so many cup finals. Certainly the fitful night’s sleep and the nauseous feeling in the pit of my stomach were testament to the fact that this was the biggest game of the season so far, and quite possibly the biggest Fife derby since the league cup final of 1949. The streets around the ground were already busy a full hour to kick off and there was barely a seat to be had as East End Park was rocking. 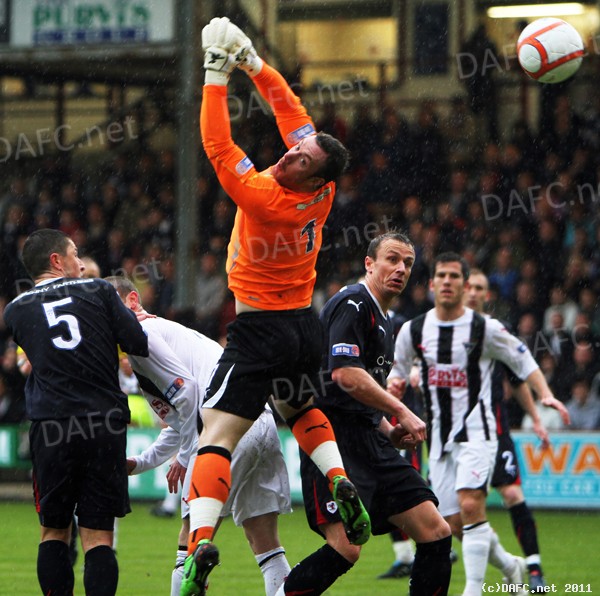 Andy McNeil lets a ball slip through his grasp

The suspended Kevin Rutkiewicz put in a pre-match appearance on the pitch along with Neil McGregor and Pat Clarke indicating that the latter two hadn’t made the squad. Instead, Graham Bayne was a surprise call up to the bench, along with the returning Phinn and Dowie. Calum Woods regained his right back slot, and Higgins started as left centre-back alongside Keddie; Cap’n McCann and Smith completed the defence. Mason and Hardie were first choice in midfield, Graham and Cardle started on the wings and Buchanan and Kirk were the strike-force.

The Rovers also went with a 4-4-2, with Stephen Simmons a surprising choice at left midfield with John McGlynn reluctant to drop either Iain Davidson or Kevin McBride. Mark Campbell was paired alongside Grant Murray in central defence and Gregory Tadé and John Baird would continue their excellent striking partnership.

It was a day for strong nerves and big hearts, and with the rain tipping down, we were away and on time.

Rovers took the kick-off defending the Cowdenbeath end and showed their early intentions by immediately launching a high ball looking for Tadé coming in off the right-touchline, but McCann was there first to win the header and set the tone for the afternoon. An early Woods foul allowed Walker to swing over a cross but Keddie was able to shepherd both the ball out and Campbell over the advertising hoarding.

However, after another Rovers attack traffic was soon heading in the other direction. Mason’s short pass allowed Graham to run most of the length of the park but with Buchanan free on his right Graham chose to shoot and was easily blocked.

Raith survived another scare in 11 minutes when McNeil came to collect Higgins’ lofted free kick, completely misjudged the flight and was lucky to see the ball skim off his glove and sail a yard wide of his own goal. Hardie had a great chance with a free header from the corner, but failed to get any sort of contact.


The Pars continued to look for the breakthrough; Hardie slipped in Graham in 17 minutes but again his shot was blocked and after Walker obstructed Cardle by the touchline Buchanan got ahead of his man but his header was well over. However the best chance came midway through the half – a Graham chip into the box was flicked first time by Buchanan into Kirk’s path and he hit it first time, but the ball crashed off the bar with McNeil well beaten.

McNeil had also completely missed a McCann cross and continued to look shaky when his clearance from Murray’s pass-back nearly hit Kirk. Instead the ball broke to Tadé but he slipped as he looked to go past Keddie and although Alex slipped too, the ball was cleared.


The Pars continued to dominate without quite managing to test McNeill. A Hardie ball into the channel released Buchanan and the ball was worked back to Hardie but he had to stretch to get the shot in and was well off-target, and then another Hardie pass inside Wilson allowed Cardle to cut inside onto his right foot but he delayed and any chance was squandered.

As long as it remained goal-less, Rovers still had every chance. We had seen little of Davidson, but a long pass in 37 minutes allowed Walker a sniff at goal but he over-hit his cross. Then, with half-time approaching the deadlock was broken with the classic sucker punch. A Buchanan trip on Wilson near the half-way line allowed the ball to be pumped into the Pars box where Ellis was allowed a free header. Smith initially saved well low to his left, but the ball squirmed from his grasp and Baird was on hand to bundle the ball home. 1-0 Rovers , and despite having been by far the better team the Pars trailed at the break. 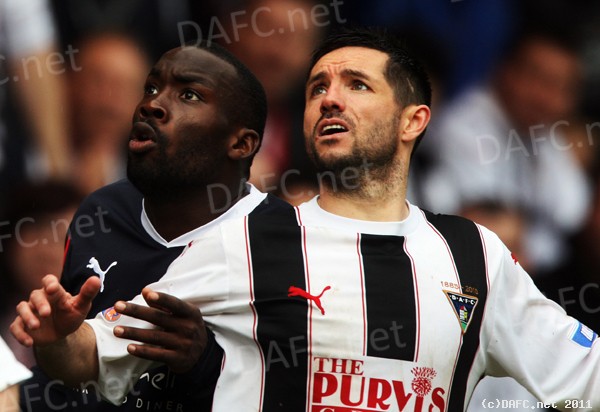 The only change at half time was McNeil opting to swap his orange outfit for a more subdued purple number, perhaps to calm his nerves. Instead Campbell seemed to be a tad jittery, needlessly nodding an over-hit Woods’ cross behind for a corner, but no further damage was done. In turn the Pars had an early scare when they failed to pick up Tadé but the Rovers forward hurried his shot and was wide.

However, just as thoughts of an early equaliser were beginning to evaporate, the Pars hit back. An exchange between Cardle and McCann was ended illegally by Murray, who was booked. Cardle’s free-kick was met by Higgins but his looping header appeared to present no difficulties to the unchallenged keeper but he opted to tip the ball over the cross-bar for a corner. Cardle swung it in to the back post where Hardie was unmarked and he nodded home. One apiece.