Motherwell showed the standard to which Dunfermline must aspire by outplaying their opponents with a controlled passing and moving game. Three down, the Pars launched a late comeback with deflected strikes from Graham and Cardle but any hopes of capping this with an equaliser were snuffed out in stoppage time when Higdon tapped home his second and Well’s fourth.


After Tuesday’s dismal performance in Methil changes were expected, and there were recalls for Mason and Hardie in the middle of the park, Cardle on the left wing and Kirk up front. Andy Dowie dropped back to right-centre-back instead of Rutkiewicz who dropped to the bench along with Graham and Buchanan while McDougall disappeared completely. It was still a 4-4-2 though – with Gallacher, Jason Thomson, Keddie, McCann, Burns and Barrowman also retaining their places. The usual youthful trio of Ryan Thomson, Willis and Young were listed as substitutes, and there was no place for Boyle or Potter, or the fit again Phinn.

As for Motherwell – this was a first chance to see some of Stuart McCall’s squad that had been receiving so many plaudits – Michael Higdon was a familiar face leading the line along with Jamie Murphy, and the impressive Chris Humphrey would look dangerous coming in from the right touchline. Tom Hatelely, son of a famous father (and famous grandfather for those with longer memories) would also add to the threat from the right from his role at full back. 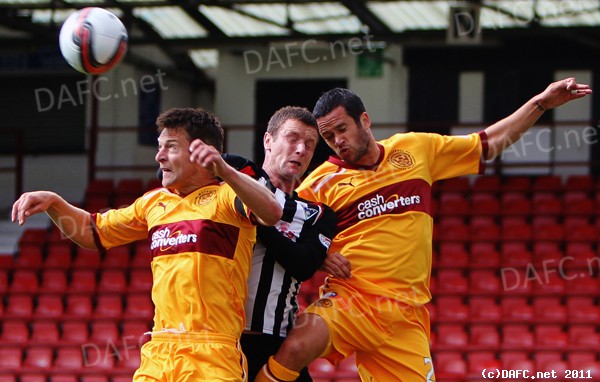 With the Pars back to playing in their preferred black and white stripes, it was the visitors who kicked off in their all yellow strip and they were soon passing and moving their way up the park with the home side hardly getting a kick. The Pars managed to negotiate the first 10 minutes without damage (Dowie being alert to Humphrey’s cut-back after Cardle had lost track of Hateley’s chip forward) but it was no great surprise when Well took the lead in 11 minutes, although the ease with which they passed their way through the centre of the Pars defence was concerning – a quick one-two resulted in the ball being played to Higdon who curled in his shot from 15 yards off Gallacher’s right hand post. 1-0 Well.

The Pars couldn’t settle – Kirk forced Randolph to hurry his clearance and after Mason and Burns had swapped passes like the ball was a hot potato Hardie hit a first time pass to Thomson high up the right wing, but he completely miscued his attempted cross. At least Gallacher was looking confident, making a good claim of Humphrey’s cross after Cardle had slipped and then McCann had mistimed his challenge, but he was in the minority. A rare passing move with the ball being switched from left to right saw Hardie try the Pars’ first shot in 17 minutes but he was well off target, unlike Hateley, who crashed a 30 yard free-kick off Gallacher’s post when Barrowman had been guilty of illegally regaining the ball after allowing himself to be robbed in the middle of the park.


Next to fluff was Mason - he was a bit hefty with a pass-back that Gallacher had to chase and chest down in 24 minutes before clearing, but the midfielder was less fortunate two minutes later, when failing to close down Murphy allowing the Scotland under 21 internationalist room to drive from 20 yards, the ball deflecting off Keddie’s heel and into the net with Gallacher going the wrong way. 2-0 Well.

Keddie’s day soon got worse when he joined Burns in referee Norris’s book after a trip on Higdon, but the Pars as a whole stemmed the tide a little with a slight change of formation, Barrowman moving over to the right allowing Burns to play more centrally. Dunfermline even equalised the corner count but once more they couldn’t threaten from the dead ball and were well adrift at the break.


There was no immediate sign of any radical changes in strategy when the Pars came out for the second half. Barrowman latched on to a lovely pass inside the full back from Thomson but his pull-back was poor and he was soon hooked for Graham. Meanwhile Kirk surprised everyone by outmuscling Craigan whilst competing for a long ball, but as he reached the bye-line Cardle failed to find himself space to receive the ball and the chance was gone. A goal would have been handy as the visitors went down the park and scored a terrific individual goal, with Humphrey accelerating in from the right, leaving defenders for dead then guiding the ball in at the far post. 3-0 Well.