And so the dream is over for another year - for a few brief moments it looked as if a shock might be on the cards but in the end Celtic ran out comfortable 4-2 winners. It’s been a brief Scottish Cup campaign, but memorable, and not just for the wrong reasons.


Sunday lunchtime is a strange time for a football match, but seeing the throng in Halbeath Road soon banished any lingering feelings on incongruity and with the temperature a balmy 6 degrees it was game on. There wasn’t a lot of choice with the Pars line-up – Macca recalled Burke as the extra mid-fielder in what he optimistically hoped pre-match would be a 4-3-3 formation, but was likely to be 4-5-1. Fleming was in goals, of course, with captain McCann at left back, McGregor recovering from ligament damage to feature along-side Dowie at centre-back, and Woods replaced Ross at right back. Phinn, Burke and Bell were the mid-field trio, with Gibson right, Graham left and Andy Kirk with his work cut-out for him up front. Lack of match fitness presumably cost Gary Mason a place on the bench, where the Pars went with Ross, Cardle, Holmes, Willis and Paterson. 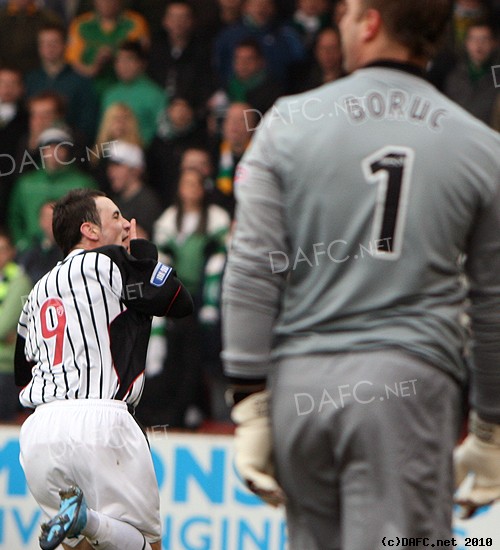 The Celtic line-up was laden with exotic names, the owners of which would have been nearly as unfamiliar to the visiting support (and to television viewers world-wide) as they were to the Pars fans, but was also a 4-4-3. Boruc was in goals, Caddis at right back, debutant Braafheid at left back and Loovens and Josh Thompson the centre halves. In midfield we saw N’Guemo, Crossas and the local boy (and new Celtic skipper) Scott Brown. Up front the Hoops had Morten Rasmussen, Diomansy Kamara and the marauding Georgios Samaras. Robbie Keane was forced to settle for a place amongst the substitutes alongside McGeady, Zheng Zhi, Rogne, and Zaluska. (I hope I’ve got that right – spell-check isn’t much use here...)

a succession of corners, the first of which caused all sorts of problems for Fleming, punching away initially The visitors in their bumble-bee hoops kicked-off defending the Cowdenbeath end but all the early action was in front of the Norrie. After a brief respite when the ball had to be retrieved from the gap between the stands at the corner flag, the visitors won before spilling the ball under pressure from Samaras when the ball was returned.


A quick Pars break had seen Phinn get the run of the ball to find Kirk who in turn found Gibson in space, but Braafheid got in the way of the winger’s effort from 25 yards. Other than that it was pretty much one way traffic for the first 15 minutes with Braafheid and Caddis in particular prominent. Then, just as the Pars seemed to have ridden out the storm, the visitors took the lead. Samaras took possession from a cross from the left, turned and shot, but the ball cannoned off the bar. After it was headed high into the air, the Greek got another shot, but McGregor blocked – still the Pars couldn’t clear and the ball came back to the edge of the box and in an instant Kamara had slammed home. 1-0 Celtic.

The heads may have gone down in the stands, but not on the park – incredibly within 60 seconds the Pars were level. Phinn did well on the right, took it to the bye-line, nut-megged Thompson and with Boruc covering the front post, picked out Graham near the penalty spot who bundled the ball into the unguarded net. One each!

Three minutes later and a stunned Celtic nearly conceded another. Gibson and Woods combined on the right, Calum chipped the ball into the channel , Kirk held off the combined efforts of Thompson and Loovens but his pass fell behind Phinn. Nick attempted the spectacular overhead kick, but it went past the post. No matter, in 27 minutes the Pars got a further chance. Gibson was supplementing numbers in the middle of the park and went down after a challenge – the Pars had possession on the right and advantage was played. Woods sent in a deep cross – too deep, only Bell made a meal of Caddis’s challenge and Charlie Richmond pointed to the spot – penalty! A bit soft, but Kirk wasn’t arguing, and tucked it away nicely – sending Boruc left and the ball right. 2-1 Pars. 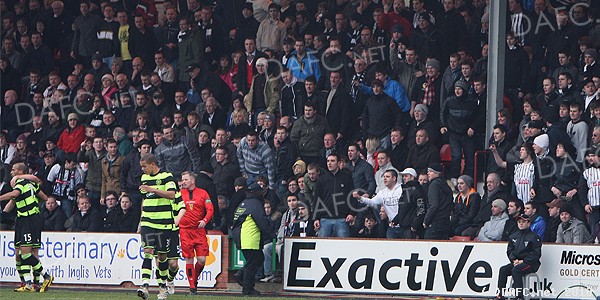 Could this lead last longer than the last one? The Pars seemed happy to let Celtic press them back, but the visitors struggled to create clear chances, at least to begin with. Graham was booked for a late tackle on Caddis and although that free-kick was defended, there were nervous moments when Kamara cut inside and his shot deflected off Burke, but Fleming held well. Woods was next to find his way into the referee’s notebook in 38 minutes, tripping Samaras after he’d been gifted a possession from a poor McGregor pass, and a minute later Burke was only marginally better with his pass-back, Fleming getting to ball just ahead of Rasmussen.

There were more shaky moments for the Pars defence – Burke seemed harshly penalised when he seemed to win the ball cleanly, and after a bout of head tennis in the Pars’ box, the same player headed behind for a corner, from which Loovens failed to find the target with a firm header. Three minutes from the interval the Pars got a break when Fleming couldn’t hold on to the overlapping Caddis’s shot but Burke was first to hoof clear. But just as the Pars looked as if they would keep the lead at half-time, Celtic equalised with a scrappy goal. Braffheid got past Woods to send in a firm cross; Brown’s header and follow-up were blocked, Fleming saved from Rasmussen but the great Dane was first to the loose ball to crash home the equaliser. 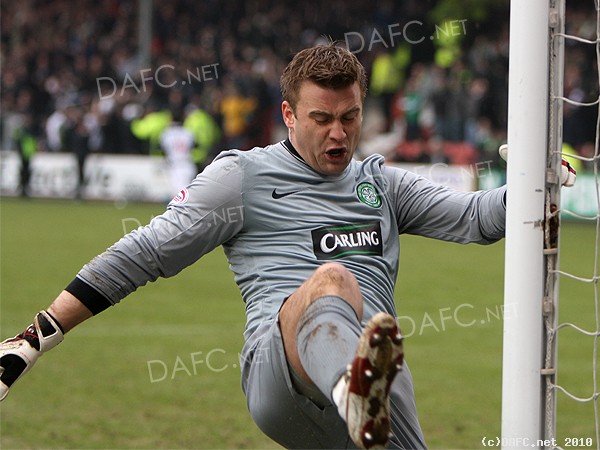 The visitors were out first after the break, and Robbie Keane was amongst them – taking over from Crosas, with Kamara dropping deeper to allow the Irishman to join the attack. The Pars started brightly, however, a neat Woods drag-back got him clear of Samaras but Thompson dealt with the cross, then Gibson came away from a sliding tackle on Braafheid with both the ball and space. A quick 1-2 with Phinn gave the opportunity for a left foot shot but Boruc held easily.