Dunfermline Athletic 3 Queen of the South 1

The Pars move up to fourth with a 3-1 win over Queen of the South. McDougall and Woods have the Pars two up at the break and a late Bell penalty seals it after Weatherston pulls one back but the game is marred by two unnecessary red cards.


With the latest batch of injuries there might have a been a few optimistic fans dusting down their boots in the hope of a last minute call up, but as it happened Macca managed to fill the positions comfortably. McDougall was an obvious choice to play alongside Graham as part of a two-pronged strike force, Graeme Holmes came in on the right side of midfield, Burke got the nod alongside Bell in the middle and Willie Gibson started on the left-wing. Only the back 5 could have been predicted with reasonable certainty, reading from the right: Woods, Dowie, Higgins, McCann the skipper, and Fleming in goal. Phinn and Mason started on the bench, as did Greg Ross, Ross Campbell and Greg Paterson.

Queens, also playing a 4-4-2, had a familiar look about them however, Derek Holmes looked like he would be a handful for Higgins, who was assigned marking duties on the big striker, McLaren always threatens to be dangerous on the left and Quinn and Scally looked to pull the strings in midfield.

The visitors took the kick-off, and it took a good couple of minutes for the Pars to venture across the half way line, McDougall skipping past McKenna before finding Graham at the edge of the box, but there were plenty of bodies in the way to block his shot from the edge of the box.

There wasn’t much to get excited about in the early stages: Woods was tight with a back-pass which Fleming clattered off Holmes and seemed more intent about berating the full-back than looking to see where the ball had gone, and at the other end Dowie headed over from a near-post corner after Graham had tried to take advantage of a poor Lilley header. In fact, the biggest cheer early on was for Alex Burke trapping the ball on his head and moving towards his goal with the ball seemingly glued to his scalp. 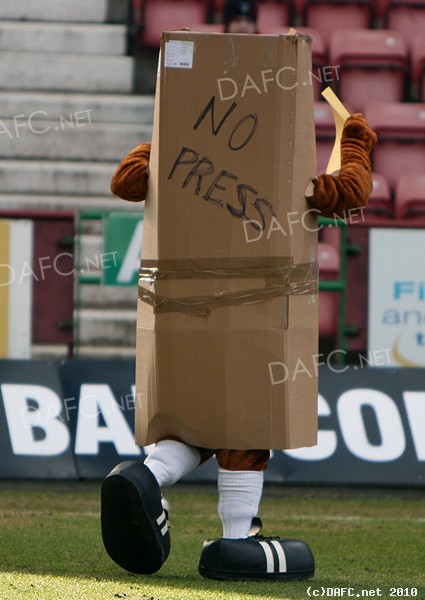 Gradually the Pars began to look the more likely. Woods got the ball in 12 minutes, essayed a stepover, cut inside but his shot was straight at Hutton, and Burke blazed miles past after Gibson’s free-kick from 35 yards hit the defensive wall. Then in 18 minutes, out of nothing, the Pars took the lead, in simple fashion. Deep in his own half Woods hit a 50 yard ball over the top to send McDougall clear, with McKenna trailing in his wake. McDougall tucked the ball neatly under keeper Hutton and it was 1-0.

The game became pretty scrappy – the Pars were maintaining a high line, and seeking to exploit the pace of McDougall and Graham by getting the ball forward quickly. The visitors were caught offside several times and there were ironic cheers from the travelling support when they won a rare free-kick on the half hour. However, they should have equalised 4 minutes from the break. The Pars had plenty of possession but play stalled due to lack of movement and Graeme Holmes lost the ball. Queens quickly moved the ball to the other end where Kean set up Derek Holmes but the ex-Jambo swept the ball over the bar from inside the box. A let off for the Pars, and this was compounded when they doubled their lead 2 minutes later. McCann got to the bye-line on the overlap, his attempt to cross was blocked, and rather than try again, he laid the ball back to Gibson 40 yards from goal.


“First time” was the shout. It seemed a good idea, but not good enough for our Willie. He took a touch, then sent in a wicked cross picking out Calum Woods ghosting in unmarked at the far post, and the full-back turned the ball into the net from 6 yards. 2-0 Pars.
Into stoppage time and again Derek Holmes should have done better, heading over from nearly under the bar after Burns had capitalised on a McCann miskick. 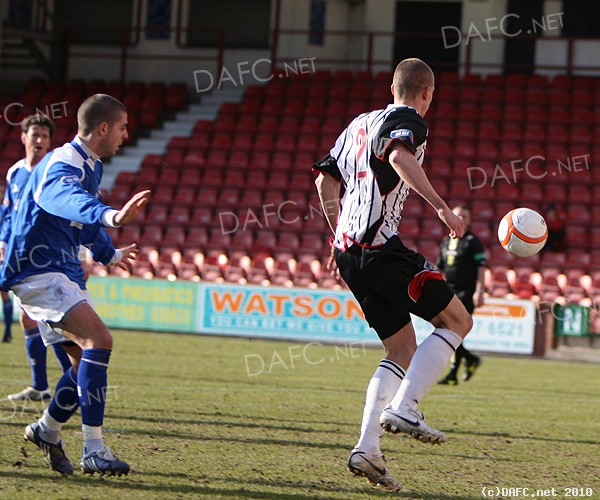 An unmarked Woods makes it 2-0

Queens made two changes at half-time – the tricky Leon Knight coming on for Kean, and Joe Hammill coming on for Lilley who had been struggling with an injury. This necessitated a couple of positional changes with McKenna moving from full back to centre-back (a switch that would have consequences) and Scally dropping to right back. The Pars soon made a switch of their own, Gibson giving way to Campbell with Graham moving wide. However, whether it was the changes or the need to chase the game, the Dumfries team began to dominate. In 57 minutes a poor Dowie header was met on the volley by Holmes but Fleming made a fine save leaping to his right. In 64 minutes Fleming surpassed himself with a save from Knight after Burke had given the ball away when he had the opportunity to clear.