Two of the teams chasing Rangers at the top of the division matched up at East End Park, with the home team running out victorious by the odd goal in five. Poor defending from set pieces twice allowed the visitors to take the lead; twice the Pars equalised through the merest touch by Thomson from a Drummond corner, and then a Byrne deflection, before late substitute Lawrence Shankland poked home from close range to edge the Pars ahead. A late red card for El Bakhtaoui made it harder but Dunfermline held on.


This was potentially one of the most important games of the season. Get a positive result against their closest rivals in the league table and the Pars could look forward to generating some real momentum and consolidating a play-off place. Lose the match and as well as having Stranraer snapping at their heels, confidence would take a knock.

Manager Jim Jefferies made a couple of changes as expected. For a start Alex Whittle was still on the injured list having done his hamstring at Ochilview, so Ross Drummond started at left back, and Stephen Husband wasn’t an entirely unexpected casualty following his poor performance in the same match, Ryan Thomson starting in what looked like a 4-3-3. New signing Lawrence Shankland had to be satisfied with a place on the bench as El Bbakhtaoui retained his jersey after a fine performance last week. Faissal was joined by Ryans Thomson and Wallace, the latter often dropping back to cover the midfield. Falkingham was also back to captain the side following his hand injury and he had Byne and Geggan for company in the middle. The defence was the relatively young Williamson, Young, Martin and Drummond whilst Scully had the gloves.

On the bench there were plenty of attacking options – as well as Shankland, Moore had dropped down, Smith was there, and Kane, Husband, the recovering Millen and Goodfellow were the other options.

As for the Stranraer, their men to watch were going to be their strike pairing of Grehan and Longworth, who had scored loads of goals between them this season, and of course, former Pars star Stevie Bell, who had taken years to recover from a horrendous Achilles tendon injury sustained whilst playing for the Pars at Cappielow.

Curiously, it was almost exactly a year ago that Jordan McMillan had won the toss, yet inexplicably chosen to play “the wrong way”. That game was also remarkable for the surreal event of Airdrie scoring after four minutes and the goal being greeted by applause from all round the ground, as it coincided with the minute’s applause in memory of Norrie McCathie. This time it was Stranraer who chose the direction of play, and it was the Pars who kicked off, shooting towards the McCathie end.

The Pars started brightly with an early corner and an early El Bakhtaoui shot that whistled past the post. As the game moved into the fourth minute, a nice Byrne ball met Wallace’s run into the box and he was upended by McKeown. It looked a stonewall penalty, and referee Muir agreed. By now, the ball-boys’ flags had signalled the minute’s applause, and Wallace took responsibility for the kick. Ryan took an abbreviated run up, hit the ball to the keeper’s left as usual, but it hit Mitchell’s trailing leg and the ball spun over the cross-bar. 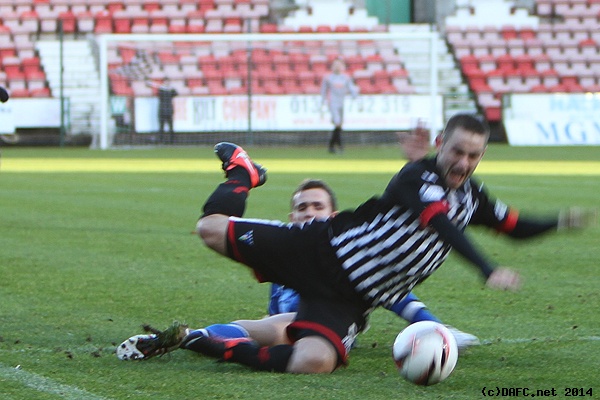 Ryan Wallace is clearly tripped inside the box.

This was a bad miss, clearly, and this was compounded when Drummond’s deep corner was retrieved by Wallace and he seemed to pass the ball to Thomson at the near post, but his little deflection was well saved low down by the keeper.

The other consequence of this was that Stranraer were boosted, and they very nearly scored soon after, some neat interplay freeing up Longworth, but as he attempted to take the ball round the keeper, Scully stuck out an arm and managed to claw the ball away. Not long after Longworth was again involved, passing the ball wide to Stirling, but his raking shot was well held by the Pars’ keeper. This was a little bit in vain, though, as the visitors did take the lead from the other wing. A quickly taken corner saw Bell lose his marker by running to the front post, and he stooped to head home past the unguarded Scully from 6 yards. 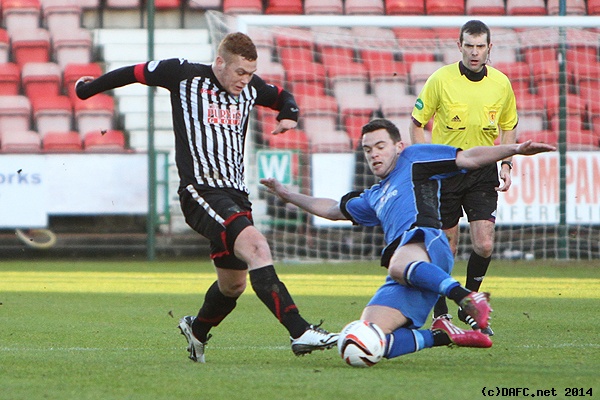 Midway through the half the Pars had a half chance to equalise when Geggan found El Bakhtaoui with a forward ball. Mitchell was well out of his goal, but decided to come forward rather than go back, and this intervention proved timely as El Bakhtaoui couldn’t connect properly with his attempted lob from 35 yards.

The Pars were struggling to make any impression as the Stranraer players were quick to close everything down, and it took fully ten more minutes before they formed any sort of threat whatsoever, a neat turn from El Bakhtaoui winning a corner on the right. Drummond was on corner duties, and he had already shown some commendable variety, mixing up near post balls with balls right under the cross bar and slightly deeper efforts. This one was to the near-post and it looked like Thomson got the merest of touches to nod it in off the keeper for the equaliser. 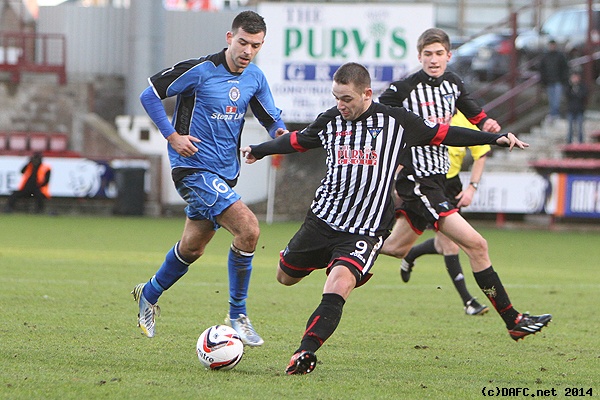 That goal was much needed as the Pars didn’t look like doing much else that half. A free-kick was won in Husband range, but Wallace hit it straight of the wall and that was pretty much that. Still, the Pars believe they can win late, although they would have to score at the “wrong” end to do so. 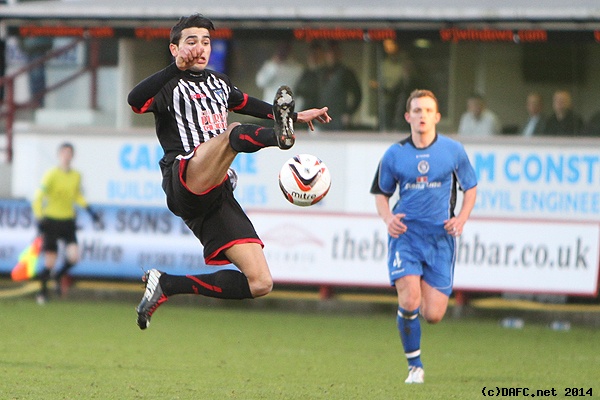 The second half got under way with no changes to either side. There was nearly an awkward moment when the referee got in the way of Falkingham’s clearance, the ball breaking for Stranraer at the edge of the area, but the position was defended before the situation got really embarrassing for the official. However, the Pars only had themselves to blame when they failed to defend a free-kick, McKeown getting a free header 6 yards out and planting the ball past Scully.