Dunfermline Favourites For The League One Title ?

Can They Live Up To Their Billing?
The fallout from Simon Murray’s last-minute winner for Queen’s Park in last season’s SPFL Cinch Championship Play-Off Semi-Final Second-Leg has barely settled, but the time has come to already start looking towards the upcoming SPFL Cinch League One campaign. Despite last season`s setback, it’s hard not to be in a buoyant mood ahead of next term, especially after victories over East Fife and Buckie Thistle in the Premier Sports Cup Group Stages. The Pars won those two games by a combined score of 7-0 and it’s easy to see why online bookmakers such as Unibet, who provide betting and offers on Scottish Football, have made James McPake’s side the favourites for the title.


Young Striker Lewis McCann was one of a few players to show improvement last season, scoring his first four senior goals throughout the Championship campaign. He is already just one shy of this total already, having scored three of those seven Premier Sports Cup Group Stage goals, and at just 21-years old, the Northern Irish Under-21 International has the potential to become a key player at East End Park.

The same can be said for his strike partner Nikolay Todorov; the former Bulgarian Under 21 International bagged a brace against Buckie Thistle, and he will be hoping he can fire his side back to the second-tier of Scottish Football at the first time of asking!

Captain Graham Dorrans Remains The Key Man
Graham Dorrans has been there and done it all throughout his career. The Glasgow-born midfielder has 134 English Premier League appearances to his name, with Clubs such as West Bromwich Albion and Norwich City. The Central-Midfielder also has 12 caps for Scotland, which should tell you all you need to know about his talent.

Despite his age – 35 - his arrival from Australian-side Western Sydney Wanderers was seen as somewhat of a coup, and the fact that he hasn’t jumped ship and will continue to ply his trade in Scottish Football’s third-tier says a lot about his character.

Injuries limited the former Rangers man to just 23 appearances in all competitions last season, including missing eight of the nine games throughout the Club`s run-in. He would have been hoping to get a good pre-season under his belt so that he could have been at his best when the league campaign gets underway on July 30th, but an ankle injury has hampered his early season aspirations.

A Squad In Transition
Should the Pars be able to live up to their billing as competition favourites, you get the feeling that they may need to strengthen in numerous areas across the pitch. They have lost no fewer than four players from last season’s most regular starting eleven, with Dom Thomas, Steven Lawless, Ryan Dow and Dan Pybus all departing the Club for pastures new.

Squad-Players Leon Jones, Lewis Martin and former Brentford youngster Reece Cole have also departed and it has left Dunfermline looking a bit light on numbers ahead of their curtain raiser against Alloa Athletic next Saturday.

Loanees Jakub Stolarczyk, Efe Ambrose, Coll Donaldson, Bobby Kamwa and Liam Polworth have also returned to their Parent Clubs, leaving McPake short of experience but a group filled with young Academy starts who are hoping to make a big impact throughout the campaign.

A positive signing, however, is that of Centre-Back, Kyle Benedictus. The 30-year-old Scotsman made 41 appearances in all competitions for Raith Rovers last season as the Kirkcaldy Club missed out on the SPFL Cinch Premiership Play-Offs by just two points.

The former Dundee defender is an experienced campaigner, with more than 380 appearances to his name, and he has captained the Pars throughout their opening Premier Sports Cup Group Stage fixtures, in the absence of Graham Dorrans. He should prove to be a rock at the heart of a defence that was shaky on occasions last season, providing McPake with a solid foundation to build upon.

Who Are The Main Rivals For The Trophy ?
Falkirk appear to be the main challengers to Dunfermline’s potential title victory. The Club were a Premiership side as recently as 2010, but have now been languishing in the third-tier for the last three years.

They had a dismal campaign last time out, finishing a lowly sixth after being expected to challenge for the crown. Experienced manager John McGlynn has been appointed at The Falkirk Stadium, in a hope he can turn their fortunes around.

Queen of the South are also expected to be contenders. Like the Pars, they were relegated from the Championship last term and will be gunning for an immediate return under the stewardship of Player-Manager and former Pars fans favourite, Willie Gibson. Airdrieonians – also managed by ex-Pars and current Players, Rhys McCabe and Callum Fordyce – will also fancy their chances after narrowly missing out on promotion last season, losing the Play-Off Final over two legs to Queen`s Park. 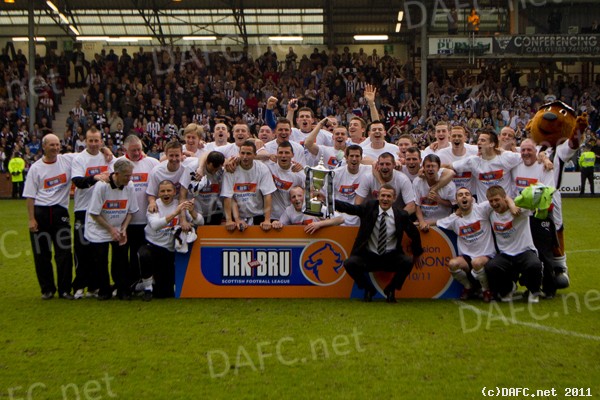