DAFC have today released a press statement from the Board regarding Jim Leishman`s position at DAFC:

There have been numerous press articles recently concerning the position of our Manager Jim Leishman.

These are without any foundation whatsoever and the Board of DAFC wish to state publicly that they continue to have the utmost confidence in Jim Leishman and his Management team. At no time have the Board discussed or considered approaching any other candidate. 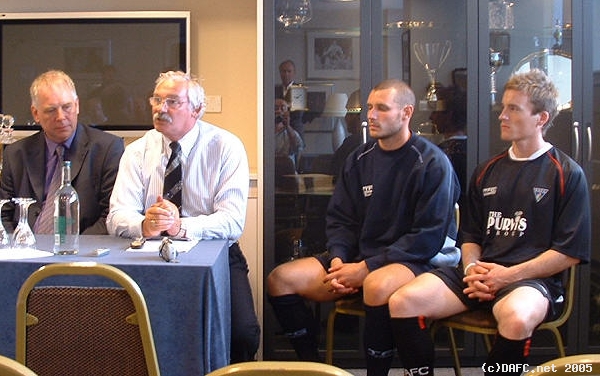 New signings have been at a premium due to ongoing financial restraints.

Jim Leishman and his team of former PARS players have only just begun a reconstruction of the first squad, the development of a successful youth programme and the extension of our growing community programme. The aim as always is to restore DAFC to its previous respectable position in Scottish football. The Board recognises that these challenges will not happen overnight but must be viewed as a two to three year programme. There will undoubtedly be ups and downs during this period but the Board are determined and committed to taking the medium term view and there will be no knee-jerk reaction by the Board in the event that success is not immediately forthcoming.

Only a matter of a few months ago Jim was hailed by all as the saviour of the Club’s Premier League status. The reality was that this was exactly the case - we were and are indebted to the new team’s efforts at that time.

In conclusion, Jim and his team will be with the PARS for some considerable time. Jim has been offered and has accepted a long-term contract, which is a measure of the esteem we have for him as an individual and a professional. There is no one more dedicated to the PARS cause then Jim Leishman and we wish him well.

A crystal clear statement of intent from the DAFC board of directors there.

Hopefully the Pars can now get back to concentrating on matters ON the park, starting with this evenings home game against Hibernian.

May 2005 when the amazing survival act took place.