After the international break, Dunfermline return to action still looking to make amends for the disappointing and fruitless trip up to Inverness two weeks ago. With some stinging criticism of the performance, an improvement on Saturday will go a considerable way to getting away days back to being enjoyable events for both players and supporters!

The centre stand at Fir Park will be host to Dunfermline fans that travel through to Motherwell on Saturday afternoon, with numbers having depleted to the extent that the large away stand is no longer required for this fixture. However, the move saw a long run of matches without victory come to an end earlier this year as The Pars won 3-2 with Ian Campbell (his only goal for the club) Mark Burchill’s penalty and a rare goal from Gary Mason providing the second of three consecutive wins.

Personnel has changed considerably in the six months that have passed, with Jim Hamilton moving sides since his eventual departure from Motherwell. Having his first return to Fir Park since his transfer, Hamilton will no doubt come in for a special welcome back from an element of the home support, here’s hoping he really gives them something to moan about with his first goal in Dunfermline colours!

Stevie Crawford will no doubt continue alongside him as he aims to continue his impressive return to the club. Both new strikers have found chances very few and far between in recent games, as Hamilton admitted to the press this week by saying he has only really had one chance in the five games he has played! 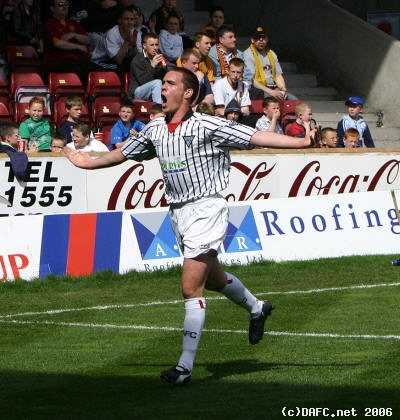 The lack of ammunition provided by the midfield has fast become the main spoke in the wheels for a team that has shored up its defence in comparison to other recent campaigns. Even with the excellent Phil McGuire missing recently, the defence has not looked overly stretch and Dorus De Vries especially was unfortunate to be on the losing side in that turgid match at Inverness two weeks ago.

However, the midfield are failing to gain similar plaudits and much more conviction is needed if Crawford and Hamilton are to be given the opportunity of adding to the goals scored column. They look like having an extended run up front, with both Jim McIntyre and Noel Whelan still months away from a return to any football action at all. Mark Burchill, however, has made remarkable progress from his double hernia operation and has recovered quicker than anticipated. 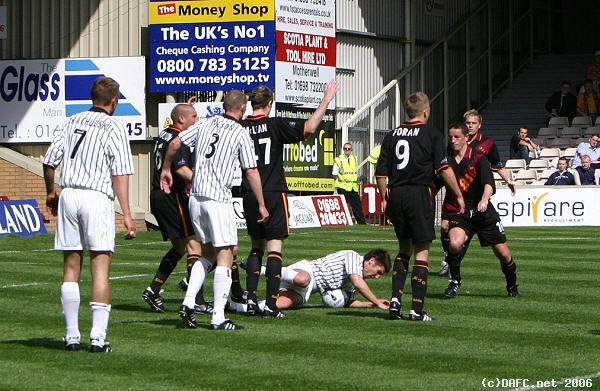 Burchill won, then scored, a penalty back in May

Burchill was, of course, by far the main source of goals during the whole of last season, and has yet to open his account for this campaign. With a return to training this week, hopefully it will not be long before he does so this season, giving a whole new option up front. With Burchill’s pace and predatory instincts, Crawford’s guile and excellent link up play and Hamilton’s aerial ability and workrate, the coming weeks will hopefully be more exciting times…….

Motherwell suddenly sparked their dismal season into life two weeks ago, with a surprising 5-0 win over Kilmarnock. Although the scoreline did appear to flatter the home side somewhat, it is an excellent result against one of the most consistent teams in the SPL. It was also the latest in a string of results that show any side from outwith the top three, currently, is more than capable of beating anyone else. If Dunfermline, or indeed anyone else, was just able to string a run of good results together at some point, a charge up the league table would be the end product.

Calum Elliot, on loan from Hearts, will be one dangerman to look out for on Saturday. Whilst Dunfermline were also linked with the under 21 international during the transfer window, it soon became clear that Motherwell were the front runners for his temporary signature. Alongside the always dangerous Scott McDonald, Motherwell will be looking to build on that 5-0 victory with another home win.