Jim Leishman was the master of ceremonies for the night, with John Yorkston, Gavin Masterton, Jimmy Calderwood, John Ritchie and Hamish French taking questions from Pars fans. Gary Dempsey and Noel Hunt were well received as they represented the playing squad.

Jim Leishman started the proceedings by saying that GeordiePar from our very own www.dafc.net would have his many financial questions answered in time by the club, watch this space!

Moving onto the first of the speakers, Jimmy Calderwood was given a few taxing questions about the playing side of the club. First off, he was asked why Dunfermline tend to sit back when winning matches, Motherwell a couple of weeks ago being a prime example. JC replied that it was certainly not of his doing and the team have to take a collective responsibility for changing the game plan.

Next up was a question re Jimmy Nicholl. Would he be taking on the Northern Ireland job? JC announced that the Northern Irish FA would be making a decision in January and all will be revealed then.

With regards to his tactics, there were a few queries.

Why defend corners with all 11 Pars players in the box? JC replied that he "prefers to have one player in the opposition half, though often all the players have to be in the box to defend against taller teams"

Why do Dunfermline score more goals in the second half when playing at home? "No idea" was the honest and accurate response from the manager!

With regards to his favourite formation, Jimmy said he would ideally play a 4-4-2 formation at home, whilst changing to a 3-5-2 away from home. On a similar note, the manager admitted he honestly did not have a "favourite eleven" having so many good players at his disposal right now. 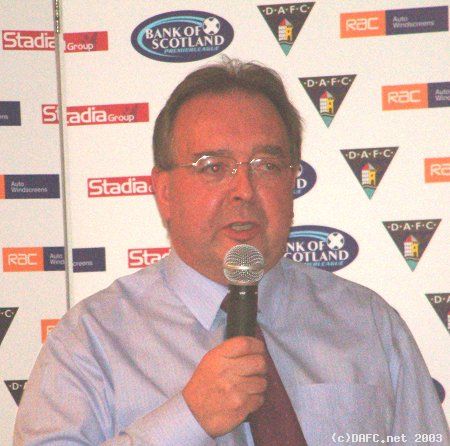 Gavin Masterton, the man with the financial plan

After a fine applause, the microphone was passed to DAFC chairman John Yorkston who took on questions regarding the club in general.

Mr Yorkston candidly answered questions about a number of subjects ranging from the introduction of season ticket deals from fans who cannot attend all home matches, to the possibility of entering the Inter-Toto cup next season.

On a similar note, he said that Dunfermline SHOULD be able to play UEFA cup matches at home (if we qualify of course...) next season. It is by no means a certainty, but UEFA would look at the situation in a positive light should it arise.

Regarding the pitch itself, a new rubberised surface should be going down onto the black tarmac areas once conditions allow.

The introduction of "block" season tickets for ten games a season, as an example, was something the club was currently looking at. This would aid Pars fans who currently cannot attend all matches due to weekend working commitments.

The lack of atmosphere was covered by the fact that away fans from smaller clubs currently sit 100 yards away in the Cowdenbeath end. Costs allowing, fans from clubs bringing smaller groups of supporters could potentially be housed in the North East stand, bringing them closer to Pars fans. This is something the club will look at in the future.

Moving onto Dunfermline`s own financial guru, Gavin Masterton, the DAFC director was more than open about the current poor economic situation facing ourselves and many other clubs.

With regards to the planned developments at East End, the planning issues relating to the office block are still ongoing. It has been drastically reduced in scale, yet 60% of the planned office space has been pre-let before a foundation has been made.

The Hotel development requires a proposal from a long term operator that would best benefit DAFC before progressing further in the meantime.

For those who want to study facts and figures, DAFC certainly have debts lower than those reported in the media recently. Only Ł150,000 is currently owed to external creditors, whilst the total club debt is Ł3.2million in terms of a overdraft facility. Numerous plans are in place to reduce this in the long term.

New directors have recently been appointed to prevent cash flow "crises" similar to those suffered recently. Once the future developments are fully up and running, DAFC retain 75% of any profits made thereafter.

Mr Masterton admitted to being the main shareholder of Stadia Developments, who will be funding all future developments, not Dunfermline Athletic Football Club.

Dunfermline currently have a 125 year lease on East End Park, which commenced less than 10 years ago, with the lease fee being in the region of Ł200,000 per annum.

Many searching questions were hopefully answered by Mr Masterton who had an almost "open book" accounting policy with regards to financial matters concerning the club. 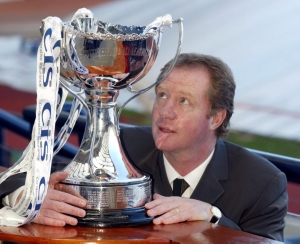 Jimmy Nic, will he stay or go?

Moving back to footballing matters, both John Ritchie and Hamish French spoke about their almost joint venture into grooming Pars players for the future.

John Ritchie is in charge of all "young" Pars sides including the now full time under 19 side who play in the professional SPL league for that age group. He is keen to retain the best local football players that can be identified for Dunfermline Athletic, with numerous grass root enquiries being made to ensure than happens.

Hamish, on the other hand, in his new role as Communities Coach, is concentrating on children simply enjoying the game no matter their skill level or background.

Frenchie stressed that his new role is not about seeking out the best talent, though he will certainly pass on any such youngsters to John Ritchie. From helping disadvantaged children involved with Social Work departments, to providing healthy eating plans for children, Hamish is employed to try and ensure that kids are involved in football no matter their basic skill level.

Once all the speakers had a turn of the microphone, it was onto an open floor with any panel member being open to question.

Highlights include the fact that John Yorkston mentioned that a potential new TV deal is being discussed by the SPL management committee in the New Year.

Gavin Masterton was asked about the high wages to turnover ratio. The targetting 60% figure would simply mean a return to part time football in the current climate.

Rock Steady`s stewards were criticised in part by both the fans and the panel for the over zealousness at times. The club are aware of problems in this area and assured fans that Davie Dickson (health and safety office on matchday) would look into the issues raised.

Youssef Rossi is STILL a registered DAFC player! Raja Casablance have not processed the agreed payment for the wayward Moroccan, so he remains in limbo. Jimmy Calderwood was seething about the situation but would not say any more until the deal was done and dusted.

All in all, it seemed a very productive evening for both the panel and the fans who attended.

This is the first of a number of similar events, with Edinburgh and other surrounding areas being targetting in the future.

Thanks to all who attending the event and to the DAFC employees who gave up their time to answer questions on the night.