Willie Logan featured in the Dunfermline Press along with his wife Karen and son Ewan on Thursday 22nd May.

His decision to enjoy life to the full whilst suffering from a terminal brain tumour is a brave and honourable one.

Whilst Willie has been at pains to say he does not want to receive any charity, his choice is for people to donate to the Brain Tumour UK charity, many Pars fans were moved by his fate after reading the Press article.

An avid Pars fan since the early 1970s, Willie is a well known face having had a season ticket on the terraces, then the Norrie McCathie stand and now the North West stand with Ewan who is just starting out as a Pars fan.

After much thought, his favourite Pars XI (which he would no doubt be happy to debate with anyone!) is:

Willie still reads dafc.net and passed on his thanks to everyone who has wished him well. He is not able to post just now but has asked that if people do wish to donate anything at all, then he would be happy for www.dafc.net to collect donations in from Pars fans.

Any money raised, Willie would like to see put towards www.dafc.net sponsoring something at East End Park for the forthcoming season, for example the disabled section within the Norrie McCathie stand.

A former member of the Pitbauchlie Travel club, he will be a well known face to many Pars fans who have supported the club over the years. 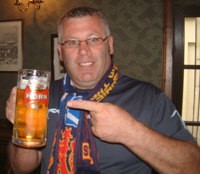 Brian Duncan has already pledged that any money brought in for the Euro 2008 prediction competition will go towards the dafc.net fund being collected, so please get your entries in for that if you wish to take part.

There is also a fund raising dinner being held at East End Park on the 12th September in the Kingdom Suite. Jim Leishman and Dick Campbell have already volunteered their services for the dinner being organised by QFI Roofline of Dunfermline. The dinner is now a sell out.

Willie would once again like to pass on his thanks to everyone who has posted their kind wishes on the forums to him.