Martin Who? The absence through injury of the main man who had inspired the recent Martin mania meant the Pars were not going to clinch promotion the Hardie way, but rather through the efforts of the other players in the squad. As it happened, an early close range goal from McDougall sent them on their way, and a superb second half David Graham strike wrapped up the championship.


There was consternation amongst the large travelling support enjoying the sun in the Wee Dublin End as one by one the Pars team ran out for the warm up – Rutkiewicz was back as was Pat Clarke, but where was Hardie? Injured, was the answer, and so Dowie would come into the midfield, and McDougall would partner Kirk in attack, meaning Buchanan would join Higgins, Phinn, Clarke and Paterson on the bench. So we went with Smith in goals, Woods and McCann as the full-backs, Rutkiewicz and Keddie as the centre-backs, Dowie and Mason in centre midfield, Graham and Cardle on the wings and Kirk and McDougall up front. Would one of these players join the likes of Mark Millar or the watching John Watson as a promotion goal-scoring hero?

As for the home team: no-one likes to have the championship won at their ground, and despite his Pars credentials, Allan Moore would send out a side keen to avoid defeat. The impressive Bachirou and Tidser would be at the heart of the midfield, Jenkins would look to use his height to supplement the attack as often as he could, and O’Brien and Lyle would be dangerous from the wide positions. 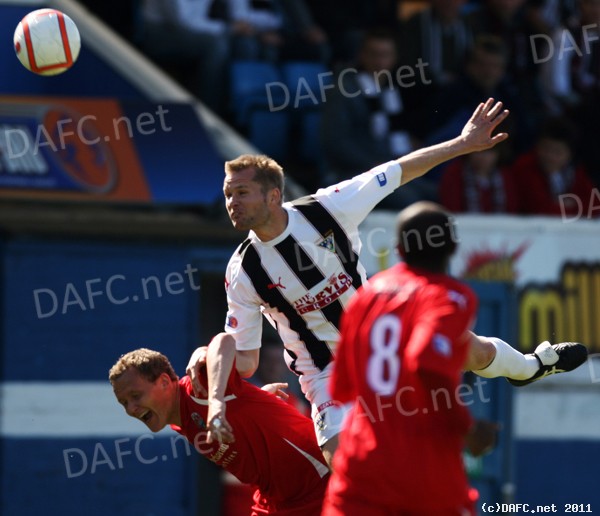 The Pars won the toss and opted to shoot away from their own support in the first half, leaving Morton in their all-red kit to kick-off. An early (and soft) foul conceded by McDougall allowed the confident Tidser to try his luck from 40 yards, an early sign of the home team’s willingness to test the Pars’ keeper from distance. However, in common with most of the later efforts, this was off target.

Meanwhile Cardle had an early chance to put the home defence under pressure when he was obstructed running on to Dowie’s pass. However, with 3 big men up looking for the header, Joe hit it straight to keeper Stewart.

In games such as this nothing settles the nerves more than an early goal and it came in eight minutes. Tthe Pars won a corner on the right, but Cardle’s near-post ball was poor and easily dealt with. However, Woods’ pass allowed McDougall to win a second corner and this time Joe hit it deep. A towering header from Rutkiewicz was diverted by McDougall standing virtually on the line, beyond Stewart and into the net. 1-0 Pars, and just the start needed.

That should have settled the nerves, but a breakdown in communication meant a Keddie back-header wasn’t collected by Smith and a corner resulted. With no-one seemingly willing to deal with the inswinger it took Dowie to get a touch to send the ball behind for a second corner but this time the defence had woken up and danger was averted

The Pars searched for the second goal and midway through the half they nearly had it. A sequence of throws-in up the right touchline eventually got close enough to the Morton end for McDougall to try some of his tricks and create space for a shot. His left foot effort from 16 yards looked to be heading in before Stewart clawed it away at the last second. Another Rutkiewicz header from the corner hit McDougall but this time the ball was cleared. A minute later Cardle intercepted and broke at pace but chose the wrong option, delaying his pass until Kirk had strayed off-side and again the chance was wasted.


A few minutes later a similar combination of throws-in and a McDougall run and shot was again palmed away by Stewart, but this time only as far as Graham who hurried his left-foot shot and dragged it past the post, when more composure would surely have resulted in the second goal.

Would the Pars regret this profligacy? Smith hadn’t had a save to make, but this was never going to be the case for long, and in 32 minutes Tidser hit a 35-yarder which Smith stopped, yet spilled, but was alert enough to grab the ball with Keddie providing interference.


Morton were playing some decent stuff in the middle, with Tidser involved in most of the good work, and after a period of pressure with the Pars players not quite knowing who to pick up, he released O’Brien who flicked the ball beyond the advancing Smith only for Keddie to clear off the line.

Referee Winter was having a quiet game, content to let play flow, and sensibly keeping his cards in his pockets, although when a second ball suddenly appeared on the pitch in 40 minutes he restarted with an uncontested drop-ball. Still, no damage was done. As the game edged towards the interval. Rutkiewicz came out of defence to release Cardle and his cross was headed across goal by Kirk; ideal for a Hardie, but in his absence there were no takers. The Pars had probably deserved a second goal but would be satisfied with the one at the break. 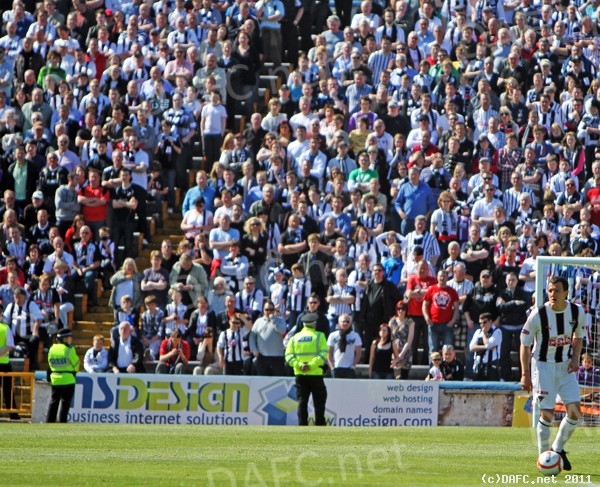 A large away support follows the Pars

Allan Moore made a change at half-time, bringing on Carlo Monti at full back and he made an immediate impact down the left. An early attempt from Kirk to bring Woods into play was misplaced, and merely dragged the Pars full-back out of position and as Monti fed Bacharou Mason tripped the Frenchman at the edge of the box. Lyle was on target from the free-kick and although Smith again couldn’t hold the ball first time, he turned it wide and clutched at the second attempt.

However, the second goal arrived and what a goal it was. This time the Pars were pressing deep into Morton territory and Mason nicked the ball and played in McDougall who switched to Graham on the right. He cut in onto his left foot and although his 20 yarder appeared to be heading wide when it left his white boot, there was extravagant curl on it, and it bent in at the far post. 2-0 Pars, and surely the title was heading to East End Park?