The Pars have struggled against Morton in recent seasons and this game was no exception. After being totally outplayed, out-muscled and out-classed for an hour, tactical changes gave them some hope and Andy Kirk’s 84th minute penalty provided more cheer, but it would have been an injustice had Morton failed to win this.


Jim McIntyre made 3 changes to the starting eleven as he reverted to a 4-4-2 formation. Back came Glass, Thomson and Kirk, with Loy, Woods and Ross making way, the last dropping out of the squad completely, along with David Graham. Thus the team that took the field in their all-yellow strips, but wearing black armbands in memory of Mary Leishman, was Gallacher in goal, a back 4 of Thomson, Shields, Wilson and McCann, a mid-field quartet of Bell, Glass, Holmes and Phinn, with Kirk joining Bayne up front. Mole and Reidford retained their places on the bench with Alex Burke getting a look-in as well. 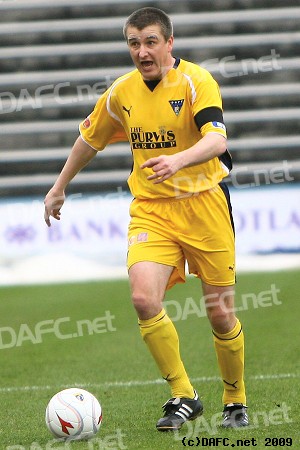 Morton made 4 changes, adopting a 3-5-2 set-up with recalls for McManus, Paartalu, Jenkins and Grady and the first incident of note, a deflected shot from Jenkins which Gallacher struggled to push past, was an indication of the way the first half would develop.

Minor knocks to Kirk, Bell and Thomson didn’t help the Pars settle, nor did Greacen’s 9th minute bodycheck on McCann for which he was rightly carded, but the game began to develop a pattern. The Morton back-line were gobbling up all the long balls hit their way, and although Glass was trying to spray the ball from side to side the Pars lacked penetration. For their part, Morton were using their strength in the air, and pace on the wings (particularly through McAlister on the left) to cause problems.

Jenkins had Gallacher scrambling with a header in the 9th minute, but it was safely past the post, before Glass had the Pars first attempt of the half from distance, which flew over the bar and out of the ground. With the spare ball being sent for but not required McIntyre sprung from the technical area to back heel the extra ball off the pitch, apparently without incurring injury.


There followed 10 minutes of Morton half chances as the Pars struggled to control the ball or retain possession. A break from a quick throw was fed back to McAlister but his shot was too hurried; Shields took the ball off Wilson’s head but Weatherson was unsighted and couldn’t control his shot; Thomson wasn’t quick enough to get Bell’s return pass, and with him out of position and Shields missing his tackle as Morton broke, Gallacher did well to beat McAlister’s near-post shot away, before easily pouching Weatherson’s flicked header 3 minutes later. However the goal was coming and it duly arrived in the 28th minute. Glass and Thomson couldn’t dig themselves out of hole by the touchline, McAlister sped away leaving others trailing in his wake, crossed to the back post where Peter Weatherson nodded it in - as easy as you like - 1-0 Morton.


When even James Grady managed to win a header there were thoughts that the management team could make an early change in an effort to stem the one way traffic, but when they did make a change it was enforced, Holmes pulling up suddenly when tracking back, and having to leave the field on a stretcher. On came Rory Loy to take up position on the right, with Bell moving in one. Almost immediately Bell’s teasing cross was defended at the expense of a corner - Glass’s inswinger being defended as was the subsequent outswinger as the Pars had a modicum of pressure. However it didn’t last, Gallacher made his seventh save of the game to thwart Jenkins as the half drew to a close.

Graeme Holmes carried off with a hamstring injury.

The travelling support were a bit miserable, despite a cheering dose of Morrissey over the PA system at half-time, and things soon went from bad to worse. After McAlister outpaced Thomson, Shields blocked the cross for a corner, from which Morton nearly scored, Bayne somehow clearing the ball whilst facing his own goal. The goal was only delayed by a few seconds, the second corner finding Greacen unmarked at the back stick and the Morton skipper skelped the ball home from 2 yards. 2-0 Morton.