Any lingering doubts the players or supporters had about how hard this season is going to be was made loud and clear at New Douglas Park this afternoon. Without doubt this will go down in the Pars recent history as yet again another big day when the Pars badly let the supporters down.

Ironically, this all took place on a plastic pitch which certainly contributed to the Pars downfall but it was by no means the real cause for the loss of three points. 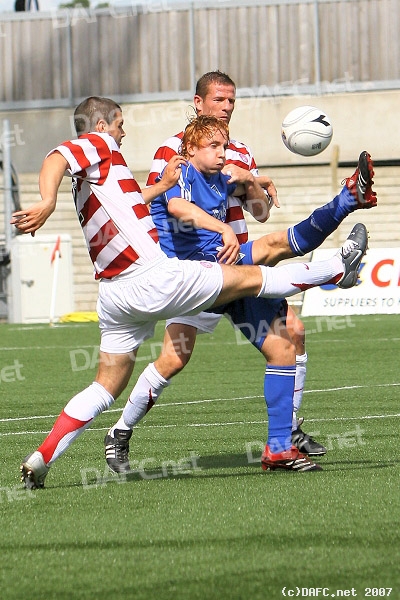 The Pars started with a very experienced line up with only Scott Thomson`s wise head missing. Roddy McKenzie has secured the goalkeeping position and started playing behind a back four of Shields, Wilson, McGuire and Muirhead. The midfield looked solid with Harper wide right,Simmons and Darren Young in the middle and Glass wide on the left. Tam "Ginger" McManus partnered Burchill in attack.

The Pars playing towards the 2,000 visiting fans the game got underway. Despite winning an early free kick which led to a corner it was the home side that drew first blood with a goal in only 5 minutes, Taylor scoring after McKenzie failed to hold the first effort after a good cross by Gilhaney.

McKenzie was forced into another save a minute later and then finally the Pars had an effort in 7 minutes as McManus shot across Halliwell`s goal just missing the far post.

Burchill had a great opportunity to equalise in 11 minutes when he was 6 yards out and managed to slice the ball over the bar. McKenzie then had a great save in 12 minutes from a downward header by Neil that he just tipped over. It was fairly end to end stuff at this stage but even this early it was clear the Pars were struggling to keep the ball down on the surface or finding the odd strange bounce difficult to cope with.

However, it seemed normal service was resumed for the Pars in 18 minutes with an equaliser by Burchill as a long ball from McKenzie caused panic in the Accies defence and Burchill latched onto the ball knocked it past Halliwell before slamming into the empty net. Life in the 1st Division maybe was not so bad after all! 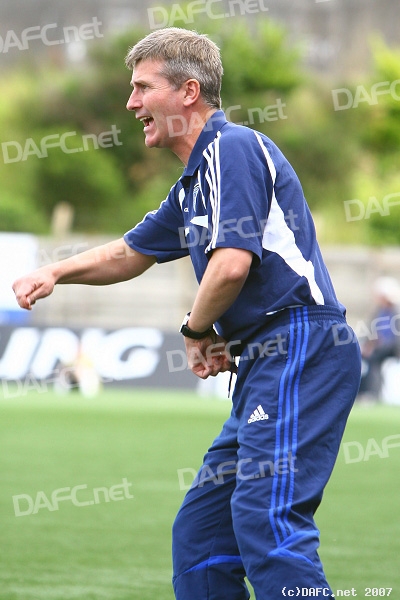 Tam McManus hit a good shot at the keeper and maybe should have done better as he had time to close in on Halliwell in 19 minutes. The windy conditions and high bouncing surface did not make this a great football occasion but Darren Young nearly caught a high Muirhead cross on the volley which was deflected for a corner which led to two more corners as the Pars stepped up the pressure.

Kevin Harper was having a quiet game on the wing with very little service but he tried a clever curling shot which went past the keepers` left hand post in 37 minutes.

Harper tried to cut in from the left bye line and was fouled and from the free kick it was cleared but Halliwell was flattened in the process by his own centre half.

Just on half time an appalling pass across the back line of the Pars defence by Harper set up Accies and the striker missed a great chance to make it 2-1. Half time 1-1.

The Pars had started the 1st half poorly but managed to do even worse at the start of the 2nd half as McGuire allowed his man to get the wrong side and he pulled him down for a penalty which also resulted in a red card. The red card was perhaps a bit harsh as Shields was in close proximity and possibly was the "real" last man but it was a stupid mistake by McGuire in the first instance. Offiong scored from the spot.

The Pars were now up against it with a man down and a goal behind. Offiong had a good chance to make it 3-1 but McKenzie saved. Darren Young picked up a yellow card in 54 minutes for a foul. Just after the hour mark Crawford and Owen Morrison replaced McManus and Simmons. 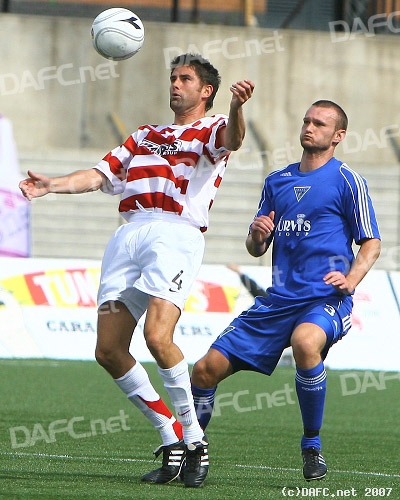 The closest the Pars came to an equaliser was in 68 minutes as Morrison set up Young but his shot flew past the post. There was virtually an action replay a minute later as Young got onto the end of a Harper cross.

There was a stramash near the half way line in 76 minutes as Young was crowded out by 4 defenders and fouled but for some reason Scott Wilson had to get involved running from his own half to get a piece of an Accies player only to get a needless yellow card as well. What a Dinger!