The points were shared in a match that never quite matched the brightness of the sun shining above Cnoc na Moine . Inverness score late in the first half, but a header from the substitute squared things.


Andy Kirk was back from his international sojourn to Prague and featured on the bench as Jim McIntyre kept faith with the same starting line up as in the first game of the Gaidhealtachd double header. Fleming was in goals, Ross and Woods were the full backs flanking Dowie and McGregor, and there were 5 in midfield: the deep-lying Burke and Holmes, Phinn further forward, Gibson right and Graham left. Graham Bayne led the line alone. Higgins, Bell (continuing his come-back from injury) Cardle and Paterson were the listed replacements. Inverness started with a 4-4-2. 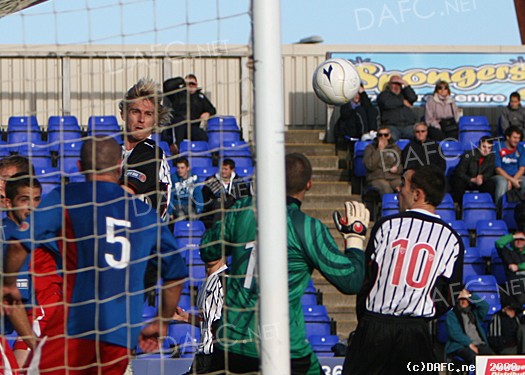 McGregor goes close with a header

A beautiful day in the Highland capital saw the Pars kick off attacking the Inverness Firth end, but the game on the park was dull to begin with as both sides were content to probe. An early Ross cross was too close to the keeper and although Proctor spun away from Dowie his touch was clumsy and the ball ran out for a goal kick. However the Pars suddenly created the game’s first chance in the 8th minute. Bayne won a header about 40 yards out and hit Gibson’s return first time into the area where Phinn had timed his run to perfection, but his header was tipped over the bar by the tumbling Esson,

Gibson had an effort from 35 yards that barely merited the description "shot" as it struggled over the bye-line before Inverness nearly scored in 19 minutes. With the ball bouncing about the Pars area Proctor was allowed time to swivel and shoot from 12 yards but Fleming parried and Woods was quickest to react and prodded the ball clear.

The mid-field was congested and rather like the national radio stations, the Pars players seemed to be on different wavelengths. Passes were misplaced and possession frequently surrendered, but slowly Alex Burke began to get to grips with conditions and Graham and Woods had some joy attacking down the left flank, winning a series of corners around the half hour mark. Gibson was the deliverer, and from one he sent in a deep cross to the back post where McGregor won the header, but the ball crept past the far post, its companion getting another punch in frustration - Neil will do himself a mischief one of these days… 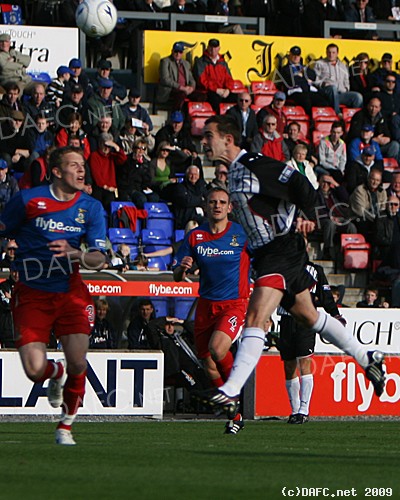 Graham was being well policed by Tokely and Bulvitis, but in 34 minutes he managed to beat 3 men, although his shot from the edge of the box was charged down as was Gibson’s subsequent effort. The Pars were looking marginally the likelier team, but chances were few and far between, and Bayne seemed a little caught by surprise when Woods centre reached him just before half time, and couldn’t get a clean connection. Then with only 13 seconds of the half remaining, the home team took the lead. The ball was passed to Golabek on the left who was given time to put in a deep cross beyond the far post. Foran’s leap was excellently timed and from his knock-back Proctor stuck out a boot to poke home off the near post 1-0 ICT and half time.

The Pars were first out after the half-time cuppa and Bayne in particular was keen to get underway, being ruled guilty of a false start by referee Muir who couldn’t believe the number 9 could move so quickly when he tackled Rooney within a second of the restart, and so the centre was retaken.

Caley Thistle got an early break when Burke’s tackle fell for Foran who found Cox inside. Phinn got something in the way of the shot causing the ball to spin wickedly, but past the far post with Fleming scrambling. Phinn had picked up a sore ankle in the first half and soon gave way to Cardle, who had a brief flirtation with Phinn’s position, before swapping with Graham and taking up station on the left. 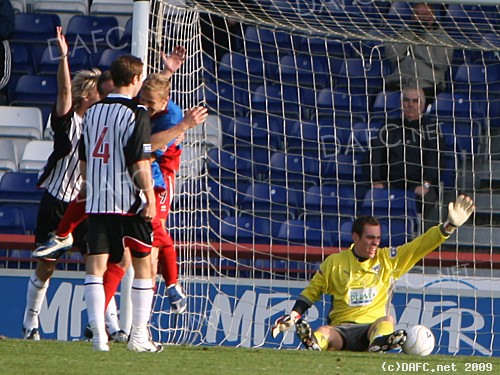 Defensive howlers have plagued the Pars of late, and they had to survive a shaky couple of minutes. McGregor’s pass-back wasn’t the best, but Fleming was quickly out to clear, before the blond centre-half had a bit of a Rio Ferdinand moment - plenty of time to clear (or do anything) but ending up losing possession, Ross getting back to concede a corner. Fleming claimed the resultant kick but in his haste to clear found his kick charged down. Fortunately the Pars emerged unscathed from these episodes, although still trailing.