This match summed up why Inverness will be champions, and Dunfermline will not – the home team looked strong and balanced, and when they needed it, produced enough of a performance with Adam Rooney and Richie Foran showing some SPL class with the goals.


The long drive up the A9, whilst spectacularly scenic, is not one I’d like to do too often, and with Caley Thistle all but arithmetically certain of promotion, it is one we’ll make twice fewer next season. Fewer roadworks than normal meant I arrived in plenty of time for a personal trip down memory lane, including a visit to my old primary school, where I recalled missing a last-minute chance in the trial match for the school football team. I used to wonder if I had scored would my career have panned out any differently (before rapidly concluding that, sadly, it would be delusional to think so). The official party may have been speculating similarly on their journey, casting their minds back to the season’s opening day when Lee Cox scored a 92 minute winner. Had he missed, could it all have been so different, with possibly the Pars in the driving seat instead? 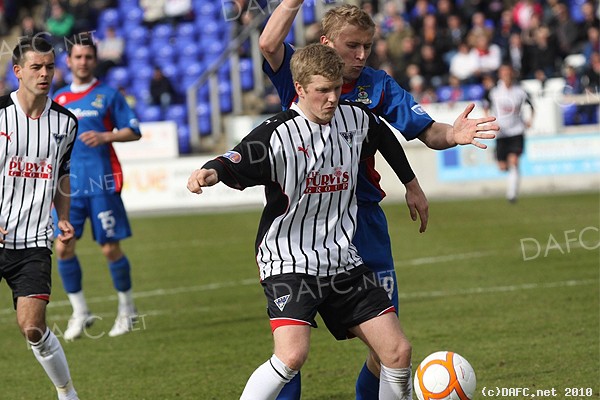 Seventeen fit players travelled giving Macca little choice with team selection. Paul Willis didn’t make the 16 and Campbell missed out from the eleven, but otherwise the Pars went with the same team as at Ayr, with Phinn coming in to start. To save you looking up last week’s report, that meant a line-up of: Smith, Woods, Dowie, Higgins and McCann; Gibson, Bell, Mason, Phinn and Graham; McDougall. Inverness had a couple of regulars missing, but able replacements in Bulvitis and McBain. Inverness took the kick-off, and had the advantage of the same stiff breeze that was causing speed restrictions on the neighbouring Kessock Bridge, playing toward the end housing the 170 or so travelling support. The players also needed a little time to come to terms with the conditions, keeper Smith coming to the edge of his box in the 4th minute to collect a long ball before rapidly having to find reverse gear when Foran got there first.


Caley Thistle had the better of the early play, but the Pars hit back on the break on 10 minutes. Hayes cut the ball back to Proctor, but the full-back’s cross was easily headed clear by Woods to Gibson, who made progress, passed to Phinn who in turn released Graham behind the defence, but the flag was already up by the time DG had squared and Bell had tapped home.

Dowie made a good interception 3 minutes later, and headed for the box after laying the ball wide to Gibson, but the winger’s cross curled straight into Esson’s gloves. Despite this, Caley Thistle continued to dominate, a 23rd minute corner leading to chances for both Odhiambo and Rooney before Smith comfortably held Foran’s header.


There was some controversy in 26 minutes. After Gibson had been penalised for foot-up on Golabek, the Pars regained possession and a quick break saw Gibson pick out Phinn, who controlled the ball before lobbing Esson, the ball finishing in the net off the underside of the bar, but after some confusion, it became clear that hand-ball had been given against Phinn, and not only was the goal not given, but the midfielder was booked.


Other than that the Pars hardly threatened at all in the first half – McCann got decent space on a couple of occasions to cross, but Esson grabbed both with ease, and a late Bell header nearly set up McDougall with a shooting chance but Golabek nipped the ball off his toe and got clattered instead, McDougall coming off second best. The home team looked the more dangerous, Rooney being a handful and both Foran and Hayes causing problems, the latter twisting and turning McCann right on half-time to get a cross in which Mason had no compunction about turning behind for the game’s fourth corner. However, no goals at the break. 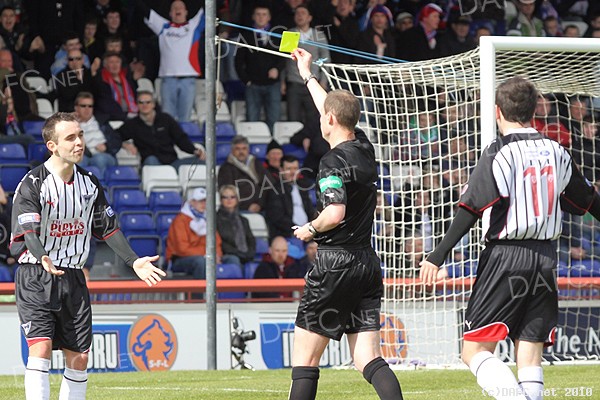 McDougall was given a run-out at half time but didn’t pass the test so Campbell took over as lone striker, and the Pars soon had another injury concern when Woods clashed heads with Foran, the ball being prodded behind from a corner with both players prone. Another corner was conceded, from which Smith was forced into a very good save from Bulvitis’s header, before denying Odhiambo’s follow up whilst still on the ground.

After Phinn had managed a shot on target after Graham had beaten a couple of men, Smith was again to the rescue, denying Hayes with his legs after a horror Woods cross-field pass had given the ball straight to the Inverness player, whose momentum easily took him past Higgins.