Marco was on the bench as substitute keeper on Saturday for the cup semi final, now he being given a final swan song later this week!

Pars fans will now be given the opportunity to wish Marco all the best as he plays his final game for DAFC later this week. Jimmy Calderwood has chosed to play Marco from the start as Dunfermline face three league fixtures in just two days, Derek Stillie may well be glad of the rest ahead of the Inverness replay!

Marco signed for DAFC back in May 2000 from Dutch club Go Ahead Eagles.

Jimmy Calderwood`s first campaign in the SPL saw Ruitenbeek firmly establish himself as the clubs new number one.

Season 2000/01 saw Ruitenbeek keep goal in all but two of Dunfermline`s games. 12 shut outs in 36 league games (a club record at the time) as well as 3 in 7 cup matches was an excellent start to his Dunfermline career.

Season 2001/02 returned 11 clean sheets in just 29 league games as well as a solitary appearance in the Scottish Cup.

Derek Stillie arrived from Wigan Athletic in the summer of 2002 as competition for the goalkeeper`s jersey.

Marco remained first choice however and it was not until a nasty injury put him out of action that he lost his place.

17 league games returned only one clean sheet, with a further shut out in the two Scottish Cup matches he played in.

A bad injury in November 2002 saw Derek Stillie claim the starting place and Marco struggled to get it back as Stillie took his chance.

His last game at East End Park was a 4-1 defeat to Celtic the week before.

All in all, Marco has made 92 starting appearances for Dunfermline Athletic with 28 of them resulting in clean sheets. Number 93 would be ideally met with a 29th shut out next weekend!

Marco will leave the club with everyone`s best wishes, hopefully it will not be too long before he returns as a guest. 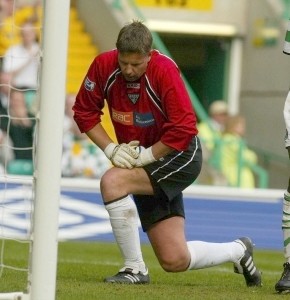