Cappielow has not proved a happy hunting ground of late, so any victory is welcome. The Pars worked hard in a close game but got the breaks at the right times with Cardle scoring a super goal to wrap up the points.

From Paris to the Pars…one day you’re strolling down the Champs-Élysées with views of the Arc de Triomphe and the Eiffel Tower, looking forward to your confit de canard and crème brûlée; the next you’re wondering what you’re doing sitting in 7 miles of slow moving traffic on the M8 before hurriedly cramming down a burger, tottie scone and a Mars bar in sight of unused cranes in the James Watt dock. Ninety minutes and a couple of goals later and you’re glad you made the effort - that’s following the Pars for you.

So much for Macca having a full squad from which to choose - Stephen Glass had a hip problem and couldn’t make it so Austin McCann deputised at left back in an otherwise unchanged starting eleven. Andy Dowie and Joe Cardle made it to the bench, so there was no room for Ross, Holmes or Muirhead.

Graham Bayne took the captain’s armband, and partnered Andy Kirk up front, Burke and Bell were in the middle with David Graham wide left and Willie Gibson wide right and we had a back four of Woods, McGregor, Higgins and McCann. Greg Fleming was between the sticks.


The match kicked off with the Pars, playing in their all yellow strip, defending the Sinclair Street end and shooting into a stiff westerly breeze. Both sides struggled to get the ball under control, and it took 5 minutes for the first chance to present itself, but Masterton’s effort from the edge of the box was well wide. The home team had the better of the early exchanges, although Greacen was booked when taking down Graham on the touchline - the Pars man being too quick for him after being set up by Kirk. 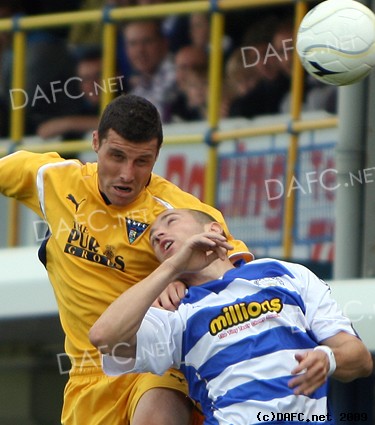 Greacen then slipped under more pressure from Graham but Bell couldn’t get his shot away when the ball was centred before Fleming made the game’s first save, quite comfortably from Weatherson. However in 20 minutes the Pars took the lead, slightly against the run of play. Willie Gibson had tracked back and picked up a loose ball in the middle of his own half. He made progress down the right before a 1-2 with Woods sent the Pars right-back clear on the over-lap. Calum reached the bye-line and chipped the ball into the six yard box where Kirk rose to head the ball in at the bottom of the keeper’s right hand post. 1-0 Pars, not a bad goal, and better to come.

Willie Collum flourished another card, this to Chris Higgins when he seemed to be caught napping after a poor clearance and hauled down Weatherson 30 yards out, but the wall did its job before at the other end Graham again got the better of McGuffie but his shot from a tight angle was blocked. 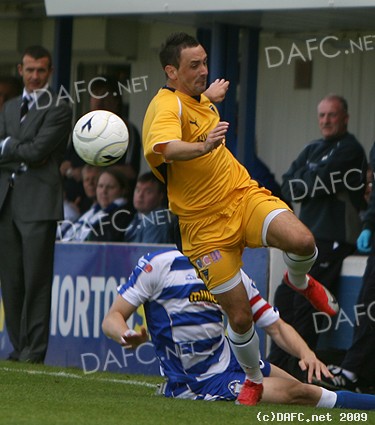 Fleming came to the Pars rescue in 31 minutes when he blocked a Weatherson shot and Grady completely mistimed a header 2 minutes later when well placed. The diminutive striker was clearly getting frustrated and lunged in on Graham giving away a free-kick on the touchline which McCann took quickly, sending down the line to Graham. Again the wide-player outpaced the defence and his outside of the foot flick was met by Higgins who headed over when perhaps he should have done better.

The Pars were finishing on top and nearly doubled their lead 3 minutes from the break. Bayne held off referee Collum before playing a beautiful reverse ball down the line to Graham. Again David outpaced the defence, and headed for the byeline. Kirk’s movement, going first forward then stepping back to the edge of the six-yard box, created some space and he met Graham’s cut-back first time, but his shot crashed off the base off the post and was cleared. Not far though, and when Gibson sent in a deep cross, the home team’s debutant keeper dropped the ball under pressure from Kirk ,and the ball rolled into the unguarded net. No goal given though - Collum blowing for a foul - and protests were muted. 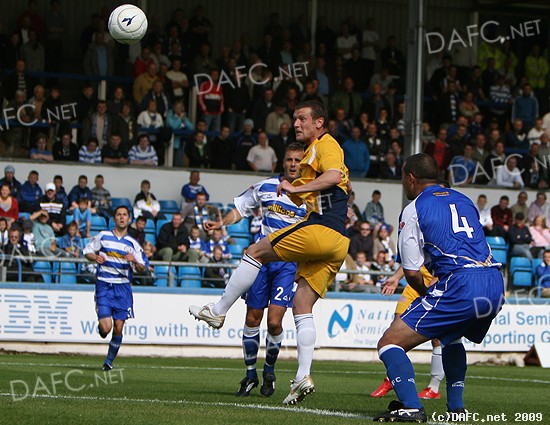 Unmarked, Kirk scores with a header

With Graham taking a knock early in the second half the Pars forward threat stuttered a little, and Fleming did well with a Weatherson shot in 51 minutes, not so much by stopping the shot, but by ensuring he beat the ball beyond the in-rushing McAllister. The Pars meantime had a couple of half-chances, Gibson shooting past from distance before the same player combined with Kirk to set up Bayne at the edge of the box but the big striker couldn’t keep the ball down.