The Pars fail to put further pressure on St Mirren after a disappointing display at Motherwell.

The injury and suspension probles were still very much to the fore as Stephen Kenny brought in Greg Shields, Scott Muirhead and Sol Bamba. Surprisingly, Greg Ross was dropped no doubt the manager was trying to strengthen his defensive line up particularly as the sometimes rash Bamba was being brought into centre back.

Dorus De Vries was in goals with Shields at right back, Bamba and McGuire in the centre and Scott Morrison on the left. Stephen Glass once again partnered Gary Mason in the midfield flanked by Hammill on the right and Muirhead on the left. O`Brien partnered McIntyre up front.

Motherwell`s rather physical approach was started as early as the 1st minutes with Bamba and De Vries taken out in a single move. It was the home side that started better moving the ball around in the first 5 minutes. De Vries parried a shot past for a corner in 5 minutes.

It was not until 10 minutes that the Pars had their first shot from McIntyre which he blasted well over the bar. A minute later and O`Brien made a direct run at the middle of the Motherwell defence end was chopped down by Craigan. Hammill hit the free klck over. 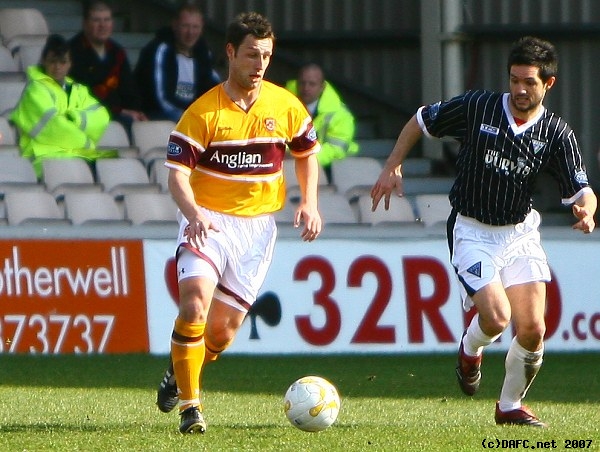 McBride hit a volley high and wide in 14 minutes. In 18 minutes the Pars put together a good spell with Hammill getting over a good cross and as the Pars kept possession the clear cut shooting chance would not present itself until McIntyre hit the ball straight at the keeper.

Greg Shields was looking short of match practice and was left for dead in 25 minutes and but Motherwell shoot over. 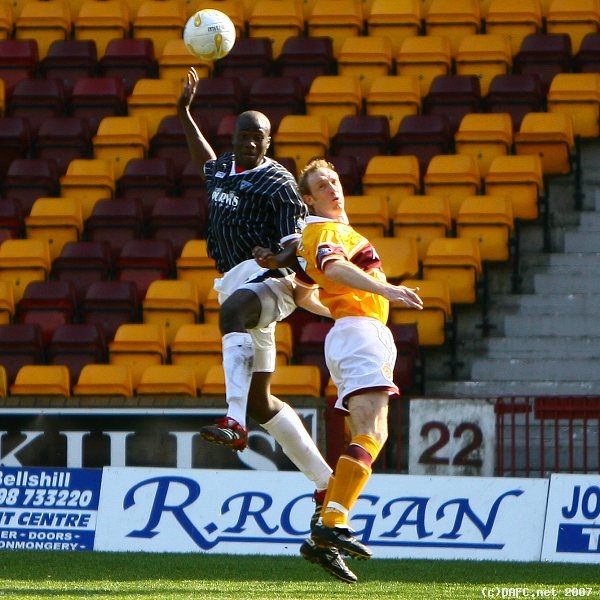 The Pars were playing some good stuff but without creating the finishing touch. Bamba was playing a solid game at centre back and Glass, Muirhead and O`Brien were linking well on the left. A Hammill cross in 29 minutes just eluded McIntyre. Craigan made yet another wild assault this time on O`Brien and still no yellow card from a very fussy and inconsistent referee, Stephen McDonald, who had shown signs early in the game he was losing the plot. 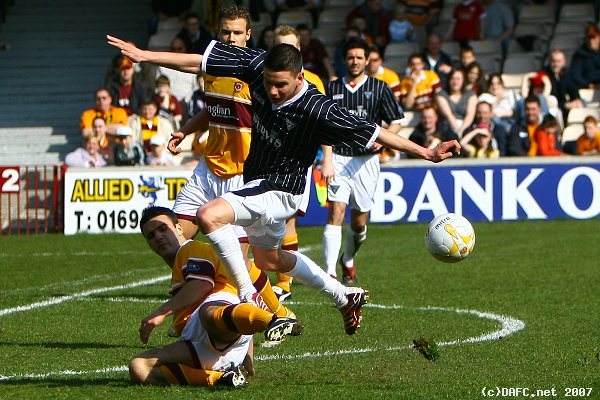 Bamba did some very good defensive work in 42 minutes as Motherwell looked for a goal before half time. Hammill put over a free kick in 43 minutes which Muirhead headed over. Half time 0-0. 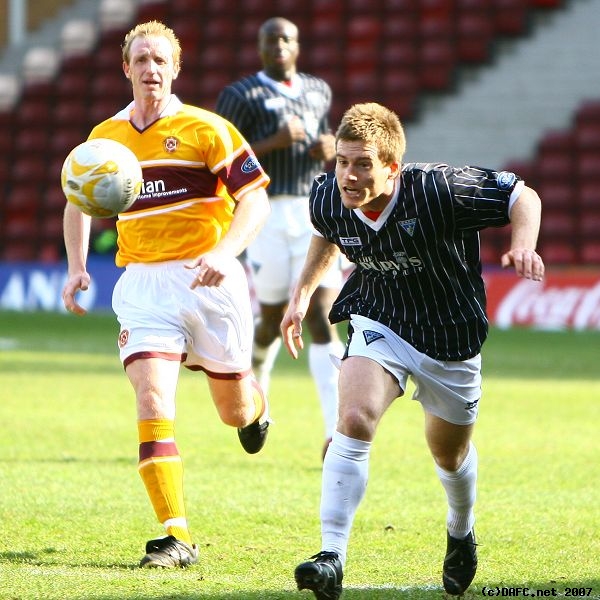 Shields headed a ball out for a corner when there seemed to be time to direct the header back to the keeper if there was a shout. O`Brien was fouled again 20 yards out but the free kick was wasted.

Then disaster for the Pars as Scott McDonald ran into the Pars box, Phil McGuire challenged and McDonald with a delayed reaction tumbled to the deck, it did not look like a penalty but a blatant dive but it was still shocking to realise the referee was pointing to the spot. McDonald scored. Paterson had a good chance to score a minute later as he pulled his shot wide as the Pars seemed to suffer a slump after the goal.

De Vries made another good save in 55 minutes and then Craigan got his long overdue yellow card in 56 minutes.

McIntyre had a good chance in 57 minutes from a free kick but his header was too weak and at the keeper. Shields got a deserved yellow in 58 minutes. Muirhead was replaced by Burchill and as th ePars tried to settle they lost a second goal the effectively killed the game. Bamba missed a header and McDonald was right through and easily shot past De Vries. A tangible air of depression fell over the large Pars following in the main stand as the 1st Division beckoned. 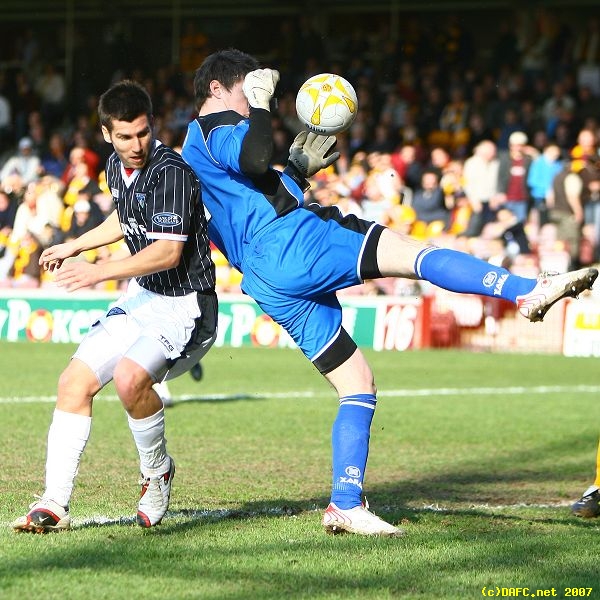 In 64 minutes the Pars fans were in full voice again as McDonald again tumbled in the Pars area with the referee rightly waving play on, but no yellow card for play acting.

McDonald did eventually get a yellow for some verbals with the ref in 69 minutes. A couple of minutes later Murphy was also carded for yet another foul on O`Brien.