Very much a game of two halves as the Pars were shockingly inept in the first and only started to play in the second. Two superb goals from Darren Young and Stevie Crawford did the business and another sterling performance by the defence sent St Mirren home with no points.

Stevie Crawford returned to the side after being cup-tied during the week with Calum Woods also returning from injury. The Pars lined up in a 4:4:2 formation with De Vries in goal. Greg Shields was a right back with Bamba and Wilson in the centre and Woods at left back. The four man midfield had Ross on the right Young and Mason in the middle and Morrison on the left. Crawford and Hamilton were leading the attack.

In almost an action replay of the last home league match against Killie the Pars were very slow to start. Even in those early moments the Pars were having difficulty keeping possession and playing the ball on the ground. Crawford had a shot in 9 minutes which resulted in a big appeal for handball as the ball hit a defender with referee Craig MacKay waving play on. It was just a minute later when Sutton hit a low strike past De Vries after Shields and Bamba failed to clear from the edge of the Pars 18 yard area.

Jim Hamilton was getting very little service and was not winning much in the air until 16 minutes when he headed a Morrison cross from the left just wide. Greg Ross did well to battle his way along the Buddies bye line before cutting a pass back which Hamilton could not connect with. Broadfoot hit a free kick wide for St Mirren in 26 minutes.

The game was at its lowest depths in the 20 minutes before half time with neither side passing the ball well but with St Mirren closing down better and looking the more likely to score although came nowhere near to doing so. The Pars midfield was completely missing with Mason and Young the biggest culprits. The Pars were left with no options but for the defence to lump it forward to Hamilton and Crawford with little success and no-one was winning the second ball. Former Par Billy Mehmet came on in 44 minutes to replace injured Kean. The Pars went off at half time to a resounding and deserved chorus of boos from the support. Half time 0-1.

There have been murmurings from the support about Leishman’s ability or perhaps inability, to motivate players but whoever was responsible for the half time lecture saw the Pars come out with a much more spirited effort in the second half starting with a cracking goal scored by Darren Young inside the first minute. A ball found its way to Darren from the right and he strode on to lash the ball into the net from 22 yards out. 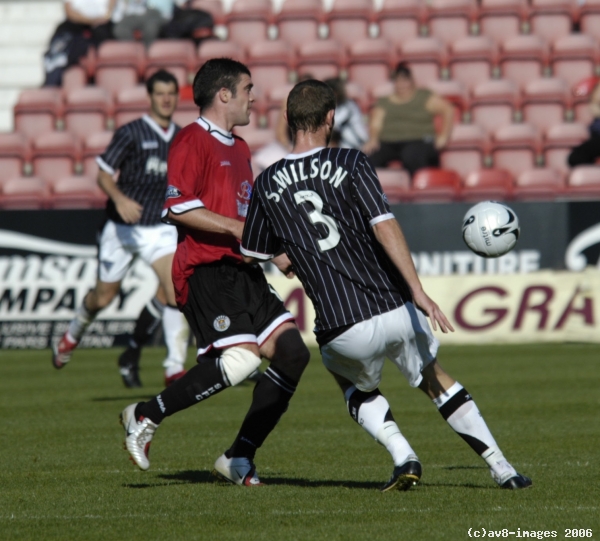 There was much more spirit about the Pars play and Morrison linked well with Crawford in 49 minutes to set up Ross with a shot which he pulled wide. A minute later Crawford had a great chance when a looping ball fell from behind him and over his head but his connection with the ball was sclaffed and the chance went a begging. Jim Hamilton had two good chances in 52 and 56 minutes with the first he lashed the ball from a tight angle back across the goal but over the bar. The second was a low shot when in good position about 30 yards out but he did not make a clean strike and the keeper easily saved.

Andy Millen was finding Morrison and Crawford a handful and when he went down making a challenge he handled the ball thinking he was getting a free kick which was actually given to the Pars for his deliberate handball but no yellow card.