Pars United take latest step in their bid to purchase Dunfermline Athletic Football Club from administration with a campaign to raise £500,000. 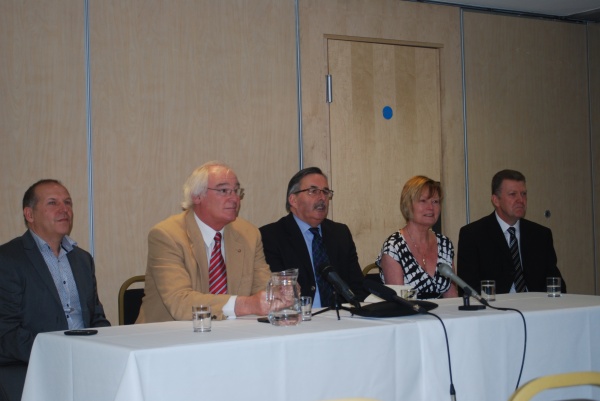 22nd May 2013 Pars United launch £500K campaign to buy Dunfermline Athletic and take the club out of administration. www.buythepars.org

The aim of ‘BuyThePars’ is to purchase Dunfermline Athletic Football Club and put control firmly in the hands of those it means most to - the supporters.

The anticipated target that the world wide Pars Family requires to raise before the end of July is a minimum of £500,000. All capital raised will be held in secure trust accounts, to allow the money to be repaid to those pledging support, if a CVA is not successful.

Shares are available at a minimum price of £100 and individual fans can invest up to a maximum of £5000. For further information and to purchase shares in the Pars Supporters Trust visit www.buythepars.org.

Anyone wishing to donate more than £5,000, which is the minimum level to become a Pars Patron, should contact parstrust@yahoo.co.uk.

Pars supporters gathered at Dunfermline’s Alhambra Theatre on the 22nd May 2013 to find out more about the ‘BuyThePars’ campaign.

Bob Garmory from Pars United, who is leading the initiative, said: "Our club has been through a traumatic period in recent months and throughout that time many fans realised that there was a distinct possibility of there not being a Dunfermline Athletic as we know it. We now have a very real chance, through the ‘BuyThePars’ campaign, to take the club into community ownership.

“We are acutely aware that Dunfermline Athletic fans have already been extremely generous and without question they saved the club from moving straight into liquidation. We are now moving into a new phase, from saving the Pars to buying the Pars, so we need everyone to make a final push and safeguard our club for the community and for new generations of Pars fans.

“There are Pars fans in every corner of the world and the ‘BuyThePars’ initiative will let them own a piece of the club they love and secure its future. We firmly believe this is an offer that will be of interest for the whole community and not just those who come week in week out. This is about protecting a valuable asset that represents the town and is as important historically as Andrew Carnegie or the Abbey. We believe with community ownership we can continue to add to that history with a new beginning.”

Bruce Watson of Big Country, who penned a one off version of their hit single “Chance” for the ‘BuyThePars’ campaign said: “Dunfermline Athletic ties communities and families together and for there not to be a football club playing at East End Park is unthinkable. We’ve taken the Pars name around the world and we want to continue doing that so this is a Chance for Pars fans to own a piece of the club that we all love.”

Paul Goodwin, Head of Supporters Direct Scotland, said: “In recent months the resilience shown by Dunfermline fans to save their club has been fantastic. They are now moving into an exciting phase where they want to become the latest community owned football club in the UK. Fan and community ownership schemes are not unheard of with five in Scotland already and very recently down south we have seen Portsmouth becoming a fan owned club. Europe also has some very high profile clubs such as - Benfica, Borussia Dortmund and Barcelona - operating under this structure and there are many more clubs considering community ownership

“Supporters Direct Scotland has been working with the Pars Supporters Trust for some time now to help them develop its ‘BuyThePars’ campaign, a vehicle for its fans to buy into their club and hopefully now they can achieve their goal of owning the club they love.”

Jim Jeffries, Manager of Dunfermline Athletic said: “The fans’ backing for the club and the team in recent months has been nothing short of outstanding. Without them the club would not have survived and that is why I’m right behind their efforts to raise the money needed to buy the club and place it in the hands of the fans themselves.”

Jim Leishman, Provost of Fife and Honorary Director of Dunfermline Athletic added: “The last few months have been the most difficult in the club’s history. However the fans and the community stepped up and saved the club and now we’ve moved on to taking the next important step for the fans and the community to own the club. I’d urge every Pars fan to back the campaign, be it individual supporters or the business community who have been great backers of the club in the past.”

A ‘Pars Patron’ is any Pars Supporter who is in a position to donate more than £5,000 directly to Pars United, which will purchase shares directly in DAFC