Well well what a fun trip. After much singing on the bus going up and a few pints on the way, we finally got to Stornoway!


On first impressions it looked ok if a little boring (we were soon to find that out at first hand!!) We settled down in our digs with Justin aka Jesus and set off to find our ‘local’ for the week.

The Star was the first port of call but even though 10 folk seemed to be in there even the latest technology couldnae find a pulse, needless to say we left with half a watered down pint left in the glass. The Lewis bar was next and even though it was the most expensive pints and its dodgy pool table dubbed Roberto Carlos we like this one the most (nothing to do with the stunning bar maids!!!).

The following day after much deliberation (Aye Right!!) we decided to see the standing stones. Woo Hoo. To cut a long story short that took 3hrs of our day. A walk about the town to find some land marks (Chippy, Bakers, Pubs, Fitba park and Night Club). We headed off to scout for some more pars fans off the ferry. We turned a corner to be confronted by 3 lads wearing the colours.

Stoker, Bob and Ian Shaw aka BoAPar who were sharing the same digs as me and ginger. After guiding these lost lads back to the digs we split up. Ginger and I needing some ‘wife-beater’ and the others needed a chippy. We meet up later in The Crown but after that most of the night is a blur……..Only a few things come to mind:

1. The bar maid (Morag) taking the utter *** out of us Fifers!
2. The bevvy flowing freely
3. Chatting up a engaged bar maid (Carola)
4. Stottering up some street singing Pars songs
5. The Whalers Rest – Losing Ginger
6. Next morning

To our surprise the following morning apart from the room being ripe (Thanks Stoker). My partner in crime had a black eye, which is still being sported today!! Turns out that he was in a fight with the rim of a toilet. Needless to say a slow morning was on the cards as well as losing the two victim to the “Chunder Challenge”, Mister “I got three kisses” Ginger and Mister Ian Shaw (“,). After the munchie squad had got the rounds of juice and food in a wee tournament at the putting green was called upon!!

After successful first round for my fine self, the second was cut short after I found out that the toilet close by had been closed for 5 YEARS!! (That must have been some dump) A sharp exit to the CO-OP was needed. A game of Fitba was next on the menu. All started well until Stoker slipped and looked like he had let something slip oot!! By the end of twosey the sweat was dripping off all of us and Bob seemed to pass out on the floor but he was ok after a fag. I’m sure the reek of Stella off us was pungent. We finally got home after waiting for and era to pass in the CO-OP and hoping death was sooner rather than later. After a few late “morningers” back at the digs, Mr Shaw had waited long enough for some tucker and announced that he was going through to cook his microwave meal. I announced that the only fair way was to play cards for the order of use for the single microwave. The order ended Ginger, Stoker, Myself and BoAPar (Bob was excluded for being engaged elsewhere). Sorry BoAPar for ma smart-arsed idea. After some fine tucker it was off to the pub again for some more bevvy and a shot on Roberto. A short walk to the game with a chippy and meeting up with IKTS and Skerla_JW.

The game was fun with a few rough tackles fae the Lewis lads and Noel Hunt being a cheeky wee bassa. One of the finer moments was a screamer fae Andre K before sadly pulling his calf. Noels magic forward roll with the ball between his legs and also nearly ending up in the stand with his new found friends after a monster slid tackle. One of the funniest moments at the game was the concern of Gorgie Porgie sweating, it was worse than us a playing fitba after the night before.

PS If any Lewis people are reading this can McGroaty please have his ankle back? Last seen in the penalty box Call 01383-That-was-a-shocker-of-a-tackle. 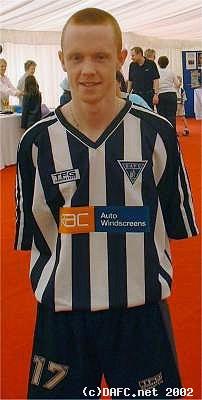 Our first pub we hit was The Royal (Where the players were staying). Sadly the players could not chat for long because they had an early curfew, but JC and JY where happy to talk. Time passed fast in there as JC bought us lads a round (Cheers big man) but it was soon time to move on. Needless to say the pubs took another battering that night. Although we had our only bit of agro aff a wee dodgy wifie. First of all she felt up Bob, Stoker and Ginger, saying that Stokes had a very girly arse and then after BoAPar commenting on her badge (A ‘tic effort) and a wee dig fae me she decided to chuck a table into ma mid-drift. LOL. No the best idea because I had decided to hit the chang (Cider) before closing time. Also that night we lost another victim to the “Chunder Challenge”, Bob had a TDI (˝ cider, ˝ lager, shot of blackcurrant and a double vodka) he said his spew was “chunky purple”. Nice!! This left Stoker and me in the game.

Another day and another ripe bed room (Honestly Stokes you should get that seen to). Todays brekkie was an attack on the worlds slowest toaster, it was so lady like in the way it acted; cold and slow just like some of the ladies Ginger was trying to chat up. Cannae mind what happened during the day apart from the ultimate hooligan activity, we hit the TEA ROOM. Stoker had the hardcore soup while the rest of us had the toasties. Yes we know!! We are hardcore pars fans, the cheeky cheeky in there also helped make up our minds to go there. As you can see im finding this hard to write. Anyone ken what we did on Friday?? Must have been in the pub.

On the way to the game it was cut short when I blagged a ride in the back of a polis van to the match (Good pictures). This game was a wee bit more worrying when the select took the lead. It must have been their mind games that unsettled the pars by turned up 10 minutes late. What was more worrying about the game was that it was like a scene out of Gladiator. Every time a pars lad got halved an almighty cheer went up. Anyway another tidy win and Big Daddy Brew showing his Pele touches of class.

Our final night was a good laugh especially in “Heb” aka H.I.V. The entire pars squad turned up apart from Crawford and Dair (one other I think but I cannae mind). With lots of “wife-beater” and banter with the players. The players did great PR for the club that night and if anyone from EEP is reading this, the late players were doing the club proud by talking to the locals. (Cheers for the drink Daddy Brew) The group was shocked as a local lassie latched herself on to BoAPar. The irony of the matter was that out of an island packed full of cheeky cheeky it was the beast of the Minch that attacked him. Lewis is THE untapped cheeky hidey-hole, possibly where the sunshine Sheila’s stay through-out Britain. After a wee but jigging we wandered the streets for some bevvy or an invite to a party. Ginger tried his best to get us to a lassies hoose by saying.

Ginger – “How you getting home?”

Ginger – “I thought angels could fly”

Pure genius ma man!! She must have been fridged. So to no avail we decided to go to The Royal where we chatted away to the pars players that hung oot the windows for about an hour until the polis wifie telt us to go home (She was a monster). When we finally got home about 4ish, BoAPar and Ginger fell asleep first so the rest of us decided to use BoAPar as a canvas, he was dually attacked with toothpaste, shower gel, toilet roll and a pen. Another good picture Lol.

Our final day on Lewis was slow and when we finally got up the room smelling its worst EVER!! We went round the island to say our goodbyes and for myself and Stokes to start the drinking on our weakened stomachs. The ferry was at 1400hrs and Ginger and myself finally got home to Dunfermline at 2201hrs. Stokes and me decided to call it a draw in the “Chunder Challenge” even though I was 2 pints up on him. Lewis is probably an exciting place if you have a car but for us it seemed a tad mundane.

I would like to thank Morag and Jimmy for there service in the Lewis Bar and also to Bob, Stokes and BoAPar for the company!!

And to who ever eat my garlic bread – I WILL HUNT YOU DOON!!

(Sorry Noel for the pinch but it was irresistible. Tight touche) 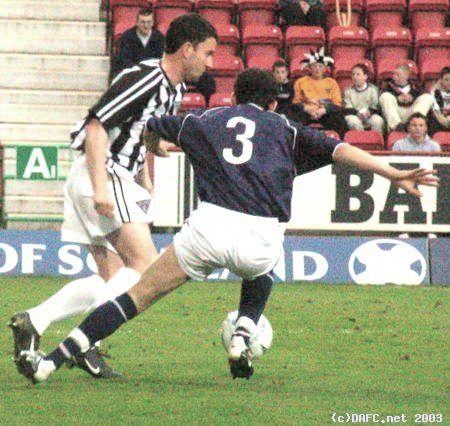 Dair scored in both games