A great game of football with the Pars just about deserving to add to their impressive away record. There’s nothing like a late winner to send you home with renewed heart - more games like this and football is in danger of being classified as entertainment.

With Bayne suspended, changes were inevitable and Kirk came back in to lead the line, with a first start for Holmes. There was a surprise inclusion for Greg Ross at right back and the Pars took the field with an unusual 4-1-4-1 formation: Gallacher in goals, Ross, Shields, Wilson (pictured right) and McCann along the back, a midfield 5 of Bell, Holmes, Thomson, Phinn and Graham, and Kirk on his tod up front. On the bench McIntyre had the attacking options of Loy and Mole alongside Muirhead and Reidford; after Kevin Harper made a fleeting appearance during the warm up he was replaced by substitute substitute Alex Burke. Thistle, on a good run that has seen them rise to second in the table, went with one change, Chaplain coming in for Donnelly, and, ominously for the Pars, included the prolific, but not fully fit Liam Buchanan. 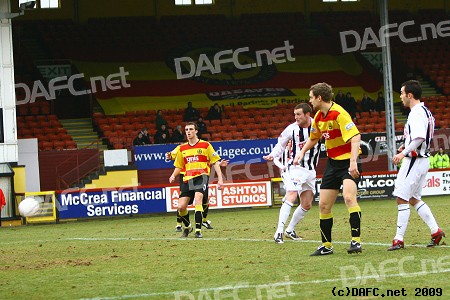 As you would expect The Jags adapted faster to the bumpy turf, winning a corner in the first minute and going close in the 8th minute with a Twaddle effort from 25 yards which dipped viciously, but just too late. A minute later however, the home team had the lead. Gallacher collect a deflected cross from the left, but the ball was already over the bye-line. The corner was delivered into the middle, Twaddle got a touch and Archibald at the back post turned the ball goalwards to find Buchanan, poacher par excellence, in the right place to knock the ball over the line (pictured above). A good goal to score, but a bad goal to lose. One nil Thistle.

The Pars hit back quickly - following a neat interchange with Kirk and Phinn, Graham got free on the left, and picked out Bell arriving at the back post and the midfielder stuck the ball into the roof of the net. 1-1. 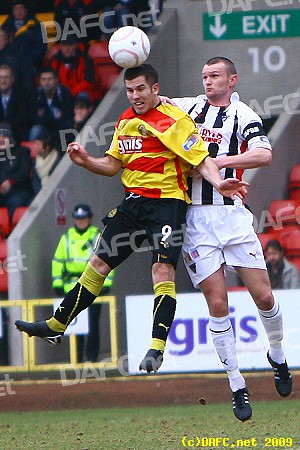 A minute later the Pars had a corner, and after Holmes had driven the ball in, Shields won the second header but Jonny Tuffey in the home goal beat the ball away.

Referee Willie Collum was trying to let the game flow wherever possible with the first free-kick not being awarded until the 21st minute when Kirk was penalised; shortly afterwards Thistle made an enforced change with McKinley replacing Storey.

Thistle were continuing to cause problems - Shields slid in to clear across his own keeper at the expense of a corner in 27 minutes and Ross got no distance with successive attempts to clear danger in 29 minutes before Nipper eventually got the ball away, Phinn drawing a foul in the middle of the park.

From this innocuous situation the Pars took the lead. Wilson took the free-kick square to Shields, who gave it back; Wilson played it back to Shields, who, under pressure from the advancing Thistle forwards, played a brilliant/lucky ball down the inside right channel, picking out Ross in yards of space. Greg’s cross seemed too deep, but Holmes collected, turned his man and crossed to Kirk, 6 yards out. All it needed was a simple downward header, and the Northern Irishman duly converted (pictured above and below)to go into double figures for the league season. 2-1 Pars.

Again the advantage only lasted 4 minutes. Graham picked up a yellow card for a late tackle and the free-kick from the deep was again flicked onto the back post where this time Doolan got enough on the ball for it to go in off the far post. 2 each. 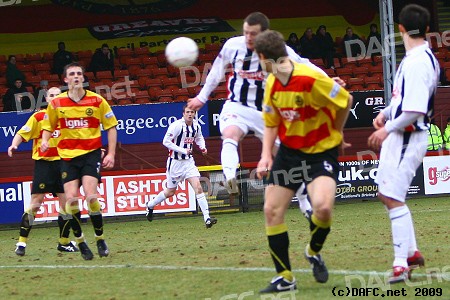 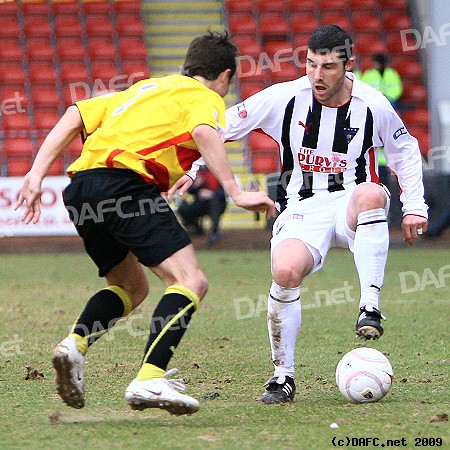 Maxwell replaced Twaddle, who had fallen awkwardly at the edge of the pitch just before the break, as the Jags restarted defending the Ruchill end in which the visiting support was situated. This was still anyone’s game, with the lively Buchanan causing McCann all sorts of problems and the pressure of keeping the rearguard together seemed to be getting to Wilson when he picked up a booking for remonstrating with Mr Collum over some perceived injustice - the first such booking in weeks and weeks for the newly placid skipper.