There was to be no repeat of last year’s cup heroics as the Pars crashed out of the cup at a damp Firhill; the first time ever that the men from Maryhill had come out on top in a Scottish Cup tie between the two clubs. After having much the better of the first half, Scott Wilson headed the Pars into an early second-half lead, only for Liam Buchanan to complete a double late on to give the home side the excitement of a 5th round trip to Livi.

The Pars side showed four changes from the eleven which had lost narrowly to St Johnstone last time out. Jim MacIntyre started for the first time under his management in the troublesome left midfield berth, there were welcome returns for Stephen Glass and Calum Woods and Kevin Harper was promoted from the bench. There were no places in the 16 for Harris, Murphy (whom we may have seen the last of in a Pars shirt), Young and Ross.

Mindful of the controversy over the postponement of the match as originally scheduled, the pitch had been subject to a morning inspection, and referee Scott MacDonald had been in situ at Firhill since 3 p.m to keep his weather eye on conditions. As it happened, the pitch held up better than expected given the fine drizzle that fell for most of the game, although there were a few slips from the players and the occasional odd bounce. 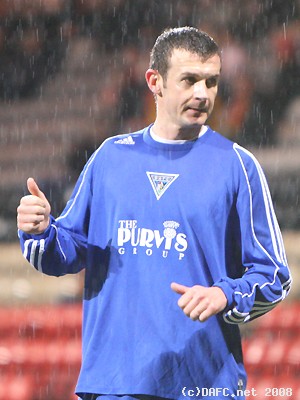 Thumbs up from McIntyre

As the Pars kicked off defending the end occupied by the travelling support it was clear that the usual 4-4-2 formation would be adopted with Gallacher in goals, a back four of the 3 Scotts (Morrison, Thomson and Wilson) with Calum Woods at right back, a midfield of MacIntyre, Glass, Simmons and Harper on the right wing, and the now usual front pairing of Hamilton and Burchill. Dunfermline created their first chance in only 3 minutes as Hamilton fed Harper on the right and his early cross appeared to be miskicked by Burchill and the ball was bundled behind for a corner. Next to show was Morrison whose neat side-step created space for a cross but Tuffey did well to claim.

Whether Harper is an avid reader of the DAFC.net forums is unclear but he was certainly heeding the advice given as he was getting the ball into the danger areas much more quickly. However the best chance came in 14 minutes as the referee played advantage after a shove on Hamilton and Burchill was played in, but after taking the ball past the defender his right foot shot was well blocked by the keeper. 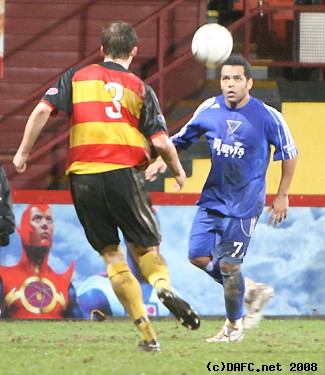 The Pars’ play had more variety than that of their last visit to Maryhill - as well as the pace of Burchill they were using the options of the aerial threat of MacIntyre, the trickery of Harper and the hold up play of Hamilton. However, clear cut chances were elusive. After 34 minutes Hamilton nearly wriggled his way through the Jag’s rearguard and a minute later MacIntyre eschewed the overlap of Morrison electing instead to swing the ball inside to Burchill whose first time lay off was met on the volley by Glass. It would have been a fantastic goal, but the midfielder’s shot slewed well wide.

Although Partick had taken 20 minutes for their first effort at goal, a long range effort from Chaplain which was well over, the home side finished the half much better and the Jags fans in the Jackie Husband stand began to make themselves heard . Firstly MacIntyre had to look lively to defend on the edge of his 6 yard box after Partick had taken advantage of Calum Woods going to ground and there was nearly double trouble for the Athletic on the stroke of half-time. Simmons looked to be nudged as he attempted a clearance and Woods mistimed a desperate tackle in an attempt to retrieve the situation giving away a free kick 25 yards out in a central position, and getting a yellow card after prolonged treatment. However the Pars defence held firm and the half finished goal-less.