Although part of UEFA’s official pan-European artificial turf experiment, Dunfermline Athletic look like having to get old-fashioned grass re-laid at their East End Park home due to the hostility of the other SPL clubs.

Both Old Firm sides have let it be known that they do not like the plastic pitch one little bit – Rangers boss Alex McLeish claimed they cause more injuries than traditional grass and Celtic’s Martin O’Neill refused to debut on-loan Craig Bellamy on the controversial surface in January.

And it’s not just the big two from Glasgow who are opposed: the Scottish Premier League clubs voted 9-3 in support of Dundee United’s proposal to give the league`s five-member executive board the final say about artificial pitches on April 21st -- in effect a vote against artificial turf.

It’s a different story across Europe, though. The Swedes have been experimenting with plastic pitches before the advent of the UEFA trial and although the champions Malmö had a moan about GIF Sundsvall’s pitch (before they even played on it), most fans are happy, even if coaches and players are a little wary. Due to the extreme nature of Swedish winters, grass is thin on the ground (especially in the north) and many see these pitches as a way of bringing playing surfaces up to the standard of the bigger European clubs and allowing their use all year round.

At Örebro, another club in Sweden and one of the teams involved in the current UEFA trials, Fredrik Ornstein says there’s a feeling in Sweden that plastic pitches will raise the standard of the football as you need to be quicker and more technical. Even the national Råsunda stadium may have artificial turf in the near future. 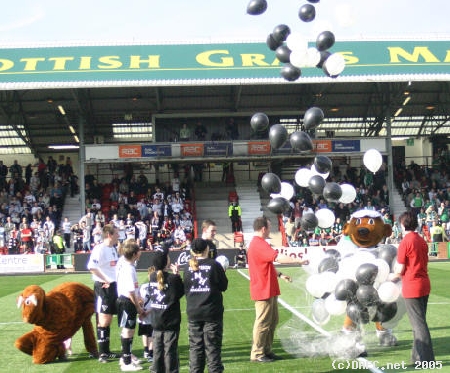 Celebrations on the laying of the second generation plastic just before the Hibs game, 19 Marcch 2005.

The Dutch already have two sides in their second division using artificial pitches – Cambuur Leeuwarden and Heracles. Jan Smit, the Heracles president, credits the pitch for leaving the Almelo-based club with fewer injuries and for improving their finances as they don’t have to postpone matches any more.

Bas Stitselaar, a Feyenoord season-ticket holder says that while most Dutch fans see artificial pitches as an unwelcome innovation taking the game further away from its traditional roots, it’s also seen as something of a fait accompli. The poor state of the Amsterdam Arena’s natural-grass playing surface means that an artificial turf is being seriously considered for Ajax and hockey clubs in Holland have all moved to playing on artificial surfaces over the last twenty years. Although its generally not popular, it is seen as the shape of things to come for football in the Netherlands

According to Sergey Belykh at Torpedo Moscow’s supporters club (also part of the UEFA experiment), the artificial surface at the Luzhniki stadium is more than satisfactory: “Of course, it is pleasant to play on natural grass, but the Russian climate makes it very difficulty and expensive to keep natural grass in a good state”. Russian coaches and players have complained that the surface is too different to normal grass but with Spartak and CSKA Moscow also playing their home matches at Luzhniki on occasional weekends, it seems that the surface is here to stay in Russia. Sergey claims 100% Torpedo fan support for the new surface whilst opposing fans are split fifty-fifty: “people are influenced by negative opinions -- especially after that have been beaten by Torpedo”, he says.

Brian Duncan at Pars fan-site DAFC.net wants to know why UEFA don’t back Dunfermline and force the SPL to allow them to keep a plastic pitch until the end of the two-year experiment – the lack of support, he thinks, is “shocking”.

Unfortunately for the Fifers, UEFA have washed their hands of the matter. According to their spokesman: “This is basically a domestic matter because what UEFA decided was to allow it for UEFA competitions.” However, that hasn’t stopped UEFA and FIFA asking to give a presentation to the Scottish Premier League meeting, so there is some cause for Dunfermline’s hope.

Despite the general thumbs-up across the rest of Europe, it seems odds-on that Scotland will not be losing the traditional sand-and-bog marshlands that pass for pitches at this time of year. But if UEFA deems the experiment a success in Sweden, the Netherlands and elsewhere and financial incentives are dangled in front of clubs again, those Scottish mudlarks had better enjoy it whilst they can.