For the second time in a fortnight, the Pars manage to make a game of it in Glasgow against one half of the Old Firm. Trailing to a Keddie own-goal and a soft Jelavic penalty, Cardle pulled one back, and although the Pars rarely threatened, in the end Rangers were content to see the game out.


It’s been a long time since I went followed the Pars to Ibrox or Celtic Park, and the experience hasn’t improved much in the meantime. The weather was terrible, as was the traffic, the usual congestion exacerbated by a breakdown, a hatchback sitting forlornly in the middle lane of the M8, its hazard lights winking feebly through the downpour. Parking was always likely to be a problem, and now my late arrival mean I had to park somewhere in the vicinity of Paisley, and thus am still none the wiser what effect inflation has had on the “pound to watch your car, mister” index over the last 20 years. Still, I got to the Govan West stand in time for kick off, and found the conditions weren’t as cramped as I remember, and the local bears seemed to be behaving themselves. That left the football, and in particular the teams. 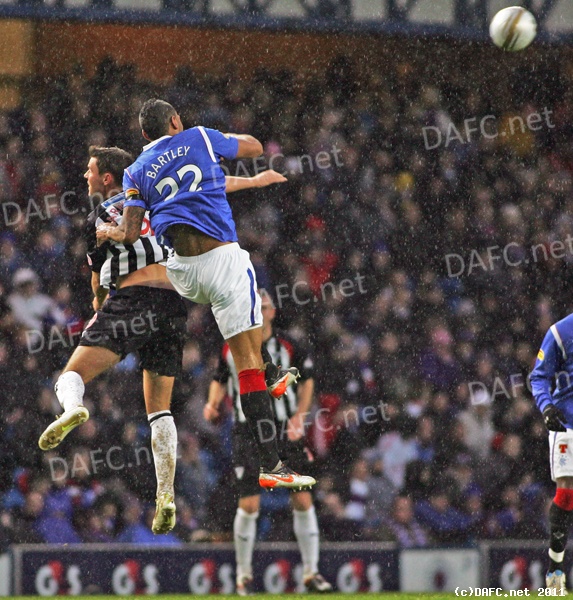 “Injury ravaged” was the term being trotted out, and quotations of lengthy injury lists gave the impression that we would see a side full off unknown youngsters and half-fit seasoned professionals. However, there were alleged to be 14 fit first teamers available, and closer inspection suggested the number might be nearer to 16, so whilst not ideal, still enough to allow some choice over 3 substitutions without throwing anyone in the deep end.

The Pars opted for a 4-5-1 – Dowie at right back and Boyle at left back flanking Keddie and Potter, Hardie and Mason as the base of a midfield triangle with Graham at its apex, Cardle on the left, Willis on the right, and Barrowman as sole striker. Gallacher would expect to be kept occupied in goals. On the bench we had Andy Kirk, Liam Buchanan, Ryan Thomson, another sighting of Pat Clarke, Chris Smith, Shaun Byrne and a first appearance for Scott Campbell.

Rangers looked to be along familiar lines too, despite Chick Young’s excitement on receiving the team-sheet – Thomas Bendiksen started alongside Nikica Jelavic in a 4-4-2 with Wylde and Aluko providing width.

The home team kicked off and it took 34 seconds for a clean shaven David Graham to lose possession, allowing Rangers to spring down the right through Aluko and pick out Jelavic who couldn’t keep his shot down and blasted over.

The game quickly settled into a pattern with the Pars taking a real battering. Rangers attacked down both wings, hitting he bye-line and cutting back to the penalty spot, and through the middle, playing pacey give-and-goes round the edge of the box. On the Pars’ left, Boyle and Cardle were giving a torrid time by Whittaker and Aluko in particular, whilst Dowie and Willis on the right fared little better against Wylde and Broadfoot. As if that wasn’t bad enough, the classy Davis would get the ball deep and be allowed plenty of time and space to set up more waves of attack. The Pars tackling was good, if a little desperate, with Potter, Hardie and Dowie all sticking a key foot in on occasion, and although Rangers had 4 opportunities, Gallacher still hadn’t been called on to make a save.

In fact, the first shot on target was at the Copland Road end – on a rare foray upfield Boyle and Cardle combined, Joe hit a reverse ball into the channel that Barrowman managed to wrap his foot around ahead of Goian but McGregor was untroubled.


As if woken up by this slight to their superiority Rangers hit back quickly and Gall made his first save, a fine effort, full stretch to his left to deny Aluko, the wet conditions meaning the ball slipped out sideways, but Cardle and Boyle were there to block the follow up – Boyle narrowly avoiding the slide down the slope into the advertising hoardings.

Another chance saw Edu blocked by Graham as Keddie clearing header found the American lurking beyond the edge of the box. Then disaster –a Whittaker chip caused more mayhem and with few options Potter chose a tight pass back to Gallacher, whose clearance hit Keddie and with the keeper now off-balance, he couldn’t prevent the ball spin agonisingly over the line: 1-0 Rangers.


Seven minutes later and it was 2. Aluko got the batter of Boyle who was fouling him all the way, at least until the former Aberdeen winger reached the box – Hardie arrived to defend, as did Mason, at which point Aluko fell over like a sack of spuds. Few were convinced of the merits of the penalty claim, but referee Steven Conroy was one, and it’s his decision that counts. Jelavic spotted the ball, Gall went left as usual, but ball didn’t – 2-0. 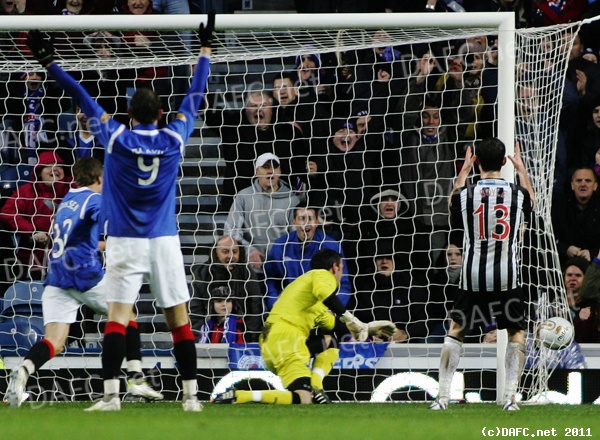 Two minutes later the Pars were amazingly back in it. Hardie had a bit of space, although not as much as Joe had, who was in acres of the stuff. Hardie to Cardle then, Joe runs at the defence in the inside left channel, cuts back on to his right foot and drill his shot in at McGregor’s near post. 2-1

And that was the way it stayed, as the fury of the Rangers storm had, like the overhead conditions, abated a little, although another good Gall save was required to keep the deficit to one.