The first event is a testimonial match against Sir Alex Ferguson’s Manchester United at East End Park on Wednesday evening. Some of United’s star players will take part as Dunfermline Athletic face the English side for the first time in their history.

Scott Thomson (Nipper) joined Dunfermline from Raith Rovers back in 1998. Bert Paton signed the player in the July of that year on a free transfer. Since then, Nipper has played in just about every position in the side with the exception of goalkeeper.

His debut was a rather crushing 5-0 defeat away to Celtic on the opening day of the 1998/99 season and the side continued to struggle as they settled for too many draws which would ultimately count against them in the battle to avoid relegation. Dick Campbell replaced Bert Paton during the season, but victories remained too few and far between. Nipper actually scored in two of those rare victories, both against Dundee, to open his goalscoring account for The Pars.

The 1999/2000 season had the sole aim of an instant return to the SPL for Dunfermline. An opening day 4-0 win over Inverness Caledonian Thistle saw Nipper open his account for the campaign, and Dunfermline eventually gained instant promotion via finishing in second spot behind St. Mirren.

With Jimmy Calderwood now in charge of the side, Thomson became a vital member of the side that progressed higher up the table in each consecutive season. A first pick in the team, there were soundings from both Dunfermline supporters and management for Thomson to be called up to the Scotland set up, but that never materialised in the end. 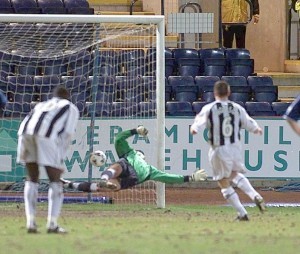 Nipper scoring against Dundee in 2002

Already installed as vice captain, the captain’s armband became available with the departure of Ian Ferguson at the end of 2001/02 season. Whilst Nipper was initially reluctant to take on the role of captain, he was persuaded by Calderwood that he was the man for the job and he relished the additional responsibility on the park.

Injury knocked Thomson in the second half of the 2002/03 season and he only featured once after New Year that campaign, and similar was to happen the following year. Having been a first pick during the Scottish Cup run, Nipper was to take no further part after the 3-0 win over Clyde and the captain was amongst other experienced players including Scott Wilson and Greg Shields who were all unavailable for Dunfermline’s first Scottish Cup final since 1968. 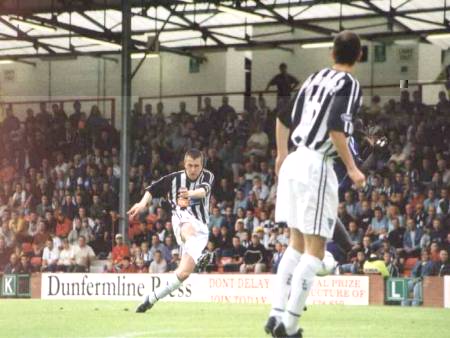 He was back in time for the start to the 04/05 season, having signed a four year deal presented to him by Jimmy Calderwood shortly before the manager’s departure up North. With Dunfermline in Europe for the first time since 1969/70, Nipper had the honour of leading the team out into the Icelandic national stadium for the match against Hafnarfjordur. Thomson was substituted during the return leg and could only watch as the tie was thrown away in the last few minutes……

Nipper continued to be a first pick, and captain, under new managers and has now played under Bert Paton, Dick Campbell, Jimmy Nicholl, Jimmy Calderwood, Davie Hay and Jim Leishman. 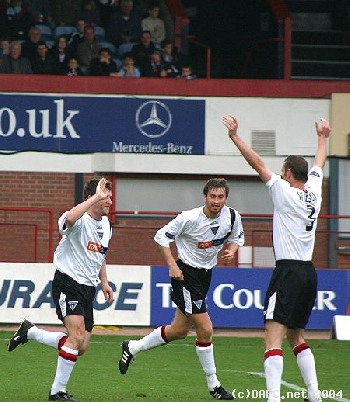 Another goal against Dundee!

Unfortunately, and to much frustration, no appearances have yet been made since Stephen Kenny took over in November last year. The horrendous injury problems suffered to his ankle have kept Nipper out since May 2006, though a return to the squad took place at the end of last season. A full pre season was played out in recent weeks, only for Nipper to be laid low by a stomach bug a couple of days before the season’s opener at Hamilton! Whilst he made the bench (again) he did not take part, but will surely be looking to make his full return to action next Saturday in the first game at home to Morton.

Goals never featured too frequently during Thomson’s time on the park, but there have been the odd vital ones against his name over the years: