Just as the Pars fans thought it couldn`t get any worse......it does with a 3-0 defeat at Stirling Albion in yet another spineless, lazy and inept performance by these so called full time professionals.

Surely there was going to be a reaction to last weeks hammering from the league leaders, Hamilton, and, therefore, it was no surprise to see a number of changes in the starting line up. There was certainly a surprise to see Sean Murdoch in goals instead of Gallacher.

Stephen Kenny kept faith with Sol Bamba who partnered Wilson in defence with Woods and Muirhead playing as the full backs. The midfield saw Stephen Glass play alongside Nicky Phinn with Scott McBride on the left wing and Bobby Ryan on the right. Stevie Crawford was back leading the attack with McManus.

Playing with a blustery wind behind them the Pars started the game well and Woods got in a good cross in 3 minutes that was cleared for a corner. A second corner followed immediately with Bamba heading over the bar.

The Pars had a free kick about 20 yards out that Glass curled round the outside of the keepers right hand post. Murdoch was called into action in 9 minutes when he cut out a good cross from the right.

Tam McManus seemed to be bundled off the ball in the Stirling area and desptie the shouts for a penalty from players and fans the free kick was quite incredibly given against Tam. The first of many poor decisions the pathetic Ian Brines gave against the Pars.

Crawford cut in from the right and played the ball across the goal instead of shooting.

In 12 minutes Stirling had a half chance after a typically poor clearance from Murdoch fell to the Albion and from the resulting cross the header from Cramb was just wide. Ryan was looking quite lively in these early moments and he had a good shot just over the bar in 13 minutes.

Stevie Crawford had another good run in from the right and as he closed in on the 6 yard area he drove the ball at Christie in the Stirling goals with the keeper saving well.

Stirling had a free kick in 27 minutes and the resulting header was just over but it was the Pars that had dominated this opening stage of the match so it was a real sickner when Stirling opened the scoring against the run of play in 33 minutes.

The Pars failed to clear their lines and Cramb latched onto a long through ball and had the simplest of tasks to slot the ball past a helpless Murdoch. That goal virtually silenced the large Pars support. There was almost a sense of depression settling over the players after making such a good start to the game.

McBride made a good run down the left and he managed to win a corner as his cross was cleared. McBride was then fouled in 43 minutes with the Stirling player, Forsyth, booked for the challenge. Glass had a shot deflected for a corner in 45 minutes. Half time 1-0.

Owen Morrison replaced McBride at the start of the second half. Nicky Phinn had a good effort just skimming over the bar almost from the restart. Morrison set McManus through in 48 minutes but he could do nothing and a few minutes later the striker could only drag a shot back to the keeper from 16 yards out.

McManus managed to pick up a needless yellow card for dissent after a free kick was given against him, although he had reason to disagree with Brines decision he should know better. 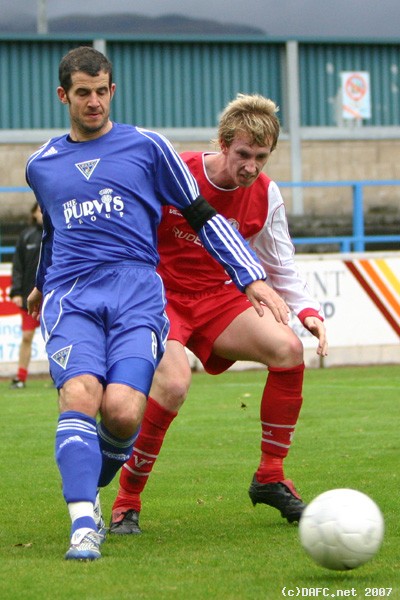 Crawford cut in from the left in 61 minutes and curled a shot past the far post without troubling the keeper.

There was a bizarre moment in 71 minutes when a Stirling forward went down in the box with the referee blowing for a penalty but the decision was changed when the referee eventually spotted the linesman`s flag up for offside.

It was only a temporary respite for the Pars who were now struggling playing against a very strong wind as Steven Bell scored in 75 mintues with a shot from 20 yards as the Pars hesitant defence stood and watched as a ball was cut back from the bye line after Woods and Wilson failed to clear.