McManus gave some great performances, and grabbed a couple of vital goals, as DA just missed out on safety in May.

It has been agreed however, that Tam may, be released from contract at the end of the 2007/08 season if Dunfermline Athletic do not return to Scottish Premier League status for the 2008/09 season.

The striker, who made his debut against Celtic in March this year, has quickly become a fans favorite at East End Park. Missing out on last month’s Scottish Cup Final after being cup tied it was always hoped amongst supporters that he would stay with the club for the forthcoming
First Division Campaign.

Tam today (Monday) said he was delighted to be staying at the club. “I am delighted to sign again for DAFC. The manager and fans made it an easy decision for me. 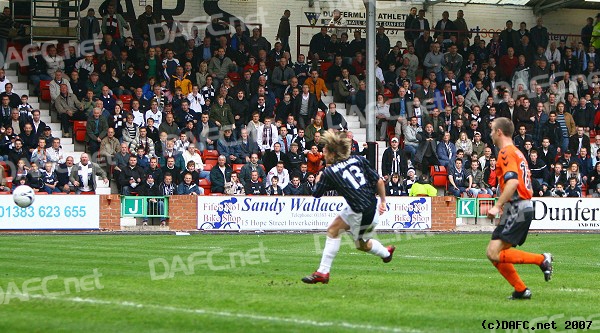 “They have been great ever since I arrived. I look forward to getting the club back to the SPL”

The DAFC board are also delighted with the news. “We are absolutely delighted that Tam has agreed to sign on for two years and we are
looking forward to him playing a major part in the promotion chase as well as the excitement he will bring to the games.”

Tam was born in Glasgow and signed up for Hibs as a trainee in August 1997. During his time at Easter Road he was loaned to East Fife, Airdrie and Boston United. At the start of 2005, after eight years at Hibs, he signed up with Dundee before joining Falkirk at the start of the 2006-07 season. After making only five appearances he came to East End Park where he has scored two goals during his seven appearances last season. 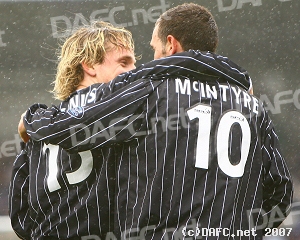 McManus struck up a partnership with McIntyre