It has been another mixed start for Dunfermline as the third quarter gets off and underway. The Pars travel to Tannadice on Saturday to face Dundee United on Match-Day 21 of the SPFL Ladbrokes Championship, following the sacking of Allan Johnston this midweek.

It looked like a productive opening to the second half of the campaign after a 4-2 victory over Falkirk in Grangemouth to end 2018 on a high. The New Year began just as brightly with Aidan Keena firing in, inside the opening 20 minutes, against Alloa Athletic on Saturday to send the home fans into raptures. An Iain Flannigan own-goal had Dunfermline on easy street as some silky football was on show by the hosts. A poor opening 45 minutes by the Wasps and they’d fight back to sting the Pars in the….bum!

Alan Trouten scored an unorthodox goal to get Jim Goodwin’s side right back into things within minutes of the restart. Dario Zanatta skipped away from Devine and exposed the wide-open space of the box vacated by the Dunfermline defence to somehow give the visitors a lifeline. It looked as if the hosts would hold on for a slender 2-1 victory, after a defensive and dogged second period. A hard-fought victory and 3 points, nonetheless, is all that matters, right? Well, not quite as Trouten snatched an equaliser at the death to turn everything on it’s head. East End Park was stunned as Allan Johnston’s side threw away a two-goal advantage to take just the solitary point out of an ultimately frustrating afternoon for all associated with the Pars.

Stevie Crawford has taken over as Head Coach

Only one defeat in 6, and unbeaten in 4, makes for good reading, however, disappointing draws against Alloa and Queen of the South, alongside losing 2-0 to bottom club Partick Thistle, has once again got the Fifers fans on the back of the management staff. Johnston was under severe pressure to try and resurrect Athletic’s stuttering season. At 4:45 on Saturday, the West Fife club were just 2 points behind Greenock Morton in the promotion play-offs and things looked to be on the up…5 minutes later and they remain in 7th spot, now 4 points off 4th place with Inverness, now down to 6th, with a game in hand which could seem them leapfrog back into that all important final play-off slot. Unfortunately, come Wednesday morning, the decision was taken to relieve AJ and Sandy Clark of their duties, which has saw the club restructure their football side of the business.

It has all went in quickly since that point, with Stevie Crawford having been appointed as Interim Boss and then permanent Head Coach within 24 hours of each other. Greg Shields has been brought in to assist his former Pars team-mate, with the coach having made the decision to return to Fife a quick one, having been employed while out in the USA. Both are former Dunfermline fans favourites and will know the expectations, the passion and the ambition of the club straight off the bat, which can only be a benefit. Chairman Ross McArthur was impressed by both which has saw them take over on rolling contracts until at least the end of the season.

McArthur has also added to the new footballing structure by adding another ex-Par into the new set-up. Jackie McNamara, and his consultancy agency, will advise the Board of Directors on off-field footballing matters. Dunfermline have also admitted to be on the lookout for another coach, with that process ongoing.

In the faces of the players this week will be Dundee United; a side who have changed managed over the course of the season and have gradually picked up. Csaba Laszlo was in the dugout the last time DAFC visited Tannadice, on the opening day of the league season. Things looked positive at full-time that afternoon, as Dunfermline gained a 3-2 victory over the Arabs. Robbie Neilson has since came in and replaced the Hungarian, with the Tangerines boss getting an early victory over Johnston at EEP in the previous encounter of the two clubs earlier on this season, with a 2-0 scoreline that afternoon. But, now, Crawford will come up against an old pal; having had managerial experience with East Fife, Crawford went to Falkirk in a coaching role before heading to Tynecastle. There, the duo secured promotion back to the Premiership at the first time of asking before consolidating the Jambos in the top division thereafter. A move to MK Dons materialised but the spell in the EFL was brief, as the side got relegated to League Two. Now, having gone their separate ways, it may be ironically coincidental that Craw`s first match in charge of his hometown club will be against Neilson, who he has spent so many years with as his right-hand man. 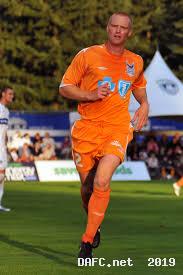 United have only one win in their past 6 matches, coming against Falkirk 3 weeks ago. Draws Morton, Inverness and most recently Partick Thistle have saw the City of Discovery club remain in 3rd place, just 6 points off the top of the table. A 5-0 defeat at home to high-flying Ayr United and a 2-1 loss against Alloa just 14 days ago show that the Tangerines aren’t undefeatable and there is nothing to fear – but, having scored in 13 of their last 15 matches in all competitions (with, ironically, the 2 matches they haven’t netted in, both being against Ayr), so, it looks as if the Pars will need to find their scoring boots when they travel over the Tay Bridge in a few days time.

“I was disappointed not to have taken the 3 points from the [Partick] match,” explains Neilson to the media prior to the Dunfermline match. “In the first-half, we didn’t play as well as we have or as we could. The second-half was a lot better; we created a lot of chances, but, didn’t have that final moment, which has been an issue for us for the last wee while. We gained a point over Ross County and Ayr United – I would’ve liked to have gained more but it is better than nothing.”

Aidan Nesbitt has signed from MK Dons and Neilson was pleased with the wingers debut last weekend.

“To be honest, I know his qualities as I signed him while I was manager at MK Dons, so, I know exactly what he can bring to the team. He is, obviously, not quite there for us fitness-wise yet as his last full game was in October. He played 45 minutes for us on Saturday and in his first 30 minutes, I felt he was very, very, good, and then fatigued a little bit: he played in a bounce game last night at Spartans and done really, really, well again, getting 60 minutes under his belt, so, he is the type of player that we need…he has that final pass, he sees things that other players don’t see and he is a good age, so, it is a win-win for us all; hopefully he can do well for us and we can progress things from there." 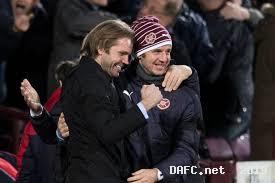 Friends Re-United: Neilson will face-off against Crawford this weekend!

Looking towards this weekend’s match, the former Hearts gaffer commented:

“I watched their game and they were really unlucky. They played really well in the first-half but Alloa came back into it and scored a last-minute equaliser. We know, from experience, that Alloa are a difficult team to come up against so we know it is a tough match this weekend. I have said before that I believe the Championship is a difficult division where anybody can beat anyone: look at Falkirk’s result last week away to Ayr, for example; Morton beating Ross County, as well…we just need to try keep winning and picking up points. We would love to have 3 points to our name every weekend but sometimes you just got to accept a point and keep moving forward. I do realise that games are slowly dwindling but I believe if we can recruit well in this January Transfer Window then I feel we can do well heading into the final part of the campaign. 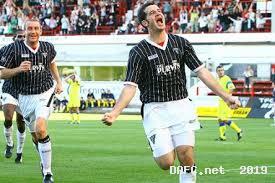 More of this on Saturday, please, Stevie!

I think everyone agrees that we need to improve and get better; we need to score more goals and win more matches. There’s been games this season where we have been in good positions but we don’t finish teams off and that comes back to haunt us – when you are 1-0 up, in any league, and you are on top, there is always the possibility the other side can get a break-away or a free-kick or a corner and we have been punished for that, so, we need to bring quality in to add to what we have in the squad already to make sure we can start putting teams to bed. We are looking for good players, with good character as playing for Dundee United is a big responsibility and we need to have players who are psychologically ready for winning matches: even if they have come from a higher division, if they are mentally used to losing, week-in, week-out, then, they may not be right for us as we need winners as we have that kind of pressure on us here. It isn’t just about how good they are technically or their movement; we are looking into their background, we are speaking with people they have worked with and under previously as we need to make sure we bring in the right ones. There is no room for mistakes – there has been mistakes in the past and we are trying to rectify that, but, you can’t just go in two-feet first at the beginning of the window and accept anything that is on the market, you need to take your time and do your due diligence.”

Cammy Smith and Morgaro Gomis have joined the Tannadiice outfit since the press conference, which took place on Tuesday, which will only increase the options available to the management staff of Dundee United. An intriguing encounter awaits as Crawford prepares to go head-to-head with a friend, who will become a foe, for 90 minutes on Saturday, at least...

Lets get right behind Stevie and Greg as we move forward in to the next chapter of our 133 year hstory: "Come On Ye Paaaaaars!!!!"