Trip to Tannadice next up for Pars

A 2-1 victory was achieved at Tannadice earlier in the season (see link below) thanks to goals from Gary Dempsey and Stevie Crawford. A similar result would be more than welcome after the stuttering run of results of late. The win at Easter Road a fornight ago is surrounded by poor defeats, not least the 2-1 "performance" at Motherwell a few days later.

If Dunfermline are to maintain any kind of challenge for a UEFA cup place, a win is needed at the home of struggling Dundee United who now occupy the bottom spot in the league.

Ian McCall will be out to regain the fine form his new troops showed in his initial matches in charge, before the wheels came off with their recent 3-0 defeat at Aberdeen.

The ex-Falkirk man had plenty to say before and after the League Cup tie between the sides earlier this season, so will no doubt be out to impress against The Pars.

The win at Tannadice earlier this season was the first in the SPL, and a rare away win for Dunfermline. The previous win at the ground was the now famous game towards the end of the 1995/96 season when all the odds, and the media, were stacked against a Dunfermline win.

On the 27th of April 1996, Dunfermline lined up in front of a very vocal Pars contingent in the crowd of 12,203 with the following side:

Craig Robertson passed a late fitness test to captain the side in what turned out to be an emotional and legendary performance from Dunfermline Athletic. Ever present player of the year Andy Tod lined up in the back line and put in an immense performance alongside Ivo Den Bieman as Dunfermline would eventually have to hang on with just 10 men.

Dunfermline took part in their then regular "huddle" before kick off in front of the large United crowd who had gathered assuming a win would give them the title ahead of The Pars.

The papers that morning were all full of what United would do to kill off the Dunfermline challenge. After being ignored all season by the press, The Sun ran an article on the day of the match asking other managers their thoughts on the outcome.

The match itself did more to dispell concerns about Dunfermline`s crashing bottle than any verbal response ever could.

Petrie edged Dunfermline ahead to put Dunfermline one nil up and silence the United crowd.

His afternoon turned sour though, when he was harshly red carded for a challenge on Maurice Malpas which many later realised should not have been a sending off offence.

It was then backs to the wall stuff, as the defence alongside the superb Westie kept out every shot and cross that United could muster.

1-0 was the final result and Dunfermline had their season`s destiny in their own hands going into the last match of the season.

Needless to say, the Airdrie game is another story for another day, but that afternoon at Tannadice will remain an important one in the modern day history of Dunfermline Athletic. 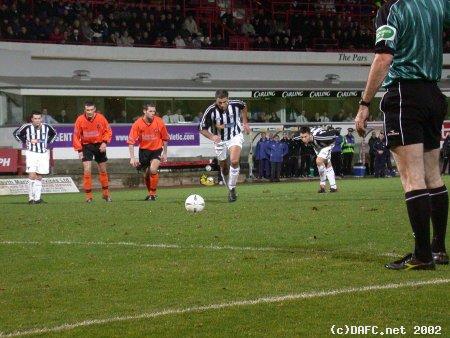 Brewster scored a double when the sides last met.

Back to this week, and predicting a crowd anything like the one back in 96 would see you carted off to the funny farm. Tannadice, to be fair, is one of the better away grounds. A view from the side of the pitch and fair pricing of Ł14 from the old enclosure is far better than most.

A large and vocal Pars support went up to the last game there, hopefully the same will take the trip this time round. A win would be the ideal way to set up the weekend.... 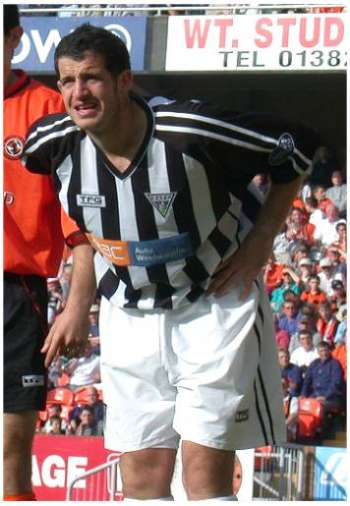 Craw played a blinder at Tannadice last time round.