Penalties are never the best way to settle a cup-tie, but few Pars fans will be complaining after a night of drama at Pittodrie saw the Pars progress to a Scottish Cup Semi-Final date with Falkirk. It wasn’t pretty, but it was brave and it was battling, the Pars more than matching their higher league opposition before producing the goods when it mattered.

There was an unexpected change to the Pars line-up, with the sad news that Sandy Shields had passed away earlier that morning after a long illness. Although Greg didn’t want to let his team-mates down, it was right that he sat this one out, there being a more than able replacement at centre back in the form of Nipper Thomson, with Calum Woods coming back in at right back after his league suspension. Graham Bayne returned to lead the line after his head injuries had healed sufficiently and the Pars lined up in an unusual 4-2-3-1 formation – Gallacher in goals, Woods, Thomson, Shields and McCann across the back, Glass and Burke both deep-lying in midfield with Phinn further forward, Mole on the left, Bell on the right, and Bayne alone up front.

The Don s adopted a more conventional 4-4-2 with Aluko and Smith playing wide, and started much the better, with an early chance for Mackie and then Gallacher having to be alert in the 3rd minute to tip over Kerr’s glancing header for the game’s first corner.

The first 10 minutes was mostly Aberdeen, but Phinn (with an attempted lob) and Bayne (with a snapshot from distance) had a couple of half-chances, and although these were never close, the fact that opportunities were arising seemed to settle the Pars down and the early storm was ridden out.

Although the playing surface at Pittodrie has improved, it is still a bit bumpy (damage caused by Crane fly larvae, apparently) and Glass got caught out by a bobble when bursting forward in 15 minutes, Aberdeen hitting on the break but Aluko blasting over. 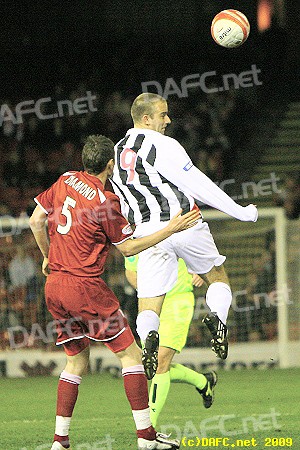 With Wilson and Thomson winning absolutely everything in the air, the Dons were reduced to hitting from distance, Gallacher stopping a deflected Foster effort in 28 minutes, before Bell squandered the best chance of the half. With the luxury of Burke as cover, Glass got forward on the left and although Diamond snuffed out Bayne’s initial threat, for once Aberdeen couldn’t get the ball clear – it came back to Bayne and this time Burke surged forward into the box, rolling back the years to beat his man on the outside before finding his team-mate with a delicate chip. However Bell, with the goal at his mercy, headed straight at Langfield.

With the Pars using the aerial ability of Bell and Mole to hit the ball early down the flanks, Aberdeen were put more on the defensive and although Diamond had a header over the bar and Burke a late effort, neither keeper was troubled and half-time arrived with the teams all square. 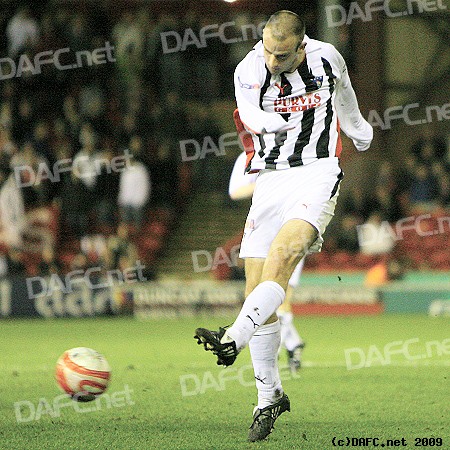 The second half started in similarly cagey fashion, Smith and Aluko briefly swapping wings the only tactical change. Phinn’s header from Glass’s cross in 57 minutes gave Langfield more trouble than it seemed to warrant, the ex-Par electing to tip the ball over the top for the Pars first corner, but the Pars new short-corner routine left everyone flummoxed when the linesman’s flag nipped this cunning ploy in the bud.

No Scottish Cup tie is complete without at least one stramash; Diamond had been allowed to press forward unchallenged in the 64th minute, the centre-back eventually winning a corner on the right. From the delivery there was a modicum of chaos in the Pars 6 yard box, with Wilson flying backwards, Gallacher slipping and the ball seemingly sitting stationary before Bayne was first to react and hack clear. 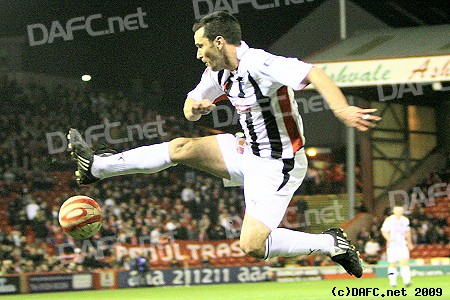 Encouraged by this let-off the Pars forced two saves from Langfield. Thomson’s long ball forward was controlled by Mole, one quick one-two with McCann later, Jamie was in the box belting it towards the near-post but his namesake beat the ball away; a couple of minutes later the Dons’ keeper was in action again, diving to his right to take a Woods effort from distance.

Attention turned to the benches, as both management teams had to weigh up the option of making a match winning change, with the possibility of extra-time and even penalties being a factor. Considine replaced the injured Mair in a straight swap, before Jimmy Calderwood admitted defeat in the battle of the tacticians, bringing on Duff for Maguire as the Dons matched the Pars set-up. With 10 minutes of the 90 left, McIntyre made a double swap, Muirhead on for Mole and Loy on for Phinn 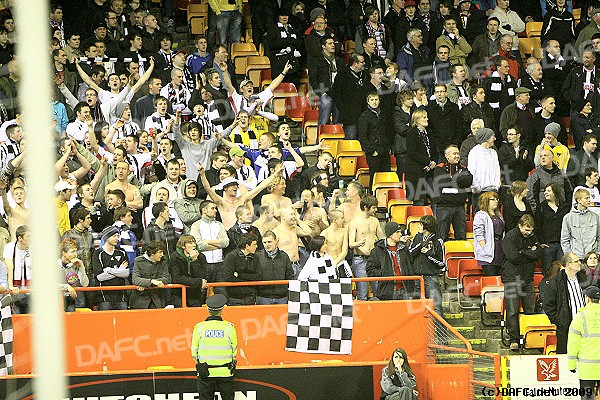 Bell had a half chance in 85 minutes, but his hurried half-volley was too high, before the Pars had a couple of alarms. Referee Eddie Smith penalised Scott Wilson in 87 minutes for what looked like a shove, 28 yards out, right smack in Charlie Mulgrew territory. However, just as the defence had all night long, the wall stood tall and firm, deflecting the ball for a corner. Then with less than 10 seconds left, Aberdeen had a chance to win it, with a similar goal to their strike in the first tie. Smith cut inside from the right, evading a despairing Burke tackle, sucked Woods in before feeding Aluko on the left of the area. With time seemingly standing still, Aluko’s shot beat Gallacher… but not Wilson, Gallacher falling on the loose ball. Full time, and the match still goalless.